Who are you? Chances are much of what you use to answer that question will come from the elusive and intangible qualities you call your personality. From an early age you’ve probably picked up many labels describing your personality from introvert to extrovert, funny or somber, friendly or withdrawn.

If you’ve matured in our culture chances are the terms, “be yourself” have been pounded into you with an almost fanatical piety. Society wants and expects a consistent personality from you. Unfortunately, what happens when ‘yourself’ simply isn’t enough to get what you want?

I am going to answer this question with an unequivocal yes. You can evolve your personality into whatever you want it to be. I can assert this statement with such confidence because I am the product of such a transformation. I look around at my life and who I am and I know for a fact that none of this came through accident, but I earned everything.

I can tell you that this is the most fantastic feeling in the world. To look at a huge group of friends and remember times when I struggled to have poor relationships with one or two people. To know I get respect and appreciation from people when I once was easily disregarded. To know that I feel happy, confident and secure in myself where I was once almost anything but.

No matter whether you already have a great personality that has given you a high quality of life or you are struggling to achieve results because of who you are, you can improve and change. The best thing is that the further you improve the happier you become. Some people take their personalities for granted and can’t possibly appreciate their life on the level of someone who recreated themselves from the ground up.

Your personality is simply the appearance and impression you give in any relationship or human contact. So when you ask someone else to describe you they aren’t really describing ‘you’ but your personality. Personality includes your non-social behavior as well as those behaviors trickle into the impression you leave upon others.

Personality is also a warped perspective. What do I mean by this? Simply that when you view your personality through your own activities, each activity holds equal weight. When you spend an hour writing a journal entry this holds the same experiential weight as spending an hour out with friends.

Unfortunately personality is warped because those behaviors directly associated with communication appear far more central than private activities. So how you behave in that hour with friends is possibly ten to a hundred times more relevant than how you behaved when writing that journal entry. Although because all activities blend together, that private event still influences your personality it does so to a far weaker degree.

Instead of changing your personality, evolve it. I think this verb is far more accurate in describing what will actually happen. You can’t specify an end product for your personality because as you evolve it, your own perceptions will change drastically. Instead all you can do is specify a direction and slowly sculpt the changes into what you desire.

Personality evolutions are a huge investment. In fact, it will be the biggest investment you ever make in your life. Evolving your personality will be a long and arduous process. That is why so few people ever successfully achieve it. The good news is that, coming from someone who has and is evolving his personality, it is probably one of the most fulfilling things you will ever do.

Is it simply better to just accept who you are and live your life? I would have to say no it isn’t. Evolution isn’t just for desperate people with horrible personalities, but I think it is truly the most comprehensive form of growth. Unlike setting a goal or mastering a single skill which offers a bit of growth, a complete evolution of who you are makes quantum leaps in the quality of your life no matter where you currently are.

So how can you start evolving your personality?

Of all the practices to come out of neuro-linguistics programming, I think the most valuable is the relatively simple technique of modeling. Unlike some therapy or programming techniques which may be complex and have dubious claims of efficacy, modeling is incredibly useful and it forms the fundamental ingredient in personality evolution.

Modeling actually works very similar to how you learned virtually all your behaviors and skills. You learned by watching others. When your parents were making funny faces and uttering random sounds you copied these to form language. You did the same process for much of your early development. Unfortunately years of lecturing and reading might have lead you to believe that your best understanding will come from a book or speech.

Here are some keys when trying to model another personality to absorb characteristics you want to evolve in your own personality:

Unfortunately few people have a near perfect set of behaviors to form the ideal personality. Maybe you want to become really funny and so you study Jerry Seinfeld’s comedy routines. Although much of what he does adds to comedic impact, many of his idiosyncracies may be neutral or slightly detrimental to his comedy. By viewing dozens of funny people and picking up common characteristics you can adopt a personality trait without becoming another persons clone.

Rarely is there only one effective personality in any area. Some people can achieve similar results with completely different styles each with their own strengths and weaknesses. When modeling, pick the successful traits that are closest to where you currently are. So if your humor is more naturally derived from observation, trying to model someone who exclusively uses stories may not be the best choice.

3) Look for both Behaviors and Beliefs

When modeling it is important not only to understand the behaviors of success but also the beliefs that create those behaviors. If you want to be more attractive to the opposite sex, just understanding what attractive people do isn’t enough. What they believe internally that causes it is just as important as root beliefs often trigger thousands of peripheral behaviors.

Now that you have taken a look at successful people you need to start transferring those observations to part of your own personality. This happens through making small improvements in specific areas. Trying to completely overhaul your personality is impossible, so making minute changes one at a time can accomplish this. There is an old joke that asks how do you eat an elephant? One bite at a time.

A few months ago when I decided to focus more on forming deeper relationships and entering the complex world of dating, at first I was frustrated about how my results differed from other men. Some had a natural charisma that drove women towards them and others simply had more experience as I had never given the area more than fleeting attention during my hectic highschool days.

Rather than get upset or settle into a lower quality relationship, I decided to evolve my personality to become the kind of person who could naturally attract. By modeling and studying what areas of my personality were insufficient, I started slowly introducing these aspects into my own life.

I’m still very early on in this stage of my evolution (it was only a few years ago that I evolved from being completely unsocial to the opposite extreme), but already I have been impressed by my growth in this area. The key I used to create this growth was simply to make small improvements rather than try to do everything at once.

Each of the personality characteristics I identified I slowly integrated into my personality until they became a natural part of who I was. Becoming comfortable with physical contact (often referred to as kino in dating self-help circles), adopting a more confident body posture and gestures and becoming better at using humor were just a few of the many details I slowly absorbed.

Many women offer the dating advice to men to just, “be themselves”. Basically few women want guys to hide behind canned pickup lines or act fake, but want to experience the real personality. But for guys who can’t naturally attract women this leaves them without an option. The option of course is to take the qualities attractive men have and integrate them deep into your personality so they are part of you and not just an act.

Outside In and Inside Out

There are two methods to actually enact personality evolution, and the most effective route is to use both of them simultaneously. The first is the outside-in approach of altering the details of your behavior. The inside-out approach is to change your belief system and way of thinking to transform your outer personality.

Both of these methods are crucial to evolution because without each other true change cannot happen. Change behavior without beliefs and you will end up swatting millions of wasps while avoiding the nest. Change beliefs and you end up getting stung by all the wasps still outside. Only both can solve your problem.

Look at the image representing your personality below. You have a large circle with your conscious behaviors at the edges and your subconscious belief structure at the core. 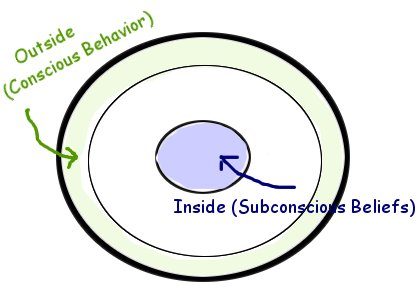 The outside in approach is to start finding behaviors of success and begin to integrate them into your personality. So if you wanted to become more sociable this could start by simply saying hello to people as you walk by them. 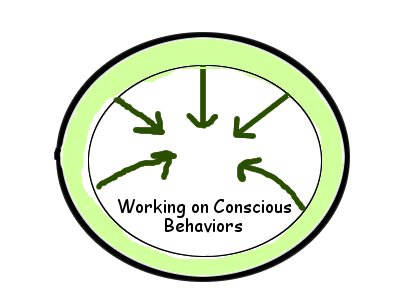 The inside out approach is to find the beliefs that create success and install them in your life. Although beliefs are the root of your behaviors, they are an order of magnitude more difficult to change, but still necessary. By believing strangers will appreciate a conversation, you can become more sociable. 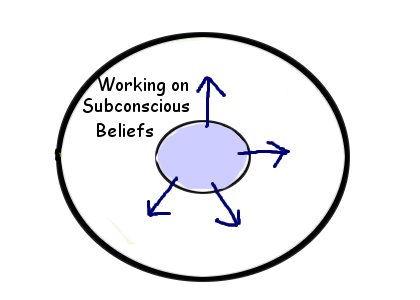 Of course the most effective strategy is to combine them both. Not only alter your behavior but change your beliefs. When you do this personality evolution becomes rapid until the person you are becomes the person you want to be. 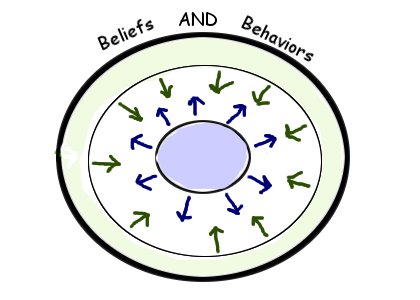 Will People Dislike Me?

People hate it when others act inconsistently and it doesn’t get more inconsistent than evolving your personality. By definition personality changes is trying to become something you are not. As a result their will be plenty of close-minded people that might scorn your attempts at change and improvement.

Ignore those people. Because for every person who doesn’t want you to grow and improve there are a thousand new people just waiting to appreciate what you will become. At first my big worry was that I would lose friends and relationships by evolving my personality, and I have. But what I never would have expected is just the sheer volume of higher quality relationships that would replace it.

Don’t use false loyalty to your past as an excuse to prevent growth. Decide who you want to be and become that person. If you want to be social, attractive, funny, likable, passionate and strong become all those things. Nothing is preventing you from becoming who you want other than yourself.