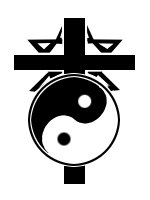 Are you in a spiritual confusion? We live in a world where science, philosophy and various religions are in continuous conflict. You may want the certainty, values and purpose religion offers but this often means being forced to accept internal conflict. You may like the part of a religion that says love thy neighbor but dislike the parts that say you should persecute homosexuals. Faced with these problems I came to the point where I realized no one religion was the right one. So my solution was simply to make my own.

I’m hardly a philosopher or theologist. I’ve never even been to a church service. Although I descend from roughly three generations of atheists/agnostics I guess I would be Anglican if I want to trace it back. I don’t believe in God, Heaven, Hell or that there are specific moralistic laws guiding the universe. I believe our view of science and philosophy are horribly limited at best and simply agreed upon set of truths at worst.

Despite offending the beliefs of over ninety percent of the world with the above paragraph, I do believe that religion is a necessary component of life. Although there may be a lot of baggage with it, religion serves a very fundamental purpose in peoples lives. Religion offers explanation and meaning.

Curiosity is a strong motivator. Religion explains why the universe is the way it is. Religion answers the questions of why we are here, where are we going and what reality looks like. In this sense, science too is a religion, if an incomplete one. Most religions will answer all the questions of explanation with little or no evidence while science refrains from too much speculation.

The second offering of religion is meaning. Religion offers a code of values and principles for living. It is the code that tells people how to live and why. I consider your values and principles like being your strategy for life. If you don’t have a cohesive strategy, you don’t know what opportunities to take and which ones to ignore. Worst of all, without a cohesive set of values you don’t have meaning. Without meaning you can never know whether you are winning or losing the game of life.

Virtually every major human society throughout time has had religion. This is because the purpose that religion serves is as crucial to survival as food and shelter. Being someone who is in the unique position of having no background religions affiliation, I have a special privilege. Instead of swallowing an entire set of rules and dogma, I made my own.

Creating Your Own “-ism”

Some people disillusioned with religion and faith end up abandoning it entirely. Like throwing away all your clothes because some of them make you itchy, you end up throwing away the very warmth and shelter you needed those clothes for. The solution to itchy clothes isn’t to walk around naked all the time, but to make clothes that don’t irritate.

The reason you wear clothes is to keep the environment from damaging your body and to convey your identity to the world around you. Clothes have a function. The function of religion is to provide explanation and meaning. Whatever spiritual beliefs you have ultimately work towards these two goals. To understand how you exist and to know why.

If you don’t like the clothes you are wearing, the place to change your wardrobe is to go shopping. I worked on my belief system by researching as many different philosophies as I could. I was already well aware of Judeo-Christian philosophies given my Western heritage, so I read about Buddhism, Zen, Daoism and Greek philosophical traditions.

Science is a good way to help formulate your belief system. Although theoretical physics may seem like a dull subject to most, it fascinates me because I believe that it really carves deep into the quest at why the universe is the way it is. I’ve also read a lot on evolution and biology for a greater understanding at why life is as it is.

From this point it is good to look towards philosophy. Classic philosophers such as Descartes, Socrates and Nietzsche offer many unique perspectives. Even self-help authors have their own belief systems to offer meaning and explanation. Authors like Eckhart Tolle, Steven Covey, Steve Pavlina and many others have contributed to my belief structure.

Shadows cannot live in the open sun. Corruption cannot survive in an open mind. Many people are afraid to really experiment with their belief system because they are worried about straying from some ideal path laid out for them. This is ridiculous. Exploring alternative ideas doesn’t weaken your ideas but makes them stronger.

Trees and the Forest

If you want to be healthy you need to understand the fundamentals of eating well and exercising. Beyond that minutia such as which nutrients to eat and whether to run or swim are small tweaks. Similarly, you need to distinguish between the fundamentals and the minutia in your own belief system.

When you research other belief systems it is easy to get caught up in the minutia and miss the bigger point. You can look at the golden statues, meditation and reincarnation beliefs of Buddhism and miss the more fundamental aspects of pacifism and non-duality. You can look at the crucifix and quote the Bible without looking at the fundamental aspects of love and service.

Some of you may think I am being too casual with my beliefs, that things such as values and spirituality shouldn’t be the content of a personal experiment or a whim. I think the opposite is true. I believe that your core beliefs to give your world explanation and your life meaning are so important, you have to construct your own.