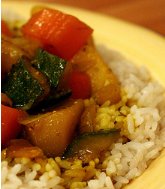 Are you as healthy as you would like to be? Whether you are already a marathon running, whole foods vegan or are stuck in the typical fast-food lifestyle, any dietary change can be difficult. Looking out at the barrage of health information it is easy to get overwhelmed. Should you get more Omega-3’s, fiber or reduce your cholesterol?

I suggest taking a different tact. Try gradual dieting. The surest way not to start is to do everything at once. Although I certainly have room for improvement, I eat a healthy vegetarian diet that focuses on whole grains, vegetables and unprocessed foods. But I never would have got to this point if I tried to do it all at once. Each dietary change I made formed another stepping stone to further changes.

Most people immediately start an entire dietary change all at once. Because the human body is designed to resist drastic changes to the environment, carrying out this change will be almost impossible. Even if a change is for the better, it takes awhile before your body adapts to the food and starts to enjoy eating it. Gradual dieting allows you to focus on small measurable changes that eventually add up.

There are several methods you can use to diet gradually. I’ve found restocking, replacing and trial periods or combinations of them to be the most effective.

What do you eat? The answer is probably close to whatever happens to be in the kitchen. One way to gradually improve your diet is simply to pick one unhealthy food item in your house and replace it with a healthier option. This could mean buying whole wheat bread instead of white bread, juice instead of cola or mixed nuts instead of potato chips.

The point is to focus on one item at a time. If your restocking is gradual enough, you probably won’t even notice the minor changes. The time you need to pay attention to your commitment here is at the grocery store. After purchasing healthy foods your diet will probably automatically make a small shift to reflect what you have in stock.

While restocking focuses on the grocery store, replacing focuses at the dinner table. The goal with replacement is to switch an item you already consume routinely with something else. Instead of having pork one night you could switch it for a vegetable stir-fry. Simply pick out a food you eat consistently and decide to switch it out for a healthier choice.

Replacing is necessary when your in an environment where you don’t have control over your options. Living at University, I eat most my meals in a large cafeteria. Consciously replacing common food items for healthier substitutes was the strategy I used to maintain a healthy diet.

Ideally you should use a combination of all three. Restock your kitchen to replace an unhealthy item for a healthy version. Replace any unhealthy food for healthy versions and set a trial period to monitor and commit to the changes.

I like to follow the K.I.S.S. rule whenever I’m making a change. Changing your diet isn’t any different. Unless you are reaching the point of world class athlete or haven’t eaten anything but raw veggies in years, keep your diet change simple. If the easiest way to procrastinate is to overwhelm yourself with change, the easiest way to waste your time is to focus on what isn’t important.

Focus your diet changes on small but significant factors. If you aren’t sure, here are a few obvious places to start:

People fail to make diet changes not because they don’t know what they should be eating. I believe the real culprit is trying to do everything at once. Slow down, you have a lifetime to eat and a lifetime to be healthy. Remove dietary oppression by dieting gradually.