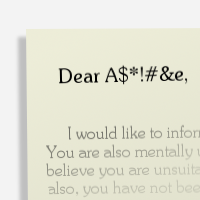 The most popular articles on this website are also the posts with the most negative comments. It took me awhile to realize this, but hate mail can actually be a sign you’re doing something right. Truly awful stuff gets ignored. It’s only the ideas that are new, involve risks or push boundaries that get hate mail. Those are also the ideas that change the world.

If everyone supports your goals and dreams, you probably have no real ambitions in life. If they laugh at you, mutter something sarcastic or send you hate mail, you might actually do something important.

When I started this website two years ago, I didn’t get a single vote of confidence. Most of my friends and family were ambivalent, and others were completely negative. Today, I received thousands of comments of support and many people who were skeptical have given me their full confidence.

Don’t Feel Bitter About the Lack of Support

It’s easy to become bitter if you don’t have any support for your ideas. You may rationalize that other people are jealous, uncaring or out to sabotage you. I don’t think any of these are actually the case.

I feel the real culprit behind a lack of support is that they don’t have access to your vision. Even the most empathetic people don’t have access to your brain. They can’t think your thoughts. They can only look at the digested pieces of your idea after you try to communicate it. And, unfortunately, the most important ideas are difficult to communicate.

Even if the other people can see your end result, they can’t see the motivation that will carry you there. Unless you have a spotless record for achieving the impossible, its too easy to see the obstacles but not your drive.

Don’t blame other people for not supporting you. It isn’t really there fault, and it can often be a sign that you are doing something original and important. Instead, put your focus on proving your idea. Go out and put it into practice. Don’t sit around and wait for an invitation.

There are many areas of life where getting advice is important. But don’t ask for advice when you want support. If you have a goal or dream, your subconscious has already made the decision to pursue it. Asking for advice once that decision has been made can only dull your resolve to move forward.

Don’t ask for advice on your goals. If you want to start a business, don’t ask other people whether you should. They can’t tell you what your desires are. The only useful time to ask for advice is on implementation. Once you’ve made the decision to pursue the goal, then it makes sense to ask people for tips on how to do it.

Asking advice for a goal is really just asking permission. You want someone smarter than you to validate your desires by saying they are realistic. When you ask permission to go after an idea, you’re giving up power to the other person.

The critics might be right. You might be a half-wit whose ideas are impossible. You might be too incompetent to execute them. You might fail. But failing is better than sitting on the sidelines, always unsure about what you could have done.

I’ve received my fair share of hate mail in the two years of operating this website. Some are well-thought and genuine critiques. Others are gut-reactions to something that challenges their assumptions. I’ve even received personal attacks and borderline threats from people passing by the site.

Over time the hate mail becomes dwarfed by the support. Once you start bringing your ideas into reality, people who were previously skeptical become supportive. If everyone could share your vision it wouldn’t be yours.