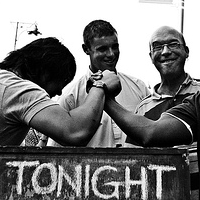 One way to split up the world is to divide areas of life into those that need opportunities versus those that only need effort. For example, imagine you are writing a book. Writing a book is mostly a matter of effort. Having a stroke of creative genius helps, but ultimately finishing is about putting in the effort to write every day.

Compare that to publishing a best-selling book. Effort doesn’t seem to matter as much anymore. Many authors will pour their soul into a book for years only to sell a few hundred copies. While other authors can churn out best-sellers in a series. Publishing a best-seller is about having the right opportunities, effort isn’t the limiting factor.

Are You in an Effort Field or an Opportunity Field?

Knowing the difference could be critical. If your goal is in an effort field, when you fail, your response should be to work more effectively. If your diet fails, you need to figure out how to work more efficiently to get what you want. Not so if you’re in an opportunity field. Simply putting in more hours writing your book won’t necessarily make it a best-seller.

If you imagined your decision-making routine was turned into a computer program, it might look something like this:

Although there are solutions to use when you’re in an opportunity field, they aren’t always as obvious. Often these solutions are nearly hidden. Heck, if everyone knew the recipe for writing a best-selling book, that recipe wouldn’t be very effective, would it?

A good example of an opportunity field is blogging. (I know I overuse my blogging as an example, but it still works) Almost all of the boosts in income I’ve made through running this blog were unknown to me when I started. In other words, almost every increase came from new opportunities.

That doesn’t mean effort wasn’t required. There was a lot of effort placed into writing and finishing projects. Just that effort wasn’t the only ingredient, or even the ingredient in short supply. That’s important to remember when dealing with opportunity fields. A better way to describe the distinction would be effort fields versus effort-plus fields. (those that require effort AND something else)

Visible Paths Versus Stumbling in the Dark

Another way to compare the problem is that effort fields have known paths. You can clearly see a path from point A to point B in front of you. Although succeeding on a diet might require discipline, the path from being overweight to healthy is fairly straightforward (don’t eat junk, eat less).

An opportunity field is more like stumbling in the dark. If you start a business, you may have many ideas for revenue generation, getting sales, keeping customers and fighting the competition. But, unless you have a lot of experience in the industry, most of these guesses will turn out to be wrong. It will take a lot more stumbling for opportunities than walking a clear path.

How Do You Play in an Opportunity Game?

As I mentioned before, the effort game is easy. Your solution to failure is simply to work harder or develop a more effective strategy. The opportunity game is harder. How do you play a game where working harder won’t help you much?

There are a couple strategies I’ve found helpful when trying to achieve and effort stops being important. Here are a few of the best ones:

Ben Casnocha was the first to suggest this strategy. The basic idea is that you expose yourself to as much randomness as possible. Go to the conferences only a few people are visiting. Take the bizarre class for your final elective. Read the magazines other people aren’t paying attention to. Talk to strangers on the bus.

If you come into contact with a lot of randomness, you’re more likely to stumble on a great opportunity than if you stick with what you know. I’ve tried to apply this lesson with this website. When I get an interesting e-mail, I try to do some follow-up before seeing if I have time. This allows me to collect opportunities that I might have rejected too quickly.

Which is a better approach in an opportunity field: spending 2 years writing the perfect book to try reaching a best-seller, or writing 4 books in the same time period?

It’s my opinion that the latter is a much better strategy. In an opportunity field, being able to fail quickly helps you remove dead-ends without wasting as much time. Instead of doing this, however, most people try to “beat the odds” by investing in longer projects which fail slowly (if they even get finished).

The first project I released for this website had a mediocre response. Despite that, it was actually the longest project I’ve worked on for the website and took the most effort. The reasons it failed are obvious to me now, but they weren’t at the time. If I had released a prototype after a month, I would have seen my errors and saved five months. The lesson: fail fast, fail early.

A strategy many people take when they find themselves in an opportunity field is to follow the leaders. They look at what the most successful people do and try to replicate it. On the surface, this doesn’t seem like a bad strategy. Certainly following the people on the top can’t hurt, can it?

What these people don’t realize is that everyone else is also trying to mimic the leaders. When everyone follows the same strategy, the opportunity becomes overloaded. As a result, following the experts can actually be dangerous.

An example of this (and I’ll probably get flamed for this) is guest posting in blogging. This was a fantastic strategy a year ago when blogs like ZenHabits used it to build popularity. Seeing how it worked for Leo, now I see a flood of guest posting. The problem isn’t with guest posting, the problem is that it is currently too overcrowded to be a great opportunity.

What can you do instead? The answer is to experiment. By all means, try following the experts. You might stumble on some hidden technique they use that is relatively unknown. But be sure to test it. If you can’t justify with numbers that it actually works, ignore the crowd and try something different.

Being able to figure out which field you’re in is crucial. If you are in an effort field, working harder will likely have a big payoff. If you are in an opportunity field, you need to stop yourself and try one of the strategies above. If effort doesn’t matter, don’t drive yourself to exhaustion playing a game you won’t win.