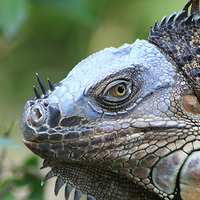 “I wrote for twelve years and collected 250 rejection slips before getting any fiction published, so I guess outside reinforcement isn’t all that important to me.”  – Lisa Alther

“Talent is helpful in writing, but guts are absolutely essential.” – Jessamyn West

“Oh, great reviews are the worst. They mislead you more than the bad ones, because they only fuel your ego. Then you only want another one, like potato chips or something, and the best thing you get is fat and bloated. I’d rather just refuse, thanks.” – Chazz Palminteri

I think it’s crucial in life to have a thick skin.  Doing just about anything important means you need to shovel through a lot of garbage, criticism and abuse.  You can’t disregard negative feedback and live in your own fairytale world, but at the same time, you can’t let the comments of other people derail you from your goals.

That’s the hard part about having a thick skin.  If it just meant ignoring negative comments, having a thick skin would just be a matter of training.  But it’s not.  You need the critics, because criticism can help you make improvements.

A thick skin is difficult because you need to manage both.  You need to be able to absorb and act on sometimes unfair criticism, while staying motivated.  The people with the thickest skins aren’t insensitive jerks.  These are the people who are able to take downright abusive comments, pick apart the pieces to make themselves better, and still be able to wake up with energy in the morning.

Why Have a Thick Skin?

I’ve heard a few comments on the forums defending over-sensitivity.  If you feel you’re oversensitive, that’s nothing to be ashamed of.  Many people are, and many people who handle criticism poorly have still done great things.  However, the thicker you can make your skin, the more you can persist when times are tough.

Occasionally, when I’ve started a goal, I’ve kept much of the progress to myself.  While some of this is for modesty, part of it is also to reduce criticism.  I’d rather avoid the attacks of other people that threaten my motivation.

This is a pretty common strategy for setting goals, and a fairly successful one.  Tim Ferriss mentioned to his assistants that he only wanted to hear the positive reviews of his book, The 4-Hour Workweek.  He didn’t have the time to spend worrying about the negative ones.

I think many people can relate to this process, but it has a hidden downside.  The more you try to shield yourself from negative information, the more distorted your reality becomes.  Ideally, if your skin’s thick enough, you should be like Palminteri, embracing the negative reviews because they keep you real.

Having a thicker skin means you can get the best picture of the world, even when the messenger of that truth conceals it in an insult, ad hominem attack or abuse.

How to Develop a Thicker Skin

I don’t have the world’s thickest skin, but I’ve gotten a lot better.  Although I love interacting with readers on this website, an open comment box and email form is practically an invitation for all sorts of anonymous abuse.  I’ve been lucky that the good comments greatly outweigh the bad.

I feel the best way to get a thicker skin is to learn to separate the feedback.  Filter it so you know how to handle it.  If you handle insults the same way you handle genuine criticism, it’s easy to get depressed.  However, if you disregard every piece of feedback that doesn’t come with a smile, you’re missing out on a lot of growth opportunities.

With all of these, having a thicker skin means comparing your self-reflection to your own goals.  If making a change would completely derail you, sometimes it’s best to ignore the feedback.  I run this website as a business, as it’s something I love and I want it to support me full-time.  This sometimes angers a few people who believe I should put in thousands of hours of work completely for free.  Their criticism may be valid, but because it runs counter to my own goals of financial independence, I have to ignore it.

Once you sort through information, you need to handle it emotionally.  It’s not easy to be told “no”, insulted or ignored.  I’d be lying if I could say I’ve never had a bad day because of a few pieces of pricklier feedback.

The only way to develop thicker skin emotionally is to have some scar tissue.  The body has an amazing healing mechanism.  When you break a bone, the refusing of bone tissue makes the point of breakage stronger than it had been before.  The best way to absorb and handle criticism is to face a lot of it.

I’m involved in a class which competes on business plans internationally.  My professor suggested, as motivation, to watch the Alec Baldwin speech from the movie Glengarry Glen Ross.  If you’ve ever seen the movie, the speech is (to most people) just about the least motivating speech I’ve ever heard.  Baldwin uses just about every expletive and verbally abuses the salesmen he’s come to talk to.

Note: You can watch the clip here, no promises that it won’t be removed later.  Plus it has some colorful language, so it’s not work safe.

The reason the movie was suggested is that many of the judges for the competitions can be almost as harsh.  If you can get used to the nastier comments and abuse, you can see them for what they are.  An extremely vicious attack can be deflected so only the information remains.

Be Driven By Your Vision, Not Other People’s Criticism

Developing some scar tissue is only half the battle.  If you spend all day insulting someone, they don’t become tougher, they probably just become depressed.  That’s why I think it’s important to focus on your goals constantly and your vision of how you want your life to be.  If you can make the picture of what you want perfectly clear and desirable, then you can take a lot more abuse before you get there.

Whenever I face a lot of criticism, I go back to my goals and what I want (both personally, and in contribution to the world).  Criticism has the potential to derail you, to make you focus on pleasing everyone instead of staying committed to your vision.  This is why goal-setting is so important.  If you don’t have goals that are so clear and real in your mind, then they will be outspoken by the next jerk who doesn’t like your ideas.

One of the best books for reading about this (and facing criticism) is The Fountainhead.  The main character of the book has a very clear vision of what architecture is supposed to be, and the buildings he is going to design.  He understands this vision so clearly, he is willing to persist through all the people that want to destroy him.  If you don’t know what you want, then it’s very easy for people to seduce and threaten you off track.

The Hardest Criticism to Take Usually Has Some Truth

Completely baseless criticism doesn’t usually offend anyone.  Telling a tall guy he’s short, is usually a joke not an insult.  The criticism is baseless, so it’s not hard to ignore.

It’s the stuff that has a partial truth that we find hardest to take.  These are the parts of our life we have either rationalized away, or haven’t been able to accept.  In these cases, criticism can be helpful.  However painful, it strips away the defenses and gives us a chance to fix a problem.

If someone called you fat, and you were morbidly obese, that might hit a nerve.  But it also gives you an opportunity.  You could take the insult as a push to make personal change and lose weight.  Or you can take your reaction to the insult as a need to accept yourself and your weaknesses completely.

Which path you take depends on your ability to change, and also whether the weakness detracts from your goals.  Working a career you hate, just so your rich friends won’t criticize you is a lost cause.  I’d rather accept a lower financial status than sell out on my goals.

In the end, I think having a tough skin means you’re more independent.  When you don’t rely on the constant approval of other people, you’re free to pursue what you really want.  Being able to process criticism without feeling personally attacked can be difficult, but it means you aren’t restricted to the safe, simple goals which have no risk, never upset and inspire no one.