Many people fail to change their habits because they focus limitations, not the opportunities that arise from those limitations. Restrictions can actually create more variety in your life.

The Paradox of Choice

The reason restrictions often add new variety is in the paradox of choice. The paradox is that, given more choices, people often make worse decisions. Cognition is a limited resource, so faced with infinite choices, people fall into the same old habits.

Keep track of the amount of different meals you eat in a month. You’ll probably be surprised to find that, even with a near infinite array of choices, you stick to the same dozen meals. Before you start any new diet, remember that you’re already restricting yourself from 99% of the meals on the planet because of a lack of imagination. 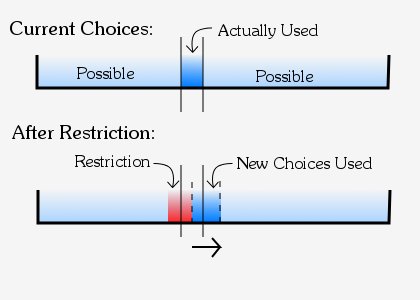 I’m a vegetarian. I have been for over three years. The first comment I usually hear when I inform people of this is that, “I enjoy eating meat too much, I could never give it up.”

About half of the foods I cook today, I had never tried before becoming a vegetarian. In all probability, I wouldn’t have tried them if it weren’t for that decision. Becoming a vegetarian didn’t limit the variety in my foods, it simply shifted my diet to a different set of meals.

My point isn’t that everyone should become a vegetarian. Rather, don’t focus only on the limitations of a new eating pattern. Instead, use those restrictions as an opportunity to add more variety.

I first discovered Toastmasters when I was on a self-imposed restriction to avoid television. By avoiding one use of time, my opportunities expanded to allow me to enjoy completely new hobbies.

I had a similar experience when restricting my computer usage. Suddenly I was reading more books because I broke my old habits.

Restrictions aren’t a limitation of your choices, but a shift in those choices. Now, instead of examining one set of activities or behaviors, you have a completely new set. Creative leaps come from constraints.

Getting Out of Your Default

When I discuss giving up meat, waking up early or eliminating television some people get wide-eyed with fear and disgust. It’s as if I told them I spend several hours a day with a flail mutilating myself out of piety.

What’s harder to explain is that most of my efforts towards restriction are for the exact opposite goal. Utilizing restrictions to get myself to do more interesting things. Giving up internet usage isn’t to limit my life, but the opposite, to enjoy it more. By restricting one set of choices, I can get out of my default behaviors and make more interesting choices.

There is this myth that people are perfectly rational, and that they will always pick the utility maximizing choice, when they have the option. That’s garbage. People are irrational, and that includes me. Given the choice, people do what they did yesterday, not what’s best.

Adding new limitations to your routine does take some effort to adjust to. People are habitual creatures, so it takes more brainpower to divert your resources. Like changing the direction of a river, it can take some effort to break out of your current path.

I’ve already written extensively about how to change habits, but the advice is rather simple. Focus on one change per month, and be ruthlessly consistent. If you can do this, after a few weeks, the new behavior should be automatic.

My policy is that no restriction on my life is ever permanent. I’m a vegetarian today. A year from now I may be eating meat. I expect absolutely no permanence in my life on a fundamental level. Everything is simply another iteration as I’m constantly trying to improve.

My goal for restrictions is to make them habits. Once they are habits, then I no longer need to force myself to pursue them. From the standpoint of a habit, I can neutrally evaluate whether they are worthwhile to maintain. Some I keep because I like them, others I discard.

The goal of using restrictions is to expose yourself to a wider variety of experiences. I don’t consider it a failure if I let an old habit slip when the context changes. My purpose was satisfied, and providing I made the decision consciously, it was still successful.

As of this moment, I’m waking up at 7:30 am, and not 5:30, as I had been in the past. Early rising is a great habit, but given my current schedule it isn’t useful. I’ll probably take it up again later, but I don’t consider it a personal failure if I make a switch. If you make every constraint an experiment, you are always in control.

There is always a balance. New restrictions create new opportunities. If you pursue your goals in that light, it isn’t as hard to summon the willpower to make a change. You may realize when you’re done that the restrictions weren’t so difficult, and they gave you the ability to try something new.