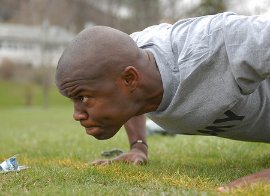 Fitness has stopped being a worthwhile goal, in and of itself, in our society. Frankly, I think that’s a big reason why we’re getting so fat. We’ve made fitness something only worth having if it comes along with six-pack abs and reduced chances of heart disease.

Why Most Struggle with Fitness

Have you ever met someone who was only speaking to you because they wanted something? My guess is that person didn’t become your best friend. Even if they had a lot to offer, approaching you from that perspective is a big turn-off, professionally and socially.

I believe most people approach fitness the same way a desperate guy approaches a hot woman. They start the interaction focusing on what’s in it for them. When they get brushed off with poor results, they give up.

The solution isn’t to try a new technique or trick. It’s to reaffirm something we know to be true, but have been brainwashed by an increasingly vain society to forget it: that fitness is intrinsically valuable.

The Intrinsic Value of Fitness

I lied in my opening paragraph–sort of. I do care about my appearance, energy levels and health. It’s just that those things are side effects for me. They’re great side effects, that’s for sure. But that’s all they are. They aren’t my reason for showing up, every day.

I exercise because I love being in shape. Not for any reasons other than that I enjoy pushing the limits of my body and trying to increase my strength, endurance, flexibility and what my body can do. If, after that, I look better in the mirror or reduce my chance of heart disease, great. But it’s not why I show up.

A friend and workout partner once commented to me that I might want to give up aerobic training in order to put on more muscle. And, for a brief time, I may have actually listened to him. Until I realized how stupid his advice was.

I realized I don’t work out to “put on muscle”. Sacrificing my joyous pursuit of all-round fitness by eliminating one category of exercise, just to potentially look a bit better, killed my motivation.

Incentives Can Have an Opposite Effect on Motivation

One surprising truth of modern psychology is that giving external incentives can actually serve to de-motivate people. When you give people a small reward for something they would enjoy willingly, their desire to take on the task goes down. Try paying a volunteer at a homeless shelter $3 per hour, and you’ll understand what I mean.

The reason is that outside incentives choke out the possibility of an intrinsic motivation. When you make health or attractiveness the primary reason for exercising, any intrinsic appeal fitness might have for you takes a back seat. Intrinsic appeal is the best driver, and should be behind the steering wheel.

The Return of Fitness as an End Unto Itself

I can’t give you a logical argument for why fitness should be intrinsically motivating. Any list of the pros and cons would inevitably rely on the extrinsic benefits. So, in trying to argue for intrinsic fitness, I would be undermining the very argument I’m trying to make.

So instead of arguing, I’ll just share my perspective:

I’m not going to win any muscle-building contests, I know many guys who are much bigger and well-sculpted for less effort than myself. I’m horrible at most sports, and I’m not winning any athletic competitions. I’m healthy, but not noticeably more than many of the people I know who exercise less.

However, I can do one-arm push ups, comfortably run 10km and bench press more than my own body weight. Of course, not that bragging about those things is important in the least, either.

Obviously my approach won’t appeal to everyone. But, for those who it does, I want to suggest that fitness be made a higher value than all the other reasons people “should” exercise. That people shouldn’t be using health, energy or getting a beach-bod as the excuses to get in shape. That endless mass-building, weight loss and constant effort to sculpt and shape aren’t worth your time.

The only reason you should drag yourself off the couch to run, bike or go to the gym is simple: because fitness is an end unto itself.