The heritability of IQ increases with age. If this doesn’t surprise you, it should. What it means is that as you have more experiences, they matter even less for your overall intelligence.

One explanation for this bizarre fact is that intelligence has a compounding property. If you’re slightly smarter as a child, due to innate advantages, you’ll enjoy learning more and accelerate your intelligence faster. The smart, it seems, get smarter.

. Called the Matthew Effect, it explains a lot of the divergence in talent in individuals, and suggests that even slight advantages early on can create huge gaps in success, intelligence or skill later on.

The Mathematics of Destiny

It turns out that this tendency, for small advantages to create huge disparities isn’t an uncommon phenomenon. The mathematics of chaos theory show that many systems can be modeled as having these divergent properties. 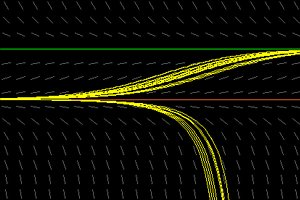 One path increases, another gets very close but never makes it. If the Matthew Effect is correct, those plots could be the trajectories of your life, not just equations on a blackboard.

But what happens if you reject the direction you feel your life is headed? Just because you struggled at school, does that mean there will be concepts forever outside your reach? Einstein was famously called a dullard in elementary school. But Einstein is just one man, and hardly a representative one at that.

My feeling is that there are two types of self-improvement. There’s the natural, accelerative kind. The slightly taller kid gets more attention from his basketball coach and practices even harder. The Matthew Effect in action.

Then there’s the swimming upstream kind. This is where the feedback isn’t wholly positive, and you need to fight against the seemingly mathematical inevitability of your current trajectory. This is the overweight person starting exercise or the awkward kid going to parties to try to meet people.

Some people would argue that making such a distinction is limiting. After all, if you tell yourself it’s an uphill battle, won’t that sap the very motivation to work that you have? Maybe it’s easier to ignore the sociological principles and pretend that our destinies are entirely ours to define.

But there’s an implicit optimism in the upstream swim as well. Because it means that if you can swim far enough to get into a different funnel, success might start to become easier, you might be able to get your own Matthew Effect rolling and forever escape the trajectory of your old destiny.

Swimming Towards the Inflection Point

I had an experience like this when setting up my first online business. I desperately wanted to earn just enough money to live on, and it was very frustrating when I spent years not even able to do that. I was swimming upstream, and the scale of the challenge ahead was daunting to me.

Yet, after five years of work, something strange happened. I went from being unable to pay the bills to having a good income in just the span of a few months. From there, future improvements became even easier, and now I’m financially secure enough to devote myself to a huge project that has zero impact on my bank account.

A truth, properly interpreted, is always more optimistic than a self-delusion. So while the Matthew Effect says growth is hard in the upstream phase, that’s not actually news to anyone. If you’re struggling with your career, finances, relationships, health or studies, you’re acutely aware of how hard self-improvement is.

What the Matthew Effect suggests is that there’s also an inflection point. A point where the positive reinforcement exceeds the negative feedback, and growth takes less effort—the trajectory shifts enough to define a new destiny.

Getting to the Turning Point

Recognizing that, in many systems, success is hardest early on, but it gets easier helps put things in perspective. It also encourages you to use more discipline early on, since getting to the inflection point is the hardest step.

I definitely felt this upstream swim with my social skills when I had graduated from high-school. I had been boring and fairly unpopular, growing up in a tiny town isolated from a lot of opportunities to meet new people.

When I moved away to study in university, I was eager to make up for lost time. But, I also noticed I was much rustier that many of my peers in the art of making friends and socializing. It always took an effort to convince myself to go out, since I wasn’t the life of the party.

I kept working at it, and somewhere in university I started hitting an inflection point. I became good enough at meeting new people, that I didn’t have to force myself to do it. I recently moved to a new city with no friends and I’ve met hundreds of people in the following months.

With my business and with my social skills, I had plenty of moments of frustration early on. Especially when success is not forthcoming, it is easy to believe that maybe you aren’t cut out to succeed.

Were I able to go back, I would have told myself to expect that, and just because the rate of progress is slow initially, doesn’t mean it won’t accelerate later. Work hard, show up every day, and sometimes you can swim upstream far enough to change your destiny.

Side Note: This happens to be the 900th article for ScottHYoung.com. Although it’s been a lot of work, I too owe a lot to the randomness of early fluctuations and from the generosity of readers here. Thanks to you for reading, and for making it possible for me to do what I love every day!