Trying too hard is stigmatized in our society. People don’t like it when someone goes too far when trying to accomplish something. This is unfortunate, because going too far is exactly what you need to do.

Case in point: I recently started tracking calories. No, I’m not fat. No, I don’t think I am. But as a formerly always-skinny guy who no longer can eat anything and never gain weight, I decided to be proactive about it. I wanted to know more about how much I eat and how much effort I need to exert to lose or maintain my weight.

Of course, everyone I’ve talked to who has seen me doing this thinks I’m crazy. “Why are you trying to lose weight?” “You should just try to eat ‘healthy’,” “Isn’t tracking everything you eat super annoying?”

To which the responses are: “To see how much effort it is to lose a few pounds,” “I do try to eat healthy, but I want more precision,” and “Yes, of course it’s super annoying.”

Then why do it? My answer is simple: going too extreme in the beginning of a new self-improvement task is a necessary part of calibration. The same people who skip this and aim for the “moderate” solution, perpetually fall short.

To achieve results in any goal, there’s an optimal effort range. Too little effort, and you’ll fail to see traction. Sometimes, if there’s some friction between where you are now and your goal, you may not make any progress at all. Even if that isn’t the case, the progress might be so slow as to be uninspiring or unacceptable.

Unfortunately, you don’t actually know where this effort range lies. It could be quite simple, and only a modest effort on your part will achieve the desired result. Or it could be so challenging as to be impossible for you, or completely impractical based on your other goals. 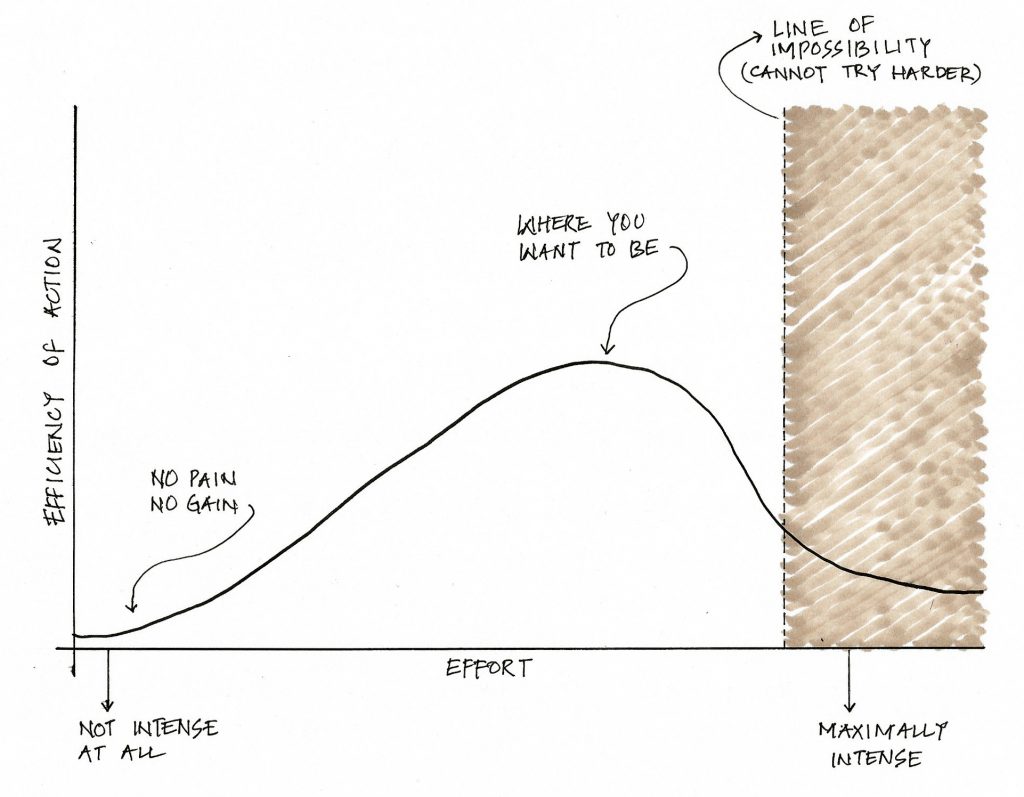 The first part of any self-improvement effort in a new domain is to figure out where that effort range lies. This isn’t something anyone can tell you, because it differs from person to person.

What’s the best way to find that ideal effort range?

One approach would be escalating moderation. Keep pushing harder and harder until you get results. Unfortunately this typically fails for two reasons: one motivational the other practical.

Assume that the ideal effort range isn’t easily within reach. Which, let’s face it, is the most likely case because if the effort threshold were really low, you probably would have surmounted it with casual interest by now.

Now assume that you try to steadily ratchet up your effort and intensity until you reach the level that sustains improvement. 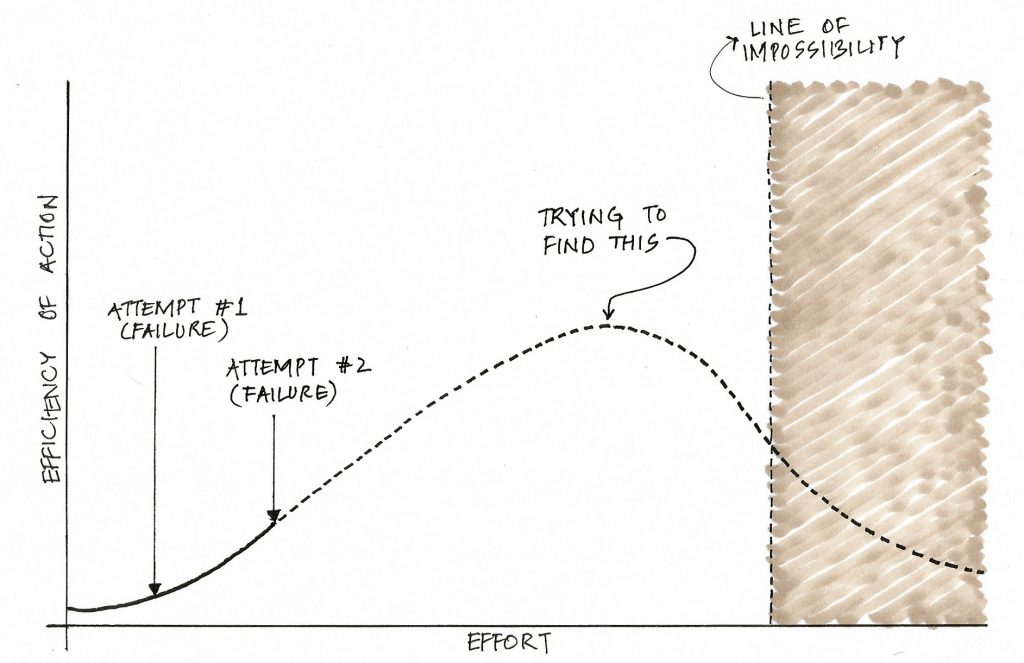 The problem is that, if the effort threshold is high, you’ll probably fail on the first few increments of moderation. That is, you aren’t trying hard enough to make the kind of results you feel are meaningful. The consequence of this is that each reassessment is brought on by failure.

Perhaps if we were all emotionless Vulcans, this wouldn’t be an issue. Except failing constantly is a good way to undermine your confidence and motivation for self-improvement. It’s hard to wholeheartedly throw yourself into something you feel won’t be successful.

Compare that with starting out more extreme. Now you’re much more likely to have the effort threshold within your starting project. Here you can do the opposite, tone down your efforts based on a history of overwhelming success. This, in contrast to pushing through failures, is much easier to do. 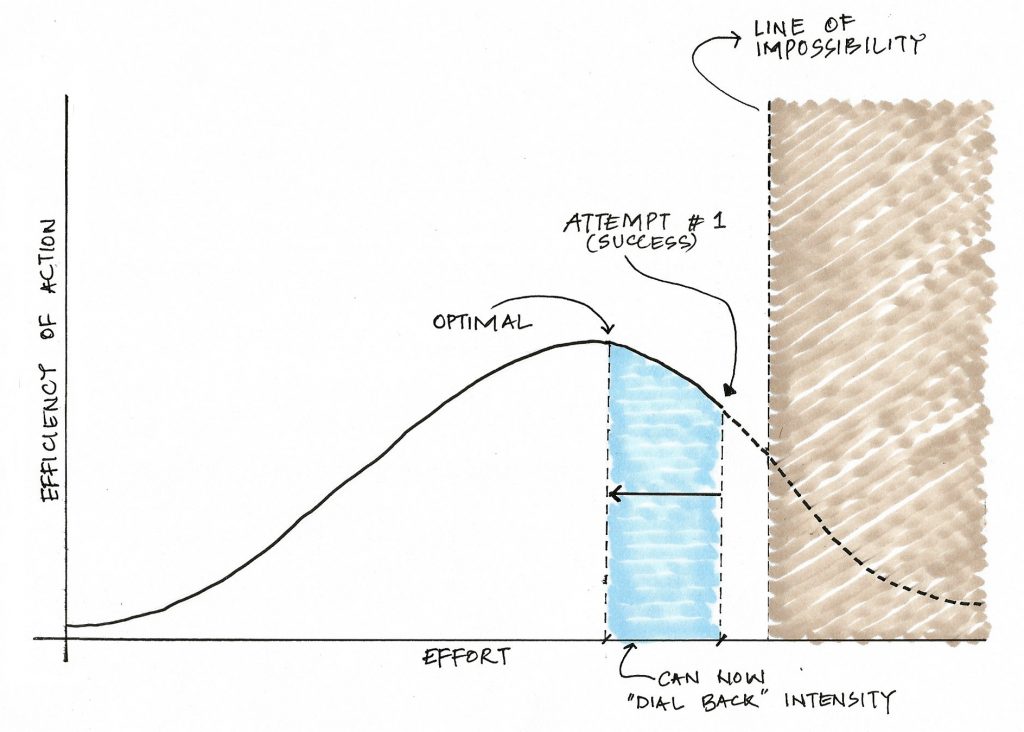 Why Moderation Fails: Reason #2 – Effort is Easiest in the Beginning

The second reason why this ratcheting approach isn’t often successful is because it’s easiest to apply a full force of effort in the beginning of a new goal or project.

There seem to be a few different reasons for this. The first comes from a selection effect. You naturally have different levels of enthusiasm for different goals percolating in your head at all times. When you finally trigger the forward action on one of those goals is when that goal has risen above the rest. Therefore, it’s at an unnatural high-point which, because of regression to the mean, will likely not last forever. Escalating moderation requires the opposite—that you put more effort in, long after a project has started.

The second is probably because of construal-level theory. When you think about a goal in the abstract, you aren’t seeing all the details. You imagine the broad swaths of positives, but often forget all the gritty negatives. Imagining being fit or fluent is romantic. Actually waking up and hitting the track or grinding through vocabulary acquisition is not.

All of this means that if you’re going to be applying maximal force, it had better come earlier in your efforts.

Limits to the Strategy

The two biggest critiques I can see to going extreme-first would be preventing burnout and building habits.

The first worry is that by going extreme-first, you risk burning yourself out and crashing, abandoning the project. My personal experience is that you can typically dial back the intensity when you see this happening. As long as you’re putting in sufficient effort to get results, this is often a more satisfying approach than pushing through failures caused by insufficient effort. My MIT Challenge worked this way, where I started out much harder than I actually needed and was able to dial it back later.

The second concern is that habits are best built with the slow-and-steady approach. Here my thoughts are more nuanced. Both strategies are good, but they serve different purposes and so you need to decide which is more useful to you in each situation. Habits are good at building long-term, autopilot behaviors. Extreme-first effort approaches are good for calibrating what level of intensity is needed to deliver results. Depending on the situation one may take precedence over the other.

Why is Trying Too Hard Stigmatized?

All of this raises an interesting question: why is trying hard looked down upon?

I have a couple theories, none of which are mutually exclusive:

People often have a competitive streak. When they see someone doing better for themselves, they feel worse about their own situation. As such, they want to discourage what they see as an attack on their own identity.
This is probably true in some cases, and it’s the most cited explanation by new try-hard achievers, but it’s probably false in most of them. My own experience is that the usual reaction is scorn or pity, not envy.

In other words, people explicitly or implicitly reject the arguments I set forth above for why going overboard in the beginning might be an effective strategy. These people may genuinely feel like a more moderate approach would be more successful, and so they dislike the extreme lengths the person is undergoing.

I see some support for this idea. Particularly in areas where people often fail to have maintenance of their achievements afterwards. In both weight-loss and learning, there is often an intense period of accomplishment which can be undermined if long-term efforts aren’t made.

But if this is the case, then why attack the extreme initial measures instead of the lack of proper long-term follow-through?

The final theory I can think of isn’t envious of accomplishments or agnostic about the benefits, but feels dislike at the possibly rising standards of effort expected. What is considered a “normal” amount of effort is defined relatively. If everyone tries harder, then that becomes the new normal.

It’s certainly possible to get into an arms-race of ever escalating effort, especially when part of the goal is to signal to other people how much effort you’re putting into something. The net effect of this may be, that in order to not look lazy, you need to put in tons of effort.

Two examples where I’ve seen effort-expectation positive feedback cycles run out of control are modern parenting and working hours expectations in East Asia. It’s certainly a risk and so, perhaps, people are using collective norms to try to prevent these feedback loops from occurring.

All of this, of course has a simple solution. If you don’t like the stigma, you don’t need to talk about your extreme efforts. Work hard in private, and if anyone asks, you can downplay how hard you had to work at it.

Side note: This is already common, and it explains why many people’s first attempts are pegged far to the left on the efficiency-effort curve of where they should be. They think by seeing other’s blasé reaction to their own accomplishments that success is easy. It’s not, people just don’t want to be punished socially for appearing to try hard.

How Much Effort is Necessary?

Often the ideal efficiency of effort invested is much higher than people realize. I’m not alone in thinking that, for language learning, this occurs at near total-immersion. For many other projects it may not be maximally intense, but it still occurs near the upper range of your capabilities.

All of this means that going extreme doesn’t deserve the negative connotations it often receives. Starting strong and dialing back the intensity, in the case that a lesser effort will do the job just fine, is a much better overall strategy than trying to progressively push yourself harder when the previous investment failed.

What are your thoughts? Agree or disagree, share them in the comments below!