Most people think of procrastination as always a bad thing. You procrastinate on doing your work. You wait until the night before the exam to study. You put off paying bills, doing chores or going to the dentist.

But procrastination can also be a very useful behavior, if you procrastinate on the right things.

In this context, I’ll define procrastination as delaying something vaguely. In this sense, it means putting something off until later, even if you think you eventually need to do it, without any concrete plan for when that might be.

How to Procrastinate For Good

My best frugality tip is simply that when you want to buy something over a certain price range (say $100), procrastinate on it. Only buy something if you’ve already been putting it off for too long.

This fits the description of procrastination because many of the things you want to buy, you think you need at the time. You might as well buy that new jacket, because your current one is torn a bit and you’ll need a new one anyways. You might as well pay for that renovation, because you’re going to do it anyways.

This type of procrastination works for two reasons. First, you end up delaying purchases. If all your purchases get spread out in time, that lowers your expenses, even if you plan to buy the same things in the long-run. Second, many of the purchases you procrastinate on, you change your mind about needing, later. 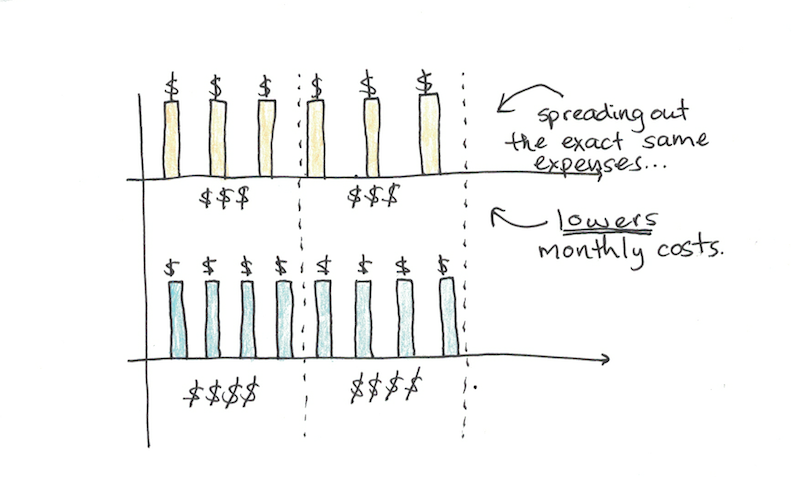 If you’re like me, you probably have a million things you need to do in your work, and not enough time to do them all.

The solution is to procrastinate more on the ones that aren’t so important. One of our staff members who was managing our Facebook page left our team, and it fell on me to replace her in that task. I know I need to do it (or probably should get someone else to do it), but instead I’m procrastinating on taking any action there.

While this may seem irresponsible, it’s ultimately helpful. Our Facebook page was new, small and had little impact on our business. By procrastinating on that, I’m writing this article now, which has greater importance.

However it doesn’t usually feel this way. When I delay buying new shoes, even though mine are getting a bit worn out, I often feel bad. I know I need to buy new ones, so procrastinating feels like I’m wasting time, even if I’m actually helping my bank account.

Similarly, I do have nagging guilt about not updating our Facebook page as often. I should go back and handle that task, but instead I’ve been putting it off.

My point is that while, objectively, helpful procrastination and prioritization can be two sides of the same coin, emotionally we tend to focus on one half or the other, not seeing their logical equivalence. We associate procrastination with guilt, when the thing we’re focusing on is the thing we believe we need to do, but we’re not doing.

I hope that by highlighting procrastination as a helpful tool, you can ease that guilt and allow yourself to take advantage of the benefits that putting off things can create.

Ask yourself right now, what are some ways you could use your tendency to procrastinate for good? Delaying activities that, while necessary eventually, would be better off done a little later? Share your thoughts in the comments.