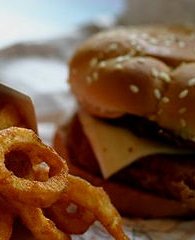 Sweet, greasy and delicious, empty calories are filler food that keep you feeling full while offering little nutritional value. In the short term, these empty calories are great. They let you feel good and are easy to swallow. But their glory is short lived when they leave you with disease and obesity.

Our bodies were designed before McDonalds. Designed tens of thousands of years before agriculture and mass production, the human body is easily tricked by a french fry. It has fats and carbohydrates galore, satiating hunger without mentioning that it has very little else. Tastes good now, but can you stomach the results?

The problem with empty calories is we have a broken counter. Our body counts the empty calories the same as the nutritious ones. Donut or broccoli, the counting works the same.

Broken counters happen in all areas of life. Some people count anything they do at the job as work. Their counter goes up whether they sit around and push papers or finish their project. Some people count reading about public speaking with the same weight as getting in front of an audience.

The counters aren’t broken so much as they are too simplistic. Nutrition, productivity, and growth are such fuzzy concepts that they are too difficult to really measure. So, we count other things instead. Time spent on the job, widgets produced and books read. The counter is easy to use, but it lets the empty calories slip by.

When work slides, instead of cutting down on empty calories, people just try to consume more. Spend more time at the office, more time working on your goals. Work harder and harder. More calories, less value and eventually burnout.

The way to be healthier is not to eat more calories to make up for the empty ones but to eat better foods. Effectiveness at anything doesn’t just mean doing it more, but doing it better. Cutting the calories that really don’t matter.

The most dangerous empty calories aren’t the soft drinks and burgers that you willingly consume, they are the ones that trick you into believing they are healthy. They are the breakfast muffins and processed granola bars that look healthy but are mostly empty. You don’t even feel guilty eating them.

Take a look at everything you are doing towards your goals. Don’t guess about what is making a difference and figure out what actually is. A successful article on this blog can gather in thousands of new readers. An average one is lucky to garner a single comment.

It took me a lot of time before I realized that volume is good, but quality is crucial. This isn’t just common sense. Other blogs live and die by the volume of their content. I actually had to pour through the numbers on mine to realize that this wasn’t true for me. Volume could keep me where I was but only very high quality could take me where I needed to go. This meant shifting time from writing to more time developing ideas.

The empty calories that are going to kill you won’t come with a nutritional information box. These calories are often hidden and wasting your time. The only way you can uncover them is not to guess but to actually look. Pull up the results, run an experiment, test your idea.

Most people already eat the amount of calories they need. Nutrition isn’t eating more it is eating healthier. Productivity doesn’t mean working more, it means working smarter. It is a strategy of cutting those empty calories and trading them for the work that really matters. Sometimes it might surprise you.