Read your books, study the material and practice, practice, practice. That’s the way to learn, right? I think that viewpoint is a bit too simplistic. In reality, the people you surround yourself with can be a catalyst for learning. I believe this is true even if they never give you a lesson or memorable piece of advice.

The academic theory of learning goes a little like this: 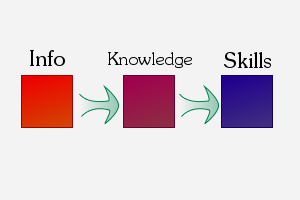 You seek out information, either directly from books and training or indirectly through experience. That information becomes knowledge, which then become skills.

Instead of this view, I’d like to state that learning (not just getting A’s but having useful skills) doesn’t occur in a straight line. Skills are developed partly unconsciously as you soak up the beliefs, attitudes and perceptions of your environment. 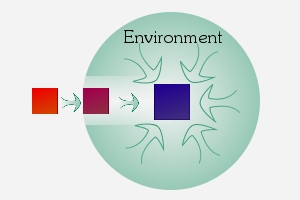 Catalysts can accelerate a reaction between two compounds. An intelligence catalyst is an environment that speeds up your ability to learn. This form of learning isn’t often academic, pick A-B-C-or-D-type learning. But if you need useful skills, creating a catalyst is a must.

Although all the elements of your environment influence your self-education, people are the most important factor. By building relationships with people who have skills, the beliefs, attitudes and perceptions they have will rub off on you. This learning by osmosis is difficult to quantify, but when you look over a period of years the person with the best network tends to have more expertise.

I somewhat dislike the term “networking.” It makes the social process seem cold and transactional. “Making friends” would probably be a much better term to describe how networking should be done.

Unfortunately, it is easy to view networking as being only for direct benefits. “It’s not what you know, but who you know,” illustrates this point. But I’ve found that the tangible benefits of networking is fairly limited, especially when you consider the intellectual cost of investing time and energy into building relationships.

Instead, I like to see networking as building my intelligence catalyst. The invisible surface that accelerates my skills. By building bonds with people I can leech off some of that intangible essence that makes them good at what they do.

An added benefit of this desire to build an intelligence catalyst, is that it makes networking easier. Instead of a quick handshake and business card exchange, you actually get interested in the person you are meeting. Learning about them is your goal, not just an in-between step for a big client or job offer.

When you start networking for brains, the other benefit is that you’ll meet people you’d otherwise ignore. One downside of an intelligence catalyst is that if you surround yourself with people only in your field, you miss external perspectives. It often takes an outsider to destroy established thinking because everyone was following the herd.

Goalless action is crucial for brain networking. There’s a principle in philosophy which states that if you expect what you are going to learn, you already know it. In other words, you can’t tell the value of information without actually viewing the information. Meeting people from all areas can provide value in ways you might never have expected.

I don’t claim to be the worlds best networker. But I do strive to be the best listener. The best at finding someone and being receptive for how they can become an intelligence catalyst. I’ve made hundreds of friends online, through the phone or in person. And with each, I strive to absorb as much as I can.

Here are some tips:

My challenge to you today is to pick one person vaguely associated in your network. This could be someone you’ve had a few e-mails with, conversed with or is a friend of a friend. Someone you don’t know much about. Ask them to meet-up or chat on the phone and try to just listen as much as you can about them. Who knows, you might just learn something.