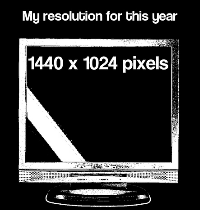 New Years Resolutions show the right intentions. Trying to make improvements, often through changing a behavior, habit or goal is a good start. No matter how cynical you may be about the prospect of writing down your promise for the next year, it does show a desire for change.

Pretty much everything else. Good intentions aren’t enough to hold together a change, otherwise everyone would be fit, rich and happy. Motivation is a good start, but with a broken strategy, you’ve lost before you begin.

Here would be my top ten reasons not to set a New Years Resolution, or at least avoid the pitfalls you can encounter in doing so:

1. Most Improvements are Gradual

Computers didn’t shrink from room-sized behemoths to portable laptops after one round of research and development. Trying to make everything perfect is usually a lost cause. I’ve found that slowly building on past developments to be a more reliable strategy.

Have you ever seen small children who ask for too much food and then fail to eat it all? The same thing happens with adults, and it is easy to forget. When I decided to start changing my habits, I worked on them one at a time, each for at least a month. This focus is difficult when you are filled with ideas, but forcing yourself to slow down ensures the change lasts.

If birthdays and calendar changes are the only time you reflect on your situation, what are you doing the other 11 months of the year? Making improvements needs to be a constant activity, not something that goes with the seasons. I prefer taking weekly reviews so you can continuously make small adjustments, rather than huge direction changes once a year.

3. Too Much Emphasis on Willpower

What is the biggest factor that prevents you from succeeding in your resolution? Willpower seems to be a common theme, because it is what most people blame if they fail. “I don’t have enough willpower to quit smoking/keep exercising/stay organized,” is a common plea.

I disagree. I believe the biggest obstacle is knowledge, not discipline. Changing habits, staying organized or becoming healthy are all skills. If you couldn’t hit a home run your first time playing baseball, you wouldn’t blame your willpower. It doesn’t make sense to blame your willpower if you strike out on a resolution.

4. Too Little Emphasis on Experimentation

Resolutions play into the mindset of success and failure. As a result, there is too much emphasis on not making mistakes and too little emphasis on experimenting. When you experiment, every result is just another piece of data to draw ideas from.

Instead of a yearly resolution, how about a monthly experiment? Set a new goal and commit only to trying it for a month. Eliminate your expectations about what should happen and just observe the results. I’m always trying to run new personal experiments, and the vast majority don’t give me the results I want. But the small percentage that do give positive results can make up for dozens of tests that fizzle out.

5. Failing to Build on Past Experiences

It’s easy to see why so many people have completely given up on New Years Resolutions out of cynicism. If your fourth year in a row attempting to change a habit failed, why have high expectations for the fifth? It’s only human nature to get discouraged after failing. Unfortunately, it’s also human nature to completely ignore the reasons the first attempts failed.

A few years ago I started the habit of exercising 5-7 times a week. As a fairly unathletic kid, I didn’t exactly have years of sports training disciplining me to stay in shape. It took me four times before I build an exercise habit permanently. For me, the key to reaching that point was to debug each of my previous attempts and correct the reasons I failed the first time before trying again.

Things like not enjoying exercise, not consistently forming a habit and placing it at a bad time of day are flaws that need fixing before you make another attempt. Failing once for a reason means learning, failing three times for the same reason means stupidity.

6. Getting Hooked on the Goal, Not the Process

Goals are great, but if you hate doing the follow-up steps to achieving a goal, reaching it is going to be incredibly painful. I know many athletes have to pull themselves to a practice when they don’t feel like it. But I don’t know any gold-medal winners who don’t enjoy playing most of the time.

Resolutions often fail because it is easy to get caught up in the goal and ignore the process that leads up to it. I’ve done this myself, where I have worked hard to reach a goal I didn’t want to pursue anymore. If I did manage to reach the goal eventually, I was usually left feeling empty and burnt out.

7. There are Much Better Strategies!

Probably my biggest dislike of New Years Resolutions comes from the fact that there are much better ways of going about goal setting and changing habits. There are enough good ways that it makes me want to discredit the yearly resolution model entirely. Start small, even while thinking big, and rely on experimentation over willpower.