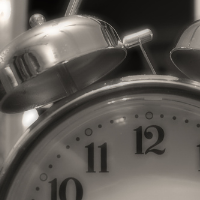 One of the worst things you can do is paying yourself by the hour. Hourly wages make the accounting easier for a payroll department. But that doesn’t mean it’s a good strategy when you’re working on your own time. Unfortunately, I frequently see students, entrepreneurs and self-employed people counting hours worked instead of work accomplished.

My question is this: if he was working 12 hour days, how did he have time to make forum posts and answer emails so quickly?

Pay Yourself for Results, Not Hours

My friend was caught in the trap of counting hours worked, not results accomplished. He was working 12 hour days, but how much of that was useful work? As a software developer, getting his first product to market should have been priority #1. Not forum postings and emails.

If this guy worked in an office, they would probably give him a raise. He’s a go-getter, working 12 hour days while his “lazy” coworkers only come in from 9-5. If he was paid by the hour, he would be earning more than the person who only works eight hours each day.

But as an entrepreneur, he wasn’t being paid for work. He wasn’t being paid at all. He only earned an income if people eventually bought his product. Which meant that the hourly wage mentality was having him work twice as much with no visible results.

I’m being a bit hard on this friend, but only to use his comment as an example. He was talented, smart and driven. But by falling into the wrong mindset, he was working a lot of hours without doing a lot of work.

Internet entrepreneurs aren’t the only people that fall into the trap of paying themselves by the hour. Students often make the same mistake.

I’ve frequently heard horror stories from friends who complain about the hours spent studying for a big exam. However, many of these people are studying with the television in the background, friends sitting around them or instant messaging applications running. How can you consider that studying?

Even if some people get rid of the distractions, there isn’t a studying plan. They simply read and re-read their textbook and notes. No brainstorming for ways to lock in the information instead of just pounding it into their skull. They are too busy “studying” to stop and ask themselves if there is a better way to remember the information sitting in front of them.

Studying is hard to measure. It’s an open loop and it isn’t easy to know when you’re finished. Because of this ambiguity, many students slide into the habit of counting hours. Instead of counting hours, I suggest forming a list of tasks that will help you learn the information. Reward yourself for finishing tasks on that list, not for spending another hour locked in your room.

Switching to a Results Mindset

I believe there are two keys to breaking out of the hourly wage mindset:

Paying by the hour is so prolific, that unless you follow those two ideas, you’re probably infected.

More work is not a good thing. Productivity is the art of eliminating work while having the same amount accomplished. All else being equal, a 3-hour workday is better than working 8 hours. The 3-hour workday yields an extra five hours of free time.

You can boost your productivity by assigning set working hours. Not hours to work, but hours you can’t work. Set up your workday from 9-4 with the principle that you aren’t allowed to work before or after those times. If you finish early, you can leave early. But you can never stay late.

Setting up a constricted schedule flips the attitude. Instead of seeing more work as being more valuable, it’s seen as a higher cost. Every extra hour worked is another hour gone from your day. Forcing all the meaningful activity into a smaller slot keeps you focused on actually working.

Measure Projects and Tasks, Not Time

Most jobs emphasize time over tasks. They expect you to show up to work from 9-5. Only once you’ve fulfilled that requirement do they ask you to finish a certain to-do list. If your to-do list goes unfinished, that’s disappointing, but understandable. But leaving an hour early or showing up late are reasons to be fired for.

If you’re paying yourself, you need to switch the emphasis. Tasks should come before time worked. In fact, if you’re tasks are being accomplished, time worked shouldn’t even matter.

Keep a daily list of tasks instead of an endless to-do list. Daily to-do’s force you to put tasks first. When your to-do list is endless, it doesn’t matter what is accomplished today and what is put off for tomorrow. When your tasks are linked to today, there is pressure to complete them now.

Don’t just measure tasks (which can be a trap in itself), measure projects. Look at the progress every day is making towards projects and use that as a guide for deciding when to stop for the day. Paying yourself by the hour inevitably means you get paid a lot less than you’re worth.