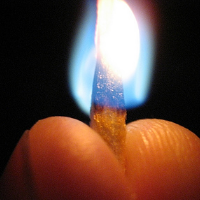 I have a habit of self-destruction.  Every several months, I burn myself out.  I let too many projects overlap for a week or two, and the result is usually lost sleep and high stress.  The surprising thing is, I do this intentionally.

When Do You Burn Out?

The line I’m talking about here is your burnout threshold.  The hypothetical mark on your to-do list that separates high-productivity from complete meltdown.  If you don’t know where this mark is, you’re severely handicapped when planning for projects and for keeping normal stress levels to a minimum.

Unfortunately, the burnout threshold is difficult to guess at.  Some people grossly overestimate how much they can handle.  They set up goals that assume perfect productivity for 16 hour work days non-stop to finish their projects.  Other people underestimate this threshold, and end up wasting capacity that could have brought them closer to their goals.

I advocate a similar philosophy for productivity.  Having a controlled burnout in many ways can prevent out-of-control burnouts later.  By knowing where your burnout threshold is, you can take steps to smooth out projects so there won’t be debilitating workload crunches later.

A controlled burnout means overlapping your projects, but only for a short time.  This way, if you can’t handle it, the period where you’re under high pressure is only for a week or two.  If you can potentially see it coming, you can avoid the uncontrolled burnouts where the overlap lasts months or years, and you’re forced to abandon projects entirely just to survive.

For me, this usually means that I plan ahead so that I have an overlap for 1-2 extremely busy weeks.  I make sure that the timeframe isn’t longer than this, in case I can’t handle it.  But at the same time, I don’t avoid all overlaps because then I’ll lose valuable information about my productivity limits.

Project overlaps aren’t the only way you can test your limits.  Setting short, but incredibly difficult goals, also checks where the line is drawn.  Setting a very difficult 30 Day Trial, might not result in a new habit, but it tests to see what your limits are.  Without knowing the limits, you’re forced to chronically undershoot them.

Burning out frequently is a sign you’re not planning your resources correctly.  Productivity doesn’t mean you need to live in constant red-alert, working 16-hour days.  But at the same time, always avoiding a burnout means you never know your upper limits.

If you don’t know your upper limits, then it is much harder to set any new goals.  You might be extremely driven to accomplish them, but you won’t know how far you can push forward.  You won’t have had the experiences of crossing the line, so you won’t aim anywhere near your real capacity.

Even if you don’t want to go on kamikaze work missions, you can have the right attitude.  The best attitude isn’t believing chronic high-stress is desirable.  But, it also isn’t one that refrains from ever approaching that upper limit.  I think you need to be willing to occasionally cross the line, even if you want to stay on one side of it.