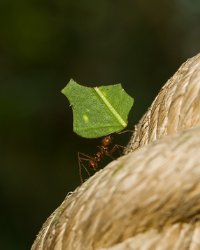 Becoming good at anything takes hard work. A lot of it. The people who are willing to sweat out their craft for years will win. The people who want quick money and fame after six months will not.

However, while success may require a lot of hard work, that doesn’t necessarily mean that work is hard to do. A book may contain 80,000 words of carefully edited content, that’s a lot of hard work. But writing 800 words almost every day for four months isn’t hard to do.

Lots of hard work, but on a daily level it isn’t too difficult.

Disclaimer: The distinction between hard work and hard to do work isn’t mine. I stole it ruthlessly from fantastic writer and friend Cal Newport. But, I simply love the idea so much that I had to spread the word.

Some people believe mastery and self-improvement require marathons of work. Huge, epic sessions of writing, studying and learning. Massive goals that push their endurance and sanity to the breaking point.

After a few weeks of such grueling effort, they give up. The marathon can’t last forever, and they are too exhausted to run the next day.

This problem arises because the people confused hard work with hard to do work. They confused the thousands of hours of practice mastery requires over years and decades, with the dozens of hours of concentrated practice that exhausts most people. They had the right motivation, just the wrong timescale.

Patience and Showing Up

I believe patience in any self-improvement pursuit is worth more than motivation. Yes, you do need motivation to get your ass out of the couch. But, getting up is only the first step. There are a thousand more that follow it.

Creating Skyscrapers Means Digging Down Before Building Up

Erecting a massive building requires creating a huge foundation first. Without the foundation, any added height will be unstable. I think this metaphor applies to any pursuit.

If a friend told me they were going to start exercising three hours daily, I would only look at one factor to estimate their chance of success: how much they exercise now. If the person doesn’t have the exercise habit at all, they are trying to build a skyscraper on quicksand.

However, if I know the person has exercised seriously for years and keeps a consistent schedule, the odds of success go way up. There is concrete under the new plan. Habits and attitude are the foundation, and if you don’t put any thought into how these will fit, you may collapse.

How to Channel Enthusiasm

Many people get very enthusiastic when starting something new. The idea of putting in a minimal, but still respectable, amount of effort in every day is boring. When I started blogging, I wrote at least once per day, and I probably spent another hour or two every day reading everything I could on how to be successful as a blogger. I wanted to do everything, not the minimum.

The problem with a blind enthusiasm approach is that you fail to build that foundation. As a result, when the enthusiasm goes from a raging boil down to a simmer, you don’t have anything to fall back on.

I’ve found there are two ways you can channel that early enthusiasm so it doesn’t scald you later:

First, invest some of your enthusiasm in forming habits. When you start exercising, for example, commit to doing some minimum daily amount. If you feel like doing a bit more, investing time in research or buying fancy equipment, go ahead. Just make sure you get your 30 minutes of running or 100 sit-ups in every day.

Work Hard. Not All at Once.

Work hard at levels that multiply. Other people may have more talent, connections or outwit you. But don’t let them outlast you.