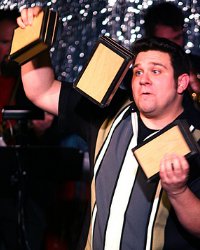 My new motto for 2010, inspired by Cal’s similar suggestion, is to work hard, but commit to less.

To be fair, it isn’t a new motto. I’ve been running with this one for the latter half of 2009, so it isn’t exactly a resolution, but an affirmation of what I’ve already been doing. However, even in the last 6-8 months following that motto has helped me enormously.

How I Learned This Lesson the Hard Way

To be honest, the simplicity movement never really struck a chord with me. I’ve always been trying to live a more interesting, adventurous and accomplished life, not eliminate stress. I wanted to do more, not less.

So, when I had new opportunities, I signed up. When I was offered the position of managing a Toastmasters’ club, I accepted. I took on a volunteer fundraising position. Signed up for an intense project-oriented class which required a lot of travel and a full-time work load.

At first managing a business, full-time classes, full-time projects, volunteering and other activities was fine. But after eight months I was starting to slip. My goals slipped from being accomplished to merely surviving the grind.

The results of this overcommitment binge weren’t impressive. This business went from supporting me full-time in 2008, to struggling painfully in the early part of 2009. I broke up with my girlfriend. My fitness level dropped. Stress was at an all-time high.

I learned my lesson. Everyone has their limit, and I got to know mine.

The Distinction Between Hard Work and Commitment

Later, I learned I could have been saved some of this anguish if I had made a simple distinction in my head: the difference between working hard and committing too much.

The reason I rejected the simplicity movement is, to me, they seemed to ignore the importance of hard work. I didn’t want the 4-hour workweek, I wanted to know how I could work more on the things that mattered to me.

My fallacy was that I assumed working hard and committing to many things were the same. But in practice, the two are often opposite goals.

Why Overcommitting Leads to Underworking

I’ve accepted that as a rule of human nature: have-to’s always dominate shoulds. The things you have committed to always take precedent. Even if they won’t have a long-term impact in your life.

As a result, when you commit yourself to obligations in the future, you reduce the energy and time you have to focus on the really important things. When I signed up as a volunteer, that time and energy was stripped from my day before I could consider working on personal projects.

Sure, I could have just ignored the obligations. But that would mean breaking promises and hurting people that needed me. Not a happy decision to make.

Commitments are like taxes. They get taken off your paycheck before you get to touch them, and if you’re lucky you’ll get a bit back in April. When I overcommitted, I found all of my energy and time was spent before I could touch it.

My solution in the future is to pick only one or two things that matter to me and commit to them. That doesn’t mean I can’t pursue other goals, activities or interests. Just that I don’t make a commitment to them.

For example, when I did my annual review, I had only two goals:

Both of these goals are achievable, but only if I can spend a significant amount of time and energy working hard on them.

This doesn’t mean I won’t have other interests or side-goals. Simply that they will come second. Some people were confused after this article, believing I advocate doing all of your interests with equal commitment levels. Completely the opposite: having multiple interests is possible only if you know which 1-2 of them are absolute musts.

I have many different side-goals I work on in my spare time, but aren’t commitments for me. Here are a few I’m currently working on:

The point is that I put zero pressure on myself to work on these things. I do them because I enjoy them and they correspond with activities I already do as a habit.

Commit Less Must Be Paired With Hard Work

If undercommitment isn’t paired with hard work you just have laziness. This is probably why I rebelled against so much simplicity oriented advice. It didn’t match my reality.

Committing to less can enable you to spend time each day on hard focus. Or it can enable you to play video games all day and crawl Facebook. The will to work hard at the few commitments you do keep is equally important to a philosophy of simplicity.