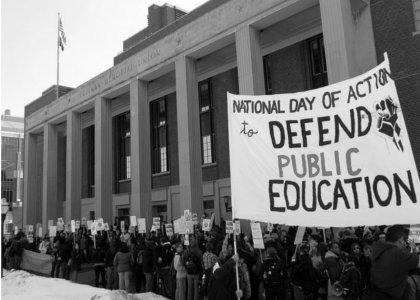 Why haven’t we seen the internet transform education yet?

Music, movies, publishing, software and basically every industry reliant on information is being turned upside down. Having collections of tens of thousands of songs isn’t uncommon now. Being able to watch any movie ever made is easy and getting news minutes within it happening is almost an expectation.

Why, then, do most people who want to learn something seriously still go to school? Why has the web seemingly left higher education untouched?

Will the Web Kill School?

At first the idea seems absurd. Of course people will still go to school, how could they not?

But how many people would have properly guessed that record labels would be crippled or that amateur bloggers would be threatening the job security of experienced journalists? Just because something has been a tradition doesn’t mean it’s immortal.

The problem isn’t technical limitations. Many universities already offer online courses. While distance education classes are often shabbier than classroom productions, that’s an issue of scale, not a fundamental limit on the technology.

Some would argue that the personal touch is necessary for universities. But why? What percentage of student time is spent actually mutually interacting with a professor? Even 10% seems generous.

In that case, why couldn’t the other 90% be produced by the absolute best lecturers or textbook writers. This would make the interactive teaching role the equivalent of the music industry’s concerts, unscalable by the web, but ultimately only a minority of actual consumption.

Imagine if every lecture was the quality of the best TED Talks? Or every textbook had the wit and clarity of a Malcolm Gladwell bestseller? If those were truly the options, why would universities be left unscathed in an internet revolution?

Why The .COM Diploma Doesn’t Exist Yet

If any industry needs a web-based revolution, it’s education. Tuition prices have outpaced inflation here in North America, and for many that means a lot of student debt. The situation is better in Europe, but that’s in part due to taxpayers paying for tuition costs.

However if much of the information content of education were distributed online, the costs could be lowered dramatically. Fees would mostly be for testing or occasional tutoring, far less than the institutional cost of managing an entire university.

So why don’t we see .COM Diplomas with entirely online resources and only nominal fees for testing and tutoring?

Universities degrees signal good qualities. If you have one, it means you’re probably intelligent, hard working and committed enough to invest a few years of your life. It also is a good barometer of field-specific knowledge. A degree in engineering means you probably understand the basics of engineering.

So far, only universities can bestow these degrees. Sure, there are purely online education certificates, but they don’t really compare to their offline equivalents.

But if accreditation and cultural signalling is the major barrier preventing purely online higher-education, it probably won’t last. As of today, most intelligent, hard-working people are going to university because it’s what hardworking, intelligent people do. If enough of those people decide to teach themselves using high-quality online resourcesâ€”employers and culture will change which signals they look for.

How The Web Will Change Education (For the Better)

I don’t see anything fundamentally unscalable with most of what we consider education. Lectures? YouTube. Textbooks? Kindle. Group participation? Online forums.

Testing and tutoring seem to be two areas that would be harder to scale upwards. Testing, because some personal oversight would seem necessary to prevent cheating (although universities aren’t terribly good at this currently). Tutoring, because one-on-one teaching is still valuable even if in-class lectures could largely be replaced with streaming video.

With scalability, the cost structure of education changes. If an education resource will be viewed by millions of people, instead of the hundred or so present in a class, that means fixed costs can go up and prices can go down.

Fixed cost investments in education materials can go up when it costs nothing to provide another copy. Microsoft purportedly spent around $6 billion to develop Vista. And even with monopoly pricing, one edition costs only around $200. Imagine if the same ratios were used for classroom lectures.

Some critics might object that YouTube banality or Twitter attention-spans would infect online education, rendering it impotent against traditional formats. This is ridiculous. The reason little serious online education exists is because it currently lacks accreditation. Learning is hard and without recognition, I’ll probably opt for something easy.

But accreditation is about cultural expectations. If more smart, hard-working people opt to teach themselves online, employers and cultural norms will shift.

How Will Universities Be Affected?

I predict that the most prestigious schools will be hurt the least. Harvard, Yale and MIT will still be incredible brand names, even in a new education environment. Because of their selectivity and networking power of alumni, it may be that the most expensive schools offer the most value outside of the education itself.

Instead, I’m guessing that the low to medium prestige schools will be hurt the most. When online education becomes a radically more affordable version, perhaps with better quality instruction, materials and testing, it will be harder to justify tuition prices.

Looking online it seems as if many of the schools are already beginning to recognize this. MIT, Stanford and Harvard all have completely free, online versions of some of their popular classes. Yet I haven’t seen anything like this from less prestigious universities.

If we see a mass exodus from universities, what will that mean for research? Universities currently conduct much of the advancement of science and research. Will they complete the transformation into innovation centers for the pharmaceutical or high-tech industries? Or will governments have to step in to pay more of the cost of research currently being funded by students?

Institutions May Lose, But We Will Win

As with the music industry, I suspect a lot of the impending change on education will be needlessly be focused on the loss of old institutions. Media reports the saddening decline of record labels or newspapers.

But music hasn’t died and neither has journalism. People now listen to more music than ever before. I carry my iPod with me everywhere. News may be suffering, but it seems like the lowered quality of news is due more to the industry in its death throes, trying to clasp for interest, while distributed online sources become increasingly more credible.

If education goes online, universities may suffer, but education will not. Making education cheaper, better and more accessible will probably mean more educated people, particularly from the economic classes and regions that can currently least afford it.

I’m confident that the internet transforming education is a question of when, not if.

My guess is that for some people, this is a radical notion. The idea that institutions existing for hundreds of years will be forcibly transformed in the next decade or two seems implausible.

But for the people who already use the internet, my guess is that this prediction seems almost tame. For many people who watch TED talks, surf Wikipedia and expect knowledge at their fingertips, it’s already happening.

As an aside, I’m going to be in Austin for SXSW from the 11th until the 15th (this weekend). If you’re going to be there and want to meet up, please let me know. If there are enough people, I’ll try to set a meet-up!

Image thanks to Fibonacci Blue