It’s no secret I almost never do guest posts. But when my friend, Maneesh Sethi offered to write one, I didn’t hesitate to make an exception.

Maneesh is a 24-year old with a resume that most people won’t accomplish in their entire lives. He was an international best-selling author still in his sophomore year of high-school. He took two years off from Stanford to travel the world, learn five languages, build a business that paid for his lifestyle while working fewer than four hours per week, and even started an NGO, SaveThem.net, in India to teach poor kids computer skills.

Maneesh’s secret isn’t that he’s an insane workhorse, he will admit himself he’s lazier than most. Instead it’s a talent for stripping away the irrelevant in pursuing a goal to rapidly outpace the people who spend years working but never see any results.

It would be easy to dismiss or dislike Maneesh. But I prefer to learn from him. Even if you don’t want to live in a desert for a month or become a DJ in Berlin in 90 days without any experience, you can apply his systems-hacking to create your own remarkable life.

Let me tell you a story about one of my employees in the Philippines. I hired Klarc to help me build a habit: at 10:00 every day, he would call me and remind me to floss my teeth.

One day, at 10:32, I received a Skype message. “Excuse me Mr. Maneesh Sir (Klarc always called me sir, even though I asked him not to), I’m so sorry I’m late. We were hit by a hurricane, and the whole village has no electricity! I had to run 8 miles to the next village so that I could call you!”

Would you run 8 miles to remind me to floss? I was paying Klarc $2 / hr (but gave him a hefty bonus after this incident). What are you doing to make yourself so valuable employer would pay 10-20x that amount?

“I went to college. I worked hard and got good grades. I got a degree. Now, I can’t get a job. This just isn’t fair.”

Here are the facts: everyone is doing exactly the same thing. In 2011, there were 19,700,000 college students. At the same time, there are 13,100,000 million unemployed Americans. Look at the staggering disconnect: there are more and more students graduating from college every day, but almost no job creation. What do students expect will happen to them after graduation? [Sources: The US Census and The Bureau Of Labor Statistics].

The truth is, anyone can hire an employee in India for much less money and FAR LESS paperwork than hiring someone from North America. Where’s the incentive for any employer to choose you?

I was sitting down with a friend last night, lamenting the difficulty of finding good employees. When it came down to it, we both agreed: ‘Almost everyone sucks at absolutely everything.’

This is horrible news for employers. It’s almost impossible to find someone good to hire, even on a short term basis.

However, for you, this is AWESOME news. Fortunately, almost everyone sucks at absolutely everything. You don’t have to be the best. You just have to be better than everyone else—everyone who sucks.

Faster Than The Average Bear

Two friends went camping in a forest. In the morning, one friend noticed a bear eating their supplies (probably because he didn’t use a proper bear bag, which I had to do while living in the wilderness for 28 days). The bear, startled, began to charge the two friends.

The two scattered, and one friend yelled: “We’ll never outrun this bear.”

The second, pulling ahead, yelled back: “I don’t have to be faster than the bear—just faster than you.”

In the same vein, you don’t need to be the best in your industry. You just need to be better than everyone else.

How Not To Suck

Getting a job in any industry requires two things:

Most people stop at step one. It seems simple, right? If you’re talented in your work, you deserve the job, right?

Wrong. You don’t deserve anything. If you want something, you need to grab it.

Put yourself into the mind of an employer: “Why should I hire this person? There are 25 other candidates—what makes this person special?”

The shortest path to a goal is not by doing what everyone else is doing. It’s often by doing the EXACT opposite.

How to achieve any goal via the Sex Scandal Technique

When most people approach any goal, they do what everyone else does: Figure out a goal, write down milestones to achieve it, and slowly pursue the milestones.

Unfortunately, everyone else is doing the same thing.

Instead, every successful goal I’ve achieved has followed what I call the Sex Scandal Technique.

For example, when most people decide to become famous, the often do what everyone else does: go to Hollywood, try to meet people, work on their script, etc. But Kim Kardashian found a faster way: sleep with someone famous, make a sex tape, get famous.

In the same way, you can approach your goals by looking at methods of beating the system.

I’m going to show you two of my most successful hacks to achieve crazy goals. First, I’ll show you how to network with the best people in your industry. Next, I’ll show you how I became a “famous DJ” in Berlin (and got to party with Tim Ferriss) in just 90 days.

How to Meet Famous People

I met Scott in person while road tripping for my Hack The System Podcast (which you should totally subscribe to). He let me crash on his couch for five days, mainly because I wanted to beat Call of Duty on his LCD TV. (Check out my podcast interview with Scott here)

While staying there, I met Scott’s roommate, Vat, who is currently trying to become an architect in Vancouver. He was rather interested in my podcast.

“So what’s the point Maneesh? Are you expecting a lot of readers to watch?”

“I don’t really care man: With my podcast, I have an excuse to meet my biggest role models, get an hour of free consulting with them, and great content for my readers.”

Now, all of the people I’ve interviewed (Chris Guillebeau, Ramit Sethi, JD Roth, Jonathan Mead, Tynan, and many more) are friends of mine. They introduce me to other people. They retweet my links. They give me great advice.

“That’s great Maneesh,” said Vat. “But how can I use this idea to become an architect?”

“It’s simple: a three stage process. Just do this:

You can do it in any industry: web design, SEO, architecture, finance, research, teaching, knitting—anything. By virtue of having a blog/interview series, you have an awesome excuse to sit down with experts—and get extremely valuable free coaching, and content for your readers.

This is the strategy I’ve used for networking. Rather than trying hard to convince influential people to sit down with me, I do something that targets their own self interest. Besides, who doesn’t like to talk about themselves on camera?

Partying With Tim Ferriss: How to become a “famous” DJ in Berlin with no experience

Let’s take a look at another example of trying to hack the system. In 2011, I lived in Berlin, Germany, and decided to film a Youtube show: 90 days to becoming a DJ in Berlin. I had no prior experience DJing.

When I moved to Berlin, I didn’t have years—I wanted to become a DJ, but I only had a few months to make it happen. When I asked around, everyone told me the same thing:

“It’s going to take you YEARS before you’ll get your first gig.”

I wasn’t willing to accept that. I didn’t have years—I only had a few months. So, instead, my partner and I figured out a way to subvert the system–we could throw OUR OWN party and position ourselves as the DJs.

Most people think that it takes years to become successful, but there are specific tactics you can use to dramatically decrease that time frame.

We began throwing our own monthly party. We made advertisements, printed flyers, we bought facebook ads. During our second show, just a month after starting, we earned a profit of 1000 Euros ($1500) in *one night*.

Guess what: Within just a few weeks of throwing these parties, we got to host Tim Ferriss live in Berlin. Our party brought in hundreds of people from countries all around the world. 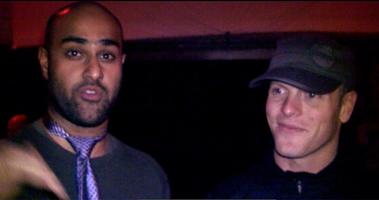 Again, we could have gone the normal route: practicing in our basement, emailing bars, and hoping we would be discovered. Instead, we did what we do best—hack the system, figure out a way to achieve our goals, and execute. The Sex Scandal Technique.

I put together a resource kit especially for Scott H Young readers, just because I love Scott (and you!) so much. Check out this Hack The System page. Drop your email address, and I’ll send you over some awesome stuff I’m preparing specially for you. Here’s what you’ll get:

Thanks so much for reading my stuff, and don’t forget to check out Hack The System.