Today was the first week into my year without speaking English. I wanted to share my thoughts on what it’s been like avoiding speaking English entirely, as a method to learn a language.

First, though, a clarification. When I wrote my initial post about my challenge to not speak English for a year, I generated a bit of confusion. Some people thought I wouldn’t be writing my blog or that I wouldn’t be reading any of my emails (because, then, I’d need to write and read in English).

The challenge is to not speak in English. I’ll still be writing posts here each week and answering my emails. Even within the goal of not speaking English, I was forced to add a narrow set of exceptions: emergencies, anything critical to my business and talking with my parents. I’m being as strict as possible, but I won’t destroy my livelihood or ignore my family for a year to do it.

This past week I was nearly perfect. On the sixth day I had to make a thirty second phone call to my past landlord, because of an error with my damage deposit. Perfection isn’t possible, but I still consider not speaking English for 168 hours with a thirty second necessary exception to be a success.

Both Vat and I, from the moment our plane landed in Valencia Spain, have been speaking entirely in Spanish. We only speak in Spanish with each other and with people we meet. Sometimes this has humorous consequences.

Two English-speaking girls tried asking us a question about the subway, moments after our arrival. We sputtered out some broken Spanish as a response and they exasperatedly asked the room if anyone spoke English. Fortunately, another English speaker was there to help them.

In the supermarket, Vat was confused by Europe’s unrefrigerated milk, and wanted to know if it was actually milk, or a substitute. He went up to a stranger and asked if the milk was real, which in Spanish translates as “royal” and not “authentic” as he had hoped.

With our tutor, I asked him a question about his girlfriend. He told me that she was an enfermera which means “nurse” in Spanish, but I understood him to mean enferma which meant she was ill. I told him that was too bad, and we proceeded to have a confused discussion based on my misunderstanding.

One of the bigger worries I had before starting this trip is that people would press me to speak in English. That, largely, hasn’t been the case. Our new landlord, who we emailed in English, was more than happy that he didn’t need to attempt speaking English with us from the very first “Hola!” at the door.

Quite the opposite, most people have been surprisingly patient with us. Waiting twenty seconds in a mid-sentence interruption for me to pull out my phone’s dictionary app, is a conversation killer I’m surprised most people have put up with.

This isn’t to say the first week hasn’t been without frustrations. One of the biggest has been simply communicating with Vat. More than once, we have discussed something, I thought we arrived at a decision and then later we’re disagreeing about it again.

When we first met our tutor he told me that he was shy and didn’t want to be recorded on video. Since we’re trying to document the trip extensively (we’re going to compile it into one edited video at the end of each leg of our trip) this was a bit of a disappointment.

I thought I had explained it to Vat, and that we had compromised to record the video only of the two of us, in the tutoring session. The next tutoring session, Vat was bringing his camera and planning to record everything, tutor included. It turns out he hadn’t understood the tutor’s objection at all and we had decided completely different things.

This was a small example, but given the amount of coordination required in a world trip with a video project, it’s been one of the most difficult (and will likely be insanely difficult in the early phases of Taiwan and Korea).

The other difficulty was simply arriving. The first day we needed to find the apartment, figure out the transit system and have a conversation with our landlord. At the same time, we’re coming off 24 hours of transit, 9 hours of timezone difference, little sleep from the last two days and the lowest communication abilities we’ll have for our entire three-month stay. If you want to see the result, check out our first day’s recording of Spanish in our daily log.

Despite these initial hiccups, many things were actually easier than expected. The first was actually how fast you learn to communicate under these constraints.

Spanish was my best language of the four prior to arrival. On top of a small amount of practice, my experience with French gave me a lot of the understanding of grammar which is shared in all Romance languages.

But for Vat, things were more difficult. He speaks Hindi and English, so many of the difficult grammatical features of Spanish that I had won through difficulty with French, he was facing for the first time (masculine/feminine, reflexive verbs, extensive systems of conjugation).

However, even for Vat, with the equivalent of an hour of practice per day for only one month prior to arrival, he was able to talk to strangers, talk to girls at parties and explain his opinion on Valencian architecture during tapas with several Spaniards. All in the first week.

My Spanish has improved greatly after the first week. I’m able to express myself about almost anything if the other person has a little patience. I might not have my verbs properly conjugated, and I still struggle each time with the past tense, but, for the most part, people understand me when I speak to them.

Another somewhat pleasant surprise is that the normal fatigue of speaking in a foreign language went away after the first few days. Anyone who has ever tried to speak in another language continuously will know the feeling of exhaustion that comes from holding a conversation of more than an hour or so. I was worried that drain would persist until our Spanish improved, but it seems to be more a problem of starting to speak than of actual ability. Even now, with limited Spanish, I don’t feel tired speaking every day, even if I’m sometimes frustrated by my inability to articulate things.

Our studying plan is rather minimal compared to the MIT Challenge. The most important part of language learning is practice, so engaging in real communication situations is the top priority. However, we’re starting to settle into a rhythm that includes a few other elements to help learn the language.

Every morning, we have a few hours for self-study. This includes about an hour with a grammar exercise book to practice the parts we’ve found confusing in our conversations. It also includes another hour with a private tutor, again for practice and explanation.

Our apartment has a television as well, and so I’ve used my downtime to watch some television and try to pick up new words and phrases. We’ve done the same with a few Spanish movies, hopefully to watch them repeatedly until we can understand them fully.

Most importantly, we’re spending a lot of time speaking. I’ve tried my best to be conscientious about my speech, using the proper grammatical form as best I know how, even if the other party would understand a malformed sentence. As my level improves, this will become more important, as the goal is to shift from being understood to speaking correctly.

The Long Road Ahead

Now that the first week is over, we can breathe a sigh of relief. Even though our Spanish has a long way to go to even remotely approach fluency, the hardest part is over. We’re settled in our apartment, set up with a tutor and have even made a few new friends.

One unexpected challenge I’ll need to manage in the months ahead, is maintaining my other languages. Even after one week, my ability to speak French has deteriorated because I want to replace my French words with Spanish ones. I think this will get complicated further when we learn Portuguese due to its similarities to Spanish.

My plan is to practice a bit of French conversation whenever possible, so I can train myself to switch more easily between the languages. Still, it’s a difficulty I’ll need to manage throughout this trip and in the years after it’s finished, when I want to maintain and improve the languages I’ve learned.

I’m also under no illusion that Spain will likely be the easiest country in my set of four. Its cultural and linguistic similarities to French gave me a headstart. Additionally, European languages have many loanwords I can make use of from English. I won’t have those advantages in Chinese or Korean.

In the meantime, both Vat and I are recording thirty minutes of our actual conversation each day, so anyone is welcome to see how our Spanish is progressing. I doubt most people will want to hear hundreds of hours of audio when this project is finished, so we’re also planning on editing a final video for each country. This will showcase whatever progress we make as well as show what it’s like to live in each country. 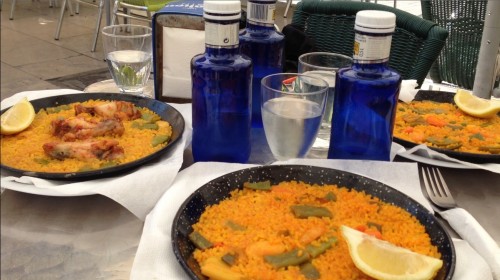 Note: Benny Lewis, who himself speaks over ten languages, is also living in Valencia at the moment and shared his thoughts on our first week!