Sometimes the best part of travel is when it all goes horribly wrong. Getting to Brazil was definitely an example of that.

For the last three months, Vat and I had been living in Spain, not speaking English as a way to learn Spanish. I had put in about fifty hours of work in on Spanish, and Vat about twenty, so when we arrived we could have basic conversations without using English.

Portuguese for Brazil was a different story. Before arrival, I had done about three hours of practice, and Vat—exactly zero. Portuguese is closely related to Spanish, so in the pre-trip preparation, priority was given to getting some basics in Chinese and Korean.

The original plan was to get to Brazil and hunker down in the apartment to learn enough Portuguese so that the all-Portuguese rule could be sustained from the first day. Perhaps unsurprisingly, things didn’t go according to plan.

We arrived in Florianopolis, a tropical paradise located on an island in southern Brazil, after thirty hours of transit. Exhausted from transit, and with only a shoddy dictionary, Vat and I had decided to continue speaking Spanish until we got to the apartment.

This was when our first problem came up.

After using my six-word vocabulary to get the cab driver in the right direction, we discovered that the address given on our rental didn’t include a street or apartment number. Arriving at the right road, the cab driver tried calling our new landlord only to find the number was busy.

This left us stuck outside with our suitcases on the streets of Brazil.

We hauled all of our stuff to a nearby restaurant which had wifi, and after some chatting (and a violation of our no-English rule) we manage to get online and send an email to our host. After an hour of waiting, someone comes to let us in.

The apartment was disgusting. Reeking of paint fumes from a recent renovation, beds and kitchen dirty, internet unavailable and with most of the major appliances broken in some way. This put us in an unfortunate position: keep on this rental, which was expensive and committed us to three weeks, or try using AirBnB’s 24-hour complaint policy and try to find a new place.

After thirty hours of travel, we decided to leave it until the morning and go get something to eat. We get to a restaurant, and I convince Vat to order what I believe to be chicken breasts, but turns out to be a plate of chicken hearts. 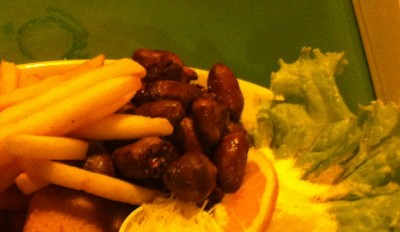 Next morning, we are able to negotiate our way out of the apartment (and violate the no-English rule once again). We get a hotel for a two nights and decide to start Portuguese the next day.

The internet wasn’t proving too helpful for finding apartments. So, we had to resort to the old-fashioned method of going door-to-door looking for a place. By this point, we’ve now learned enough Portuguese to say “I’m looking for”, “rent” and “2 months”. It turns out that vocabulary is the least of our worries. It’s summer now in Brazil, and rental prices are being listed by the day, not by the month, when they haven’t already been reserved in advance.

After canvasing dozens of places, Vat finds a place that might be able to rent for two months, but could only guarantee the next few weeks. We book it for another ten days, giving us a bit more time to learn Portuguese and continue the search.

Back in our hotel, I attempt to make some pasta. Not realizing the glass cover is, in fact, removable and not, in fact, heat-resistant, mid-way through some fusilli, the glass stovetop explodes in shards all over the kitchen. My only moment of intelligence in that ordeal was to happen to be facing the other direction at the time. 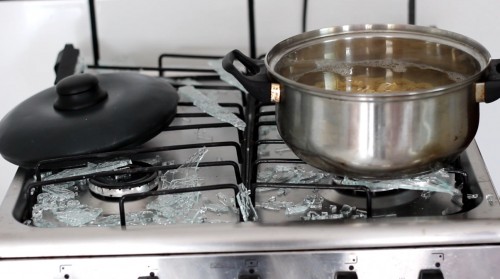 A quick update: this is now the third day in Brazil. We’ve managed to break the no-English rule at least a dozen times since our arrival, and we’re still speaking in Spanish to each other. Hardly an auspicious beginning.

Getting Back on Track

We switch hotels to our new one for the next ten days. The hotel room is a small apartment with two beds crammed into one room, a kitchen (this time, I removed the glass before cooking), and a shower with faulty electrical wiring which results in a fairly unpleasant bathing experience (my solution is to fill a plastic pail up first, insulating me from the shocks, and then wash myself with that). There is internet, but it only works some of the time, and then, it only works outside.

Reinvigorated, Vat and I tentatively switch to speaking in Portuguese. We now are looking for a more suitable long-term stay, which means more door-to-door visits and more chances to struggle through basic conversations.

Eventually we find a realtor agent who convinces one of her clients who was trying to sell her apartment, to rent it to us for two months instead. The apartment isn’t perfect, and the price isn’t cheap, but it’s the best thing we’ve seen since we arrived in Brazil. We hurriedly agree and commit to renting the apartment.

The next ten days, Vat and I are still speaking in Spanish most of the time. We were still finishing up the final video for Spain, and that means a lot of discussions. Note to future self: don’t try collaborating on a documentary film project while trying to speak only in a language you’ve learned for less than a week.

The apartment contract process turns out to be delightfully more complicated than I had imagined. Lawyers are brought in. Fingerprints and parental professions are documented. Dozens of separate meetings are had. I’m half surprised a blood sample wasn’t required.

At last, two weeks after our bumpy arrival in Brazil, we’re settled into a decent apartment and Vat’s finished editing the video. We’re now speaking solely in Portuguese together, after a previous ten days of switching back and forth.

By all accounts, I failed at the stated goal of The Year Without English. Although we had never intended to eliminate spoken English entirely (family, business and emergencies were the three categories of exceptions I listed from the start), the spirit of the challenge was to try living in the language from the very first day. Because we had to violate that rule several times in the first few days, I can’t claim success with that part of the challenge.

But, rather than give in, I want to treat this hiccup as a learning opportunity, so we won’t make the same mistakes in Taiwan or Korea.

The clearest observation is that the no-English rule is quite challenging and doesn’t mix well when dealing with urgent necessities (like trying to avoid homelessness) or complicated work (like trying to cut together a mini-documentary). Spanish worked because the first week we had food, shelter, internet and nothing that urgently required communication for.

Second, although linguistic similarity helps in learning, it doesn’t immediately help you speak. Brazilians didn’t understand our Spanish, and we couldn’t understand their Portuguese. In that sense, despite having a wealth of transferable knowledge from Spanish, I would have been able to communicate far more in Chinese, which I’ve actually studied, than Portuguese, which I hadn’t.

My feeling is that the minimum amount of a language you need to know before going full-switch really depends on your circumstances. Had our original apartment worked out, and the video project been completed, I doubt we would have had too much difficulty going into Portuguese from our arrival.

My plan for Taiwan and Korea is to prepare more before arrival. Although linguistic preparation would be the obvious solution, part of my goal with the challenge was to see what was possible with minimal preparation (not speaking English while already competent in the language is hardly interesting). This means making sure we have a livable apartment, tutor and dictionaries prior to landing so we don’t have to scramble when the challenge is at its most difficult point.

Second, Vat and I have decided not to repeat our problem with Spain and make sure the video is finished before we arrive. Although some editing may be required later on, a bulk of the editing was done in Brazil, which exacerbated problems since we had to make major decisions about the video, and thus had to speak in Spanish.

Despite this failure, I still believe the no-English rule is a good heuristic for language immersion. Even if we failed in a strict sense, after the first two days we were speaking entirely in Portuguese with Brazilians here and, once the video editing was finished, with each other. If my experience means anything, it’s that the no-English rule is really hard at first, but it’s still valuable. If you fall down, pick yourself up and try again.

I wrote this article during my first week in Brazil, but I wanted to save it until I had more than just my initial frustrations to report. Now that we’ve been in Brazil for three weeks, I can do that.

Brazil, and in particular, the small town of Barra da Lagoa in which we’re residing, is beautiful. Lush forests cover rolling hills, bordered by miles of beaches and impossibly blue oceans. People are friendly and nice, I’ve yet to have a negative experience meeting someone from Brazil.

Although the language learning went off to a rough start, we’re now back on track. Vat and I speak only in Portuguese together, and although I’d say we’re a bit behind where we were in Spanish at the same time, the progress of learning has been a lot faster. Portuguese shares the same grammar and a huge amount of vocabulary as Spanish, so hard-won battles with Spanish are already behind us with Portuguese.

The lifestyle is at a markedly different pace from Spain. Living in a small fishing village means some inconveniences (withdrawing cash means taking a 2-hour detour by bus to the nearest city), but also many great experiences (going to one of the best surfing spots on the island is only a two-minute walk away).

I’m taking surfing lessons and going swimming and hiking each day. Although we were off to a bumpy start, Brazil might end up being one of the best countries we stayed at, averaged out over the entire experience. 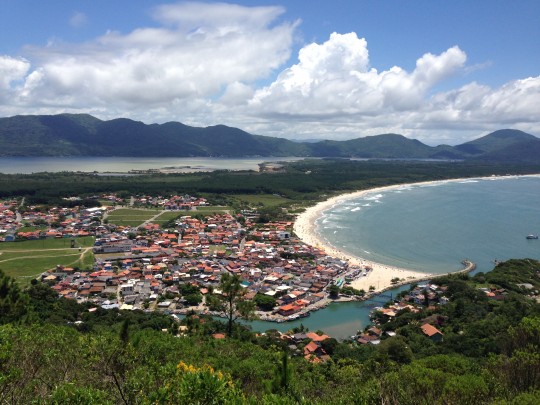