If you’re like me, you probably have a lot of things you’d like to do, but not enough time to do them all.

And this list doesn’t even include all the things I really should do, but often fail to do as frequently as I’d like, such as keeping my home clean and organized, preparing meals ahead of time, reading more books, and all the millions of things I could do for work, but don’t seem to have time for.

In some ways, this is unavoidable. We only have a certain amount of time (and even less energy) to do things like this, and thus some things inevitably get left behind.

Today, I’d like to share a method I’ve been finding helpful for managing all these competing goals I call habit stacking.

What is Habit Stacking?

Habit stacking combines two concepts that you may be familiar with: minimal habits and overlapping tasks.

The first component is minimal habits. This is an idea that says you should try to commit to the bare minimum amount of effort towards a goal, but make it highly frequent. The idea being that the friction of going from zero to some amount of effort in some direction, once overcome, can allow for a much larger investment over time.

I’ve written before about how I’ve done this successfully in exercise by switching my commitment from going to the gym every day (or a minimum number of times per week) to focusing on just doing fifty push-ups.

This commitment is probably not enough for ideal fitness, but the benefit is that it’s easy enough that I almost always do it. Over the last 219 days, I’ve only missed it once.

I still go to the gym about as much as before, but now I don’t need to feel guilty that I don’t have time to go perfectly. Even if I can only go two or three times one week, I know I’m still doing some background physical activity to maintain my health.

The second component of this idea is overlapping tasks. This has a more common name: multitasking. However, I’d like to avoid that word here because it has a negative connotation and is usually used to refer to combining tasks that really can’t be doubly allocated (like trying to watch television while studying).

The idea behind overlapping tasks is that, if you have enough of them, even a minimal investment in each of your possible goals might start to be too much.

Right now, for instance, I have the following minimal habits I’m trying to do (nearly) every day:

This isn’t too much. However, this is also on top of the million other things I usually have to do each day. Work gets swamped, life gets in the way, and sometimes it’s almost time for sleep and I haven’t done some of these yet.

The Danger of Overcommitting

Having a lot of *musts* simultaneously can end up being a house of cards. You can layer commitment on commitment and it’s fine. Until you break one of the commitments and you start to crumble. Too many things to do, and soon you stop doing all of them.

The key is to apply the minimal habit principle, once again. How can I make the habits easier to sustain, so that in a pinch, I can default to a lower-effort input and not break my commitment?

Here, the problem can be solved by recognizing that some of these habits can overlap without too much interference. I can listen to audio in Chinese while cleaning up, for instance, or while doing my push-ups. This allows two tasks to occupy the same time slot.

How You Can Apply Habit Stacking

To apply habit stacking in your own life, start small. Pick one or two cornerstone habits you want to do every single day, presumably forever. These should be:

I started with push-ups and flossing. You may have other goals. I suggest only starting with a couple, just to get a feel for it.

The first thing I noticed is that even easy goals have a lot of days where you don’t want to do them. This isn’t because the habits are too hard, but because your motivational inertia would rather just not do them at all. The power of this method is that it forces you to break that inertia by committing to something you can’t reasonably dismiss without feeling lazy.

The second step, is to see which of these habits are stackable. You probably won’t be able to stack more than two at a time, but this can create an extra layer of safety. If you have several 5 or 10 minute daily habits, that can add up to over an hour of work every day. Suddenly, what was intended as a minimal habit ends up becoming a difficult one.

By having the ability to stack, you can add extra flexibility on the days you need it most. 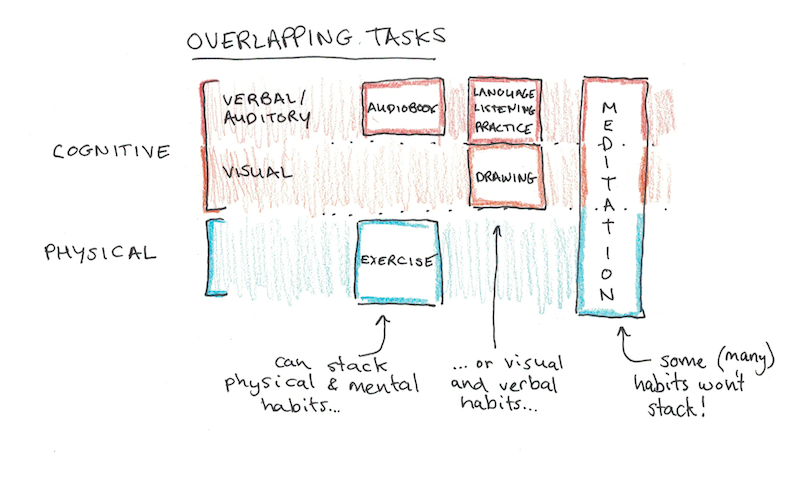 A good way to stack habits is to combine a task which is mostly physical with one which is mostly mental. Exercising + listening to audiobooks, is a good example. Another way might be to combine a task which is highly verbal with one that doesn’t require as much verbal focus. I can often listen to audiobooks if I’m doing a visual task, like drawing, because I don’t need to think in words as much to draw.

You can even start to think about stackability when imagining your set of minimal habits. If you have 10 habits, that require, six minutes each, that’s an hour commitment every day–not so easy, even if each habit is quite minimal. However, if out of those same ten habits, six of them can be stacked, you can do the same in 40 minutes in a pinch.

Stacking habits, and only executing their bare minimum, isn’t ideal. Obviously, it would be better if you invested more time, with a greater degree of focus, on each area you’re trying to work on with the habit.

The philosophy behind minimal habits though, is that the starting point is the one with the most friction. If you engage in something, a little bit, every day, even if it is not ideal, you’ll actually end up putting in a lot more of the ideal practice than you would otherwise if you hadn’t made the commitment.

Think about where you could apply this concept to your own habits? How could you minimize and stack the things you should do, to sustain constant progress?