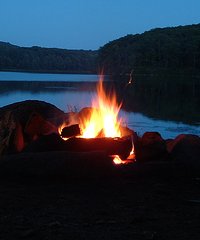 There are few things more human than telling stories. I heard this story in reference to that truth awhile ago and it still rings true:

It had finally happened. Scientists traveled from around the globe to marvel at it. We had finally created a computer that was as powerful as the human brain. It could calculate numbers at a blurring rate and engage in human dialog. There was just one question remaining. Was it just a big calculator or could actually be conscious?

The scientists decided the best test would be to ask the computer itself, “Are you conscious?”. Upon receiving the request the computer processed continuously for hours. Hours became days, but after an entire week the computer had arrived at an answer. The scientists huddled around the screen to see the reply.

In bright green letters on the screen the computer wrote, “You know? That reminds me of a story…”

I’ve practiced my storytelling a lot and although I wouldn’t consider myself a master at the craft, I do have a few tips for people looking to improve their conversations.

1) Start with a Hook

“My friend went to the carwash yesterday. He normally washes it himself, but this time he decided to get it done professionally because he was short on time…”

The main problem with that intro is it doesn’t have a hook. Even if you have a really good ending point, nobody is listening to you anymore.

“You should have seen my friends interior after he took it to the carwash yesterday! He normally washes it himself but he decided…”

This intro is better because it gives me a reason to keep listening to the story. A good hook should give the main point of the story and entice the listener to hear the rest. Even if nobody interrupts you when you tell your story, without a good hook you will probably lose the attention of most the people in the room.

When I started writing articles for this website close to a year ago, I wanted to provide really in-depth articles. So I ended up writing articles that were way longer than they needed to be. Now I’ve learned that if you can effectively summarize an idea in 500 words, that is superior to a 2000 word essay.

Stories work the same way. The point of a story isn’t to fill up time for twenty minutes, but to captivate and entertain the people you are talking to. Don’t say what doesn’t need to be said. Don’t omit parts crucial to the point of your story, but don’t spend half an hour needlessly explaining the background.

What was the point of the story? The last part of your story should always hit upon your main point. In a joke this is called the punch line, or the reason you told the joke. Similarly if you are going to talk about your friends carwash, remember that the reason you are telling the story is because he left the windows down and water got inside the vehicle.

Make sure that the point justifies the length of the story. Top-heavy stories occur when your story is long and has a lot of build-up but the ending doesn’t create an impact. Figure out the impact you want at the end before you start telling it. Nothing feels more awkward than telling a joke and forgetting the punch line.

4) The Purpose of Stories is to Create Feeling

Calibrating your own emotional state while telling a story can be tricky. The best way to tell a story is to engage yourself in it, but react less emotionally to the story than your audience. Feel your story but aim to create a greater emotional reaction out of your audience than you display yourself. Your goal is to make the other person fully experience the story with you.