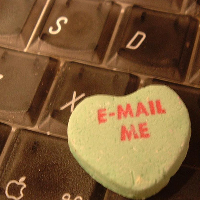 A big pet peeve of mine is people who try to use their email account to have conversations. Email is a bad medium for conversations; if you want to chat you’re better off picking up the phone. Worse, conversational emailing wastes your time and irritates the people who need to read through your messages.

Are You a Conversational Emailer?

I think the best way to describe a conversational email is to look at its opposite, a task-oriented email. Task emails:

Conversational emails violate at least one, and often more, of these rules. The reason behind the violation is usually that the person was trying to email the way they would talk in a conversation. As a bigger sin, the person might be trying to use email just to chat.

Email, as a communication medium, has some serious handicaps which make it difficult to use for conversations. I’d like to show why other mediums work better when you want to chat. I’ll also show how you can cut fluff from your emails to make them task based. Finally I’d like to add a few potential exceptions to this rule, when you might want to break these rules.

Email has a few great advantages when communicating. But some of these advantages become weaknesses when you try to use email to have a conversation. Here are some of the reasons it doesn’t work:

If you want to kick your email chatting habits, here are better alternatives for having conversations:

Forums work better for chatting because they happen in a group environment. I don’t need to read every new message in a forum, just the ones that interest me. I can start up a dialog with several people at a time. If I’m too busy to respond, I just stop reading the forum. Forums aren’t perfect for conversations, but they are far better than email.

When you switch from text to voice your conversations improve. A phone has immediate feedback, adds tone of voice and can’t be skimmed. Phone conversations are probably the second-best alternative, after face to face chats.

For private conversations you need to have online, instant messaging is better than email. IM allows for fast feedback and won’t bloat your inbox. Many messaging programs also allow you to use voice with a microphone which can expand the conversation if you aren’t a fast typist.

The best way to have a conversation is the least technological. Group capabilities, body language, tonality and immediate feedback are just a few of the reasons face to face conversations work best. The only disadvantage is the time it takes to meet in person. If you can’t see someone face to face, I’d default to one of the above three before sending an email.

Why Conversational Emailing Hurts You

Conversational emailing slows you down and increases that chances your emails aren’t read. Writing out several paragraphs of dialog into an email takes a lot of time. Since you can go back and edit your writing, it’s easy to 30-40 minutes stressing over the details of a lengthy email.

Using email for conversations increases the chances your emails aren’t read. I have several friends that get over 100 emails a day. If they didn’t skim their emails, they wouldn’t be able to keep up. As a result, long blocks of text are ignored in favor of short messages. If your request is buried in your conversation, it might not be read.

Why Conversational Emailing Irritates Others

Conversational emailing irritates other people because by starting a conversation, they are forced to join in. Having a conversation doesn’t just waste your time, it wastes the recipient’s time writing a response. Email chatting is usually heavy on both the length of emails and number of emails. For people trying to speed up their inbox, chatters are a nightmare.

How to Cut Chatting From Your Email

The best way to cut chatting from email is to have your conversations elsewhere. I’m not trying to attack conversations. Just because having a few beers with your friends isn’t efficient, doesn’t mean it isn’t worthwhile. But since so many better mediums for conversations exist, why use email?

The next step is to convert your email writing style to be more task-based. This will save you time, increase the readability of your messages and reduces the amount of conversations people try to send you. Here are some tips:

When Do Email Conversations Work?

There are exceptions to every rule and cases where email conversations will work. Here are a few times you might not be able to avoid being an email chatterbox:

How would you rate your own email skills? Are you task-oriented or wind up in lengthy conversations?