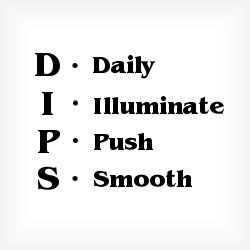 I definitely wasn’t born an early riser. A few years ago it would have been a struggle to move me out of bed before eight and I often slept well into noon on weekends. After looking at the potential benefits that waking up earlier could create, I decided to train myself to wake up earlier.

After rising early for close to two years with some periods for experimenting different sleep habits I’ve found several benefits of rising early:

The basics of training yourself to become an early riser are pretty simple: set your alarm clock earlier and go to bed earlier. But often in the morning haze accompanied by interrupted sleep it can be difficult to see why we are sacrificing snooze time. I’ve found a couple of interesting hacks to reduce the pain caused by the alarm clock that can be summarized with the acronym DIPS.

The first step if you want to wake up earlier is to make it a daily habit. I don’t believe you should pick a fixed waking time and never vary from it, life has too many interruptions for that to work. But what I do advocate is spending some initial time forming a base time. A base time is your natural wake up time if there were no interruptions.

You can create your base time by making rising early a habit. Commit to waking up at a specific time for the next thirty days. After thirty to sixty days of consistent waking time, you can have more flexibility and still return to your base time with less effort. A few months ago my base time was around seven and with less distractions I’m now in the process of bumping it back down to six, a base time I’ve had for most of the past two years.

If you are having trouble waking up in the dark, turn on some lights. Extra illumination tricks the brain into thinking it is later in the day than it actually is. The second step right after you turn off your alarm clock should be to hit the lights.

I’ve found waking up at nine is just as hard as waking up at six, with the only difference being it may still feel like nighttime at six. Immediately turning on the lights can speed up the recovery from the hazy fog of sleep.

Do you find yourself constantly hitting the snooze button? I believe waking up early should be done the same way you remove a band-aid — quickly! Prolonging your sometimes painful recovery from sleep over several ten minute periods is masochistic. Unfortunately in our sleepy haze it feels easier to push the snooze again instead of waking up.

The best way to eliminate snooze abuse is to push necessary activities earlier into the morning, so you have to wake up. If you set your alarm clock for six but there isn’t anything that absolutely must be done before eight, you can expect the groggy version of yourself to press the snooze button until seven thirty. Here are a few things you can push earlier into your day to make waking up faster:

Waking up at five is a pretty daring move if your last few weeks have involved staying up until two and sleeping until noon. There isn’t an impossible physical limitation to altering your sleep habits dramatically, but attempting to adjust quickly can be too difficult to sustain in the short run. Instead, make gradual adjustments to your sleeping habits so they are more likely to stick.

Early rising has a number of benefits, but it is just one pattern for sleep. If most of your opportunities lie in the evening or late at night, don’t force yourself into a less effective sleeping pattern. If you are practically nocturnal currently, try experimenting with waking up earlier. You might find that the added momentum it gives to your day is worth the week or two it takes to set up.