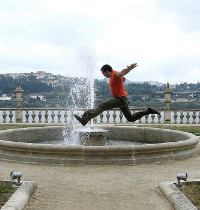 Have you ever had one of those days? You struggle to pull yourself out of bed. Every task you attempt feels like wading through molasses and even simple chores become painful. Maybe you’ve had one of these days recently.

I believe building momentum to be one of the critical factors for whether I have a successful day or not. Once you start procrastinating, it is hard not to stop. In the same way, I’ve found putting a burst of energy early on in the day can carry you forward even when you feel tired.

The difference can often be dramatic. By intentionally creating momentum early in my day I can often accomplish more by noon, than I would working late into the evening on other days. Although there is no perfect recipe for building momentum, here are some ideas I’ve found helpful to start my day with an extra kick:

“Early to bed and early to rise makes a man healthy, wealthy and wise.”


Recently I restarted the habit of waking up at 5:30 in the morning. I had been waking up early, but a few late nights were shifting my natural waking time to around 7:00, and I wanted to restart the habit. Almost immediately after starting the habit I began to notice the benefits on my productivity. Waking up early builds momentum.

I believe getting an early start to the day helps for two reasons:

Part of the problem with waking up early is that you often start off feeling groggy. How are you supposed to work, when it takes incredible effort just to keep your eyes open? My solution to that is to get a bit of exercise in immediately after you wake up. This can snap you out of your grogginess.

Since I usually go to the gym during the day, I don’t have a full workout in the morning. I’ve found just doing a few pushups to be enough to get myself moving.

Taking frequent breaks in the morning is a sure way to kill any momentum you’ve built. I’ve found pushing through 1-2 hours of work shortly after breakfast is the best strategy to keep my motivation high. I try to wait until I’ve tackled at least one of my big to-do items for the day before breaking.

4) Make Use of Productive Cues

Pavlov discovered that if you condition a dog to expect food when a bell is rung, after awhile it will start salivating when you ring the bell. This was one of the most famous psychological experiments of the past century and it applies just as well to humans as it does to dogs.

The way you can make use of Pavlov’s discovery is to notice productive cues you have. These are things in your environment that correlate with how productive you are. Then, by implementing them early in your day, you can build momentum purely by association. A few examples of productive cues might be:

I started to implement these ideas by creating a daily ritual. My ritual currently is to wake up early (5:30), begin with 40-50 push ups to get myself moving and then read during the quiet for 1-2 hours. By creating a ritual, you can condition yourself to start several habits at once. I’m only a few days into the trial, but already I’ve found it to be successful in building momentum.

If you’re interested in trying out some of these ideas, my suggestion is to start a 30-Day Trial. Write down your ritual (don’t make it too complicated or inflexible) and commit to applying it when you wake up for a month. After that period of time the ritual should become automatic so it is easy to build momentum into your day.