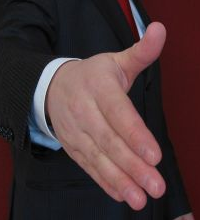 Meeting new people is easy. At least it should be. I just got back to my University residence where I spent part of the first day knocking on random doors and meeting the new residents. I’ve probably met over a hundred new people in the last few days.

But while meeting new people doesn’t appear difficult, it rarely feels that way.

The problem is never lacking something to say. “Hi,” is good enough for almost any situation. “My name is…” is usually a good follow-up.

The problem isn’t usually a lack of opportunities. Short-term situations can make meeting people difficult. But over the course of months and years there are usually plenty of places to see new faces. Classes, work, mutual friends, organizations, bars and even the grocery store can be a place to meet.

The problem is usually you. Anxieties, social politeness and an unwillingness to get rejected all keep you from taking the first step. Sometimes this manifests as an unpleasant feeling when surrounded by strangers. But usually, thanks to some social guidelines, it just becomes excuses or rules for why you should stay inside your head.

Social guidelines are the rules we keep inside our head of when it is and isn’t appropriate to meet people. While some of these rules have some basis in reality, most of them are wrong. These rules may keep us from getting uncomfortable, but if you have too many it becomes very difficult to meet people.

It took me awhile before I realized I had guidelines. I can’t claim to be perfect in seeing through them. And breaking them down isn’t as easy as simply recognizing their existence (more on that later). But once you start to see how artificial these rules are, you have a chance to combat them.

The day I realized I had guidelines was during a conversation with a friend. He said the best place to meet people was on the bus. This had caught me off-guard. I was surprised because, unlike my friend, I almost never felt comfortable talking to someone on the bus. And here he was, asserting it was one of the easiest places to do it.

Suddenly the idea kind of clicked in my head. I had a social guideline that said, “You can’t talk to people on the bus.” I assumed it was true, even though my friend proved it didn’t really exist.

Even though I was able to meet people in many different settings, I had avoided talking to people on the bus. The more I thought about it, the more I saw how everyone has their own set of social guidelines. I was comfortable talking to new people in residence although many of my friends would not have been.

Breaking Your Own Rules

Cause and effect don’t always run in one direction. Your social guidelines may be based on good reasons. You might have said hi to someone on the street and got an odd glance back. You might have asked to meet with someone and they said no. You might have e-mailed someone who could help your business and failed to get any response.

Based on these few experiences, you formed guidelines to keep your social ego from getting hurt. Unfortunately, these rules can become self-fulfilling prophecies. Your own nervousness in breaking a rule can feed the awkwardness that promotes rejection in the first place.

This cycle is why meeting people can be difficult if you aren’t already outgoing. Instead of brushing off a small rejection, it becomes the entire sample you test to see what is socially appropriate.

Meeting new people requires that you test out your old rules. Break some of your old rules and building up social courage. This process isn’t always easy, but here are some suggestions I’ve found helpful: