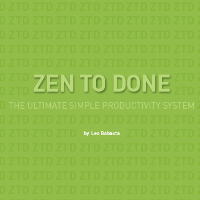 “Zen To Done (ZTD) is a system that is at once simple, and powerful, and will help you develop the habits that keep all of your tasks and projects organized, that keep your workday simple and structured, that keep your desk and e-mail inbox clean and clear, and that keep you doing what you need to do, without distractions. ”

ZenHabits author, Leo Babauta just released his great new e-book: Zen To Done (ZTD). Think of it as GTD, formatted to easily fit into your life. Leo’s suggestions take the daunting task of becoming organized and productive and break them down into easy, practical steps. If you’re still struggling with organization, I suggest you pick up a copy.

At less than ten dollars, the book could easily have sold for 20-30, with all the ideas it contains. Although fans of GTD will notice many similarities between the systems, the difference is implementation. Like many of you, after reading Dave Allen’s popular Getting Things Done, I felt a tad overwhelmed. Leo makes the process a lot less complicated.

What is ZTD? Why is it worth reading?

Zen To Done is a productivity system that focuses on simplicity and effectiveness. This means doing less things, but making sure those fewer tasks are more important. GTD treats all tasks equally. As a result, you may end up with a huge lists, without ever considering what you should focus on.

The best part of the book is it’s approach for integrating the system into your life. By focusing on a specific list of habits, you can slowly make yourself organized. I’ve written about habits extensively, including in my own e-book. The breakdown of ZTD into a series of habits makes it easier to digest than Dave Allen’s version.

Who is this book for?

I believe this book should be required reading for anyone who has read GTD. It will address many of the troubling questions you might be left with. By combining goal setting, elimination/simplicity and habit changing I believe it is a richer method for organizing your life.

Even if you haven’t read GTD, I would still suggest picking up a copy. Two reasons:

Further Suggestions for the Book

As a reviewer, I wouldn’t be doing my job if I didn’t point out some of the books flaws. I’d like to point out that these suggestions are only clarifications. I don’t believe they detract from the value of the book, rather, they address what the book doesn’t tell you. Any system that claims to solve all problems is either meaningless or fake.

Here’s a few things that the book doesn’t address:

Those points shouldn’t be taken as a criticism of the book. I’ve been given dozens of products and books to review since I started this blog. Most I would have had no trouble coming up with a long list of improvements that could have been made. With ZTD I struggled to come up with three.

Simple productivity. It’s the tagline for ZenHabits, and is the goal of this book. It’s one I think the book achieves, and for that reason it’s worth a read.

You can buy the book here for the ridiculously low price of 9.50 USD. When you’ve read the book, feel free to comment on this post about what you thought and how to expand on the ideas.