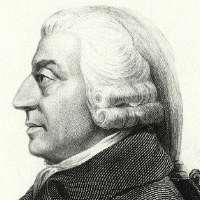 I recently finished reading Adam Smith’s landmark book, The Wealth of Nations. It was written in 1776 and is widely considered to be the basis of the study of economics. One of the few interesting points I grabbed from the book was how Adam Smith defined productivity.

I hadn’t seen productivity defined this way before, and it struck me as an interesting idea. The idea that unless your efforts fasten themselves in some investment, the work is unproductive.

After reading this definition, I was surprised by how much of my time is spent on activities Smith would have described as being unproductive. Answering emails, eating, sleeping, finishing assignments, reading and exercising would all be considered unproductive labor. The effort spent doesn’t fix itself in an investment.

Certainly, many of those activities are still valuable. Just because Smith says exercising is unproductive, doesn’t mean you should sit on the couch all day. But this more limited definition of productivity calls into question the real value of how you spend your time.

Is your time being consumed or invested? Are you working on activities that will return value, or finishing tasks that won’t matter when you’re done? Is your energy devoted to things you’ll care about 5-10 years from now, or will none of it matter?

Add up the amount of time you spend that gets fixed into an investment you own. This could be time working on a new product for a business, time spent increasing your education, time invested in improving your health. Divide this by the total amount of time you aren’t sleeping. This would be your productivity ratio.

Improving your productivity ratio should be your goal. If you’re only spending 1% of your time on tasks that will fix themselves in an investment, you’ll never see any returns. You might be incredibly efficient at completing work. But unless that work is productive, it won’t make a difference in the long-run.

Productivity shouldn’t be limited to just quickly completing your to-do list. Ask yourself if your efforts will fasten themselves to an investment. If they aren’t, perhaps you’re not as productive as you think.