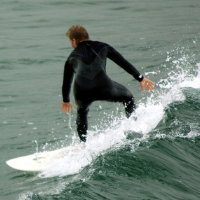 Have you tried to surf without any waves before? It probably isn’t much fun. Catching the right waves can make a big difference. I’ve been thinking about how self-improvement often works the same way. With the right wave, you can make huge improvements with relative ease.

One of those waves is moving day. That is, whenever you change environments, it becomes much easier to make otherwise difficult habit changes. You can use the big change of a move to spur on a bunch of smaller changes.

The Wave of Moving Day

In a sense, a big move can put you in a position of starting from scratch. Normally, in order to make a change, you need to break down your old behaviors then rebuild new ones. After a move, the first step has already been finished, so you have less work to make a change.

I experienced the wave when I moved to University two years ago. I was used to many habits running in the background of my life. Suddenly, the environment is different and everything needs to be rebuilt from scratch. As an advantage, this helped be rebuild some of my socializing habits to meet a large group of people early on. As a side-effect, many of my productivity habits fell apart on impact.

At that time, I hadn’t been aware of the big impact a moving-day wave would have. Now as I prepare to move to a different apartment for the summer, I’m planning on using the wave to my advantage. A few of the things I’m planning to set up quickly as I arrive:

How You Can Take Advantage of Moving Day

If you’re planning a change of scenery soon, use this as a great opportunity for personal development. The moving period will be busy, but try to squeeze in any habit/lifestyle changes you want to make. I recommend writing a list of 2-3 habits you’d like to switch after the move.

For those of you already using the 30 Day Trial method, try to focus on changes that don’t work as well inside that system. If your social circle is changing, you can use it as an opportunity to become more outgoing and friendly. Those changes are harder to make when you spend most your time with people you already know.

Moving to a new city or place is a fairly extreme self-improvement tip. I prefer to ride the natural transitions in my life, than manually generating the waves. But if you’re facing a few tricky habits that are attached to your environment, moving yourself might be a good idea.

A move won’t automatically change everything. But it lowers some of the barriers to making a change.

I’ve mentioned moving day as a “self-improvement wave”. What are a few other waves you can think of?