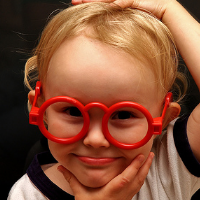 Several weeks ago I had the privilege of hearing an unusual motivational speech. It wasn’t in a seminar, but in a computer science class. The speaker wasn’t Tony Robbins, but a professor Michael Zapp. Zapp interrupted a lecture on heap-sorting to share a valuable life lesson: the virtue of being a geek.

Geeks are people who care too much about something. You can have music geeks, accounting geeks and Perl geeks. Zapp’s ten-minute riff was simple, but important:

Most the people I know, who see themselves as geeks, try to move away from that label. Now here was someone saying that instead of downplaying your geekdom, you should be embracing it.

The Virtues of Geekdom

What is a geek? Although there are many ideas attached to this word, I believe there are two that are important:

Being a geek is more than having a passion. It’s about having an unusual passion. When you see a rabid Yankee’s fan, you don’t usually call him a baseball geek. Baseball is a socially acceptable form of fanaticism. If too many people share the passion, it becomes less geeky.

True, there are some geeks that travel in large numbers. Star Trek conventions may be full of geeks who share the same passion. What I’d like to focus on isn’t just the typical definition of a socially-inept fan. Instead I’d like to focus on geeks as being people who have unusual passions.

“Do What Your Passionate About…” Advice Revisited

I’m a believer that your career should be something you’re passionate about. If you’re going to spend the majority of your waking hours for 35 years, it had better be worth it. Just having a paycheck isn’t a justification for hating your job.

Unfortunately, sometimes this advice isn’t realistic. You may be passionate about basketball, but sheer effort alone won’t get you to the NBA. The competition is too high and the amount of positions is too limited. If you were passionate about accounting, finding a well-paying, meaningful career would be far easier for you.

From the geek perspective, basketball is hard to be geeky about. You may love it. But do you love it more than the millions of other people who dream about being the next LeBron James or Michael Jordan? Your passion may be genuine, but it isn’t very unusual.

Last week Cal Newport interviewed career coach Marty Nemko on his blog. Nemko’s advice was that you should drop your boring passions:

Forget passion unless it’s a rare one. Too many other people will be passionate about it, eviscerating your chances of “making a name for yourself.” Don’t be a lemming. Make a name for yourself in some pursuit that top people rarely pursue.

I’ve made a little graph to explain the difference between being a geek and being passionate: 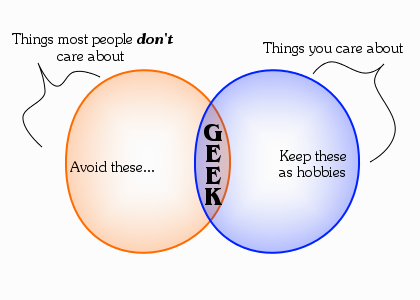 Things you’re passionate about, but aren’t geeky, should be left as hobbies. Areas you aren’t passionate about should be ignored entirely. Your focus should be placed on the overlap where your passions deviate from the norm. Where you love something that bore other people.

I’m passionate about lots of things. I’m interested in writing, computer programing, graphic design, indie games, nutrition, psychology and philosophy. I’m sure that if I spent my entire life working in just one of those fields, I would enjoy it. My passions aren’t limited to one profession.

With so many interests, why focus on turning the boring ones into a career? Doesn’t it make more sense to focus on the areas where you can be a geek? Where you can become the best in the world?

Obviously there is more than just passion and geekyness. There is also market forces, local opportunities and demographic changes that make a difference for what to do with your life. But I think focusing on becoming a geek is a good place to start.

What are your unusual passions?