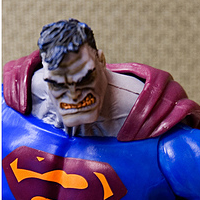 Superman can fly, see through buildings and listen from large distances. He can run quickly and lift large weights. More importantly he is virtuous and his alter-ego is modest about his abilities. With so many excellent qualities, why wouldn’t Superman be a good role model?

The problem with Superman, as it is with every role model that tries to be perfect, is that he doesn’t exist. Supermen don’t exist, so I believe it is better to have incomplete and imperfect role models than to try to find a hero without any flaws.

Who are Your Role Models?

Whether you deliberately think about it or not, everyone has role models. These are people that you use as a benchmark for living your own life. They might be people you know or just celebrities you’ve read about.

Having role models isn’t a bad thing, and it would be incredibly difficult to live without a few. When you hit a problem or dilemma, role models give you guidance about what the ideal decision is. Without any role models you’re forced to reinvent the wheel every time you face a new decision.

The problem is when you try to look for heroes. Your heroes are good at everything and can’t do anything wrong. They are your supermen and gurus, and it’s dangerous to follow after them.

Why Superman Isn’t So Super

There are two reasons why having a perfect role model is dangerous:

I remember reading on an online forum where a woman posted a concern about a famous motivational speaker. Apparently this speaker had said something homophobic and this person wondered if that was enough to scrap any advice he had given.

Perhaps as a heterosexual, white male I’m not in a position to judge discrimination. But, for me, I can respect someone’s advice when it comes to business or time management, even if I’m strongly against their political or social positions. This woman was trying to make the speaker into a hero, someone who was without flaws and she could completely agree with.

The fact is that almost everyone will disagree with you at some point. You’re better off having incomplete role models than trying to turn imperfect people into gods. Having a mix of role models who are each great at different things allows you to learn from those people without ignoring their flaws.

Steve Pavlina, who’s website is here, had a big influence on my writing when I set up this website. He has also written a lot about the Law of Attraction and what I feel are some questionable beliefs about science. But just because I disagree with him on that point doesn’t mean I can’t learn business or time management lessons from him.

Although luckily it doesn’t happen too often, occasionally I’ll get a message from a reader of this site which is overflowing with praise. I like compliments as much as the next guy, but I worry if a few readers have enjoyed a few articles I’ve written and expanded that to assume I’m without flaws.

In truth, I make frequent mistakes and there wouldn’t be a single reader here that isn’t better than me in one or more ways. Most of my writing is a way of sorting out issues for myself, rather than gospel. I try not to waste your time demonstrating my flaws, but I assure you, they do exist.

Another reason to focus on a set of imperfect role models is that going without heroes makes you a better person. By cultivating a mix of different perspectives and strengths, you become a unique person. If you focus only a few perfect heroes, you end up trying to copy them instead of being yourself.

It’s well known in biology that breeding within a family increases the risks of genetic defects. By keeping your gene pool highly focused, defective genes have a greater chance of making an appearance. Incest isn’t good for the health of a species.

By the same principle, intellectual incest isn’t good for your mind. When all your teachers and role models come from the same vein of human thinking, you breed mental defects. Having a diverse set of role models ensures that the flaws of one person are balanced by the strengths of another person.

When You Look for Supermen, You Ignore the Flawed Heroes

The real problem is that when you look for a person to be everything: wealthy, healthy, happy and morally ideal, you miss people that are fantastic, but flawed. Many of my friends I admire for one or more reasons. That is enough for me to learn from them and pick apart their way of thinking about problems. They might not be Superman, but they can still teach.