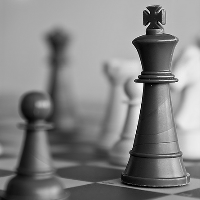 There are few virtues more important than independence. Independence is a requirement for leading your own life. How can you make decisions if every action you take has to be filtered through other people first? Without independence, you can’t be the captain of your life. You must be satisfied scrubbing the decks while someone else sets the direction you’re to follow.

Independence doesn’t mean you never need other people. Most people wouldn’t last a year stranded on an island with no other people to provide support. Independence means that you add at least as much value back as you take from every transaction. You don’t leave a permanent debt between you and another person.

When you build a debt with another person, you lose your independence. If you require another person to support you, that person has power over you. They can withdraw their funding based on your actions, effectively controlling your life. Even if they are benevolent, they may unconsciously use their power to influence your decisions.

If your transactions are fair, you retain your independence. I’m not dependent on a grocery store because, if they decide not to feed me, I can take my money elsewhere. Since it is an equal trade, there is no imbalance of power.

Independence is More Than Just Money

The debt that dependency creates doesn’t just have to be in finances. You can be completely financially independent, but entirely socially and intellectually dependent on other people.

Financial independence is important. Requiring money from other people to live isn’t ideal. Even if you are dependent on a spouse, family member or the government for an income, it shouldn’t become a permanent situation.

If everyone became financially dependent on another person, the economy would collapse. Independence isn’t just a personal virtue, it’s a moral virtue. Avoiding debts with other people makes you in control over your own life. Independence also makes you a creator instead of a user. By putting back at least as much as they are taking, independent people ensure the world stays in balance.

Financial independence, and the consequences of financial dependence are easy to understand. It doesn’t take a leap of thinking to realize that if everyone drains more money than they create, the world will collapse.

Money isn’t the only currency people use. Sure, it’s the only kind you carry around in your wallet, but it is only one form of transactions. Social currency is another method of transactions. It is the currency of relationships, friendships, loyalty and service to other people.

Just as you can be financially dependent, you can be socially dependent. This means you are emotionally dependent on the opinions of the people around you. You care what other people think of you. Worse, you use their whims and biases as a foundation for making decisions on how to live your life.

Someone who is socially dependent can never be authentic. Instead they must constantly ask themselves whether what they are doing is popular or fashionable. I’m sure we both know people who fit this model. They are the people who care more about being liked than being themselves.

Independence here means the same thing it does with finances. It doesn’t mean you don’t need people and are happy living alone. It simply means that the relationship value you contribute outwards at least equals the value you take away. You aren’t dependent on the opinions of other people because you can just as easily make new friends.

A person who has complete social independence feels free to leave friends and relationships that demand too high a price. Just as a financially independent woman wouldn’t keep shopping at a store where the prices weren’t worth the goods sold, a socially independent man wouldn’t stick with friends who demanded that he become a fake in order to have their friendship.

Intellectual dependence happens when you stop thinking for yourself. Instead of filtering ideas through your own powers of reasoning, you accept them blindly. You get caught onto dogma and superstition instead of what is true for you.

I make it no secret that I’m an atheist. But, that isn’t because I follow some secret “Atheist’s Handbook” (if there were such a thing). It’s because after reviewing my personal experiences and my knowledge about the world, that is the best conclusion I can come to. It is the most fulfilling and reasonable answer I can arrive at.

I have far more respect for an ardent religious believer who thought through beliefs for herself, than for another atheist that simply swallowed what he had been told. I might disagree with the content of her beliefs, but I strongly support the method that arrived at them.

Intellectual independence means you are willing to experiment, explore and leave no stone unturned in the search for understanding. You don’t avoid ideas that don’t fit neatly into your worldview, you embrace them. You think through ideas yourself instead of blindly accepting pre-digested facts from other people.

Like all forms of independence, intellectual independence is both a personal and a moral question. Being intellectually dependent is unethical since you are borrowing more thinking power than you are creating. You are using the thoughts of others instead of contributing ideas back to the world.

Independence is a virtue that takes work. Even if you believe it is important, that doesn’t automatically free you from the chains of debt. Independence is a hard virtue to attain. I strive for it with conviction, but it can be hard to completely avoid dependency. But just because perfection is impossible, that doesn’t mean we should give up.

The way to financial independence is through poverty. Imagine you are currently receiving $20,000 per year in transactions that put you into debt. Now imagine that you also earn another $20,000 in fair transactions that you have earned. You are half-dependent, half-independent with your finances.

The key to financial independence would be to adapt yourself to live on the $20,000. By lowering your poverty threshold, you could survive while being completely independent. Temporary poverty is a key to independence.

I say temporary because while halving your income may be uncomfortable, it gives you power. Now that you are no longer chained to other people, you have increased power to expand your income. You may need to go through a rough patch, but it could easily be a first step to even greater wealth.

I remember reading that Sylvester Stallone, refused money when trying to sell his movie script. He believed that if he started accepting money from a job or the government, it would make him comfortable. Instead of following his dream, he would lose his hunger and settle into a lower quality of life.

The movie script he was trying to sell was Rocky, which went on to make him into a millionaire and famous movie star. By temporarily accepting financial poverty for financial independence, he regained the personal resources to achieve success.

Just as a small clarification, by “debt”, I mean debts you don’t or can’t pay back fully. If you wanted to start a business, that might require taking out a loan or getting investor financing. That doesn’t make you dependent, since you are paying the interest price for funding.

The road to social independence is also through poverty. Except in this case, social independence means solitude and loneliness. Few people enjoy complete isolation on a permanent basis. But temporarily sacrificing your social life gives you the power to build new relationships.

I took this step when I was in high school. I distanced myself for most of that time and didn’t form strong connections. I was too dependent on other people’s opinions. Close bonds would have made me follow the crowd instead of my convictions. Temporarily stepping into poverty wasn’t fun, but it was necessary.

Now I’ve completely rebuilt my social circle. I have many friends in different areas and I’m perfectly willing to abandon one group if I need to. I wouldn’t say I have complete social independence, but I’m far closer to that ideal than I was several years ago.

Although this form of poverty doesn’t seem as extreme as the last two, it is often the hardest to face. It takes a lot of courage to go from a feeling of certainty to one of complete doubt. Most people can’t fully take this step, so they slowly shift from dependence to independence with their ideas.

Independence is a Personal Virtue, Not a Political One

If these ideas sound similar, they should be. Ayn Rand wrote about them (although she wasn’t the first) in The Fountainhead

. The book promoted the absolute virtues of independence both in finances, friendships and ideas. The main character, Howard Roark, embodies complete independence, even when it forces him into extreme financial and social poverty.

However, while I agree with Rand’s personal philosophy, I disagree with her political ideals. Independence is important to maintain as a person. But that doesn’t mean we should punish or abandon the people who have difficulty holding this virtue. Being independent doesn’t mean you should abandon the poor, socially weak or intellectually cowardly.

The ultimate ideal is to be independent and use that independence to help other people. Not helping people by making them dependent on you. Helping people by freeing them from their dependencies. Don’t give men fish to eat, teach them how to fish.

Helping someone become independent is much more difficult than just helping them. It’s far easier just to write a check or give compliments. It is much harder to make that person grow. Giving aid without encouraging independence is often worse than not helping at all. When you foster dependency, you are limiting people from their potential.

The value of independence is that it makes you a human being. Dependency requires lowering yourself to a lesser animal, becoming a slave to the people around you. When you have independence, I believe the next step is to encourage the independence of others. Think your own thoughts, live your own life, and help others to do the same.