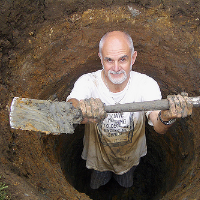 People are normally fairly intelligent.  Although there are many exceptions, people tend to make rational decisions.  However, there are some decisions that most people get wrong (including me).  There is a whole field of psychology devoted to these non-random acts of stupidity, known as cognitive biases.  I’ve always found cognitive biases interesting, since understanding them is the first step to avoiding making bad decisions.

An extremely common bias is forgetting about sunk costs.  Skipping a more formal definition, a sunk cost is a term from economics to describe money (or time, energy, etc.) that has already been spent in a past decision.  Since the money is gone, it shouldn’t be a factor in making new decisions.

Why I’m Fun at Parties

Giving slightly inebriated lectures about rational decision making at a party is part of my charm.  I’m sure my friends that I explained sunk costs to at a show last Saturday also felt the same way.  It makes a good example of how it’s easy to get tricked into sunk costs, so despite the setting I’ll use it:

My friends and I had spent $12 to go to a show.  We decided we didn’t like the music, but there was another party (and DJ) that we would enjoy more, less than 2 minutes away, for $7.  Some of my friends argued that we should stay here, because we paid $12, so we might as well enjoy the band.

At this point I enlightened them about sunk costs.  Since we had already spent $12, that money was gone, and shouldn’t be part of a decision to stay or leave.  A better way to phrase the decision was to pick between staying at this show for free or going to the other party for $7.  The original ticket price didn’t matter if the transfer to the other party was worth $7 to us.

I was only half-joking when I brought up sunk costs, because I feel it’s a trap many people get caught in with everyday decisions.  Although debating between parties on a Saturday night isn’t too important, it can be incredibly important when making life decisions like what career to pursue, what projects to finish and what degrees to achieve.

Should You Quit the Project?

In simple economic rationality, you should stop any project where the payoff is less than the amount you need to invest to reach that payoff.  So it’s stupid to spend $10,000 on a project only destined to pay out $6000 (assuming money is your only measure of value in this example).

Where this gets confusing is when you introduce a sunk cost.  It’s easy to chase a $3000 payoff when you still need $4000 in investment, if you’ve spent months and years working towards it already.  I’m sure we all know personal examples where we stick with doomed projects out of the misguided desire to finish what we start.

Avoiding sunk costs means you need to remove any past investment from your mind before you make a decision.  In my personal example, this meant forgetting I previously made the (bad) decision to spend $12 on one party, when deciding to stay or switch.  For a project, this means forgetting the time you’ve already spent and focus on what you still need to spend.

I think the sunk cost fallacy is similar to another human bias of valuing the things we have more than the things we don’t.  When you spend months working on a project, you feel ownership of it.  As a result, we make irrational decisions to stick with it, because it’s our project.

Staying with the Degree or Career

A lot of University students need to face a sunk cost problem.  Midway through a degree program, they decide they don’t want a job in their chosen field.  Should they finish the degree anyways or switch?

This is a complicated decision with many factors, so no simple trick can automatically decide the right answer.  However, if you view this problem through the sunk cost lens, you’ll realize that the time already put forwards towards the degree isn’t important.  Whether that time was invested or wasted, it can’t be changed, so you need to focus on the future.

If you were midway through a 4-year Science degree and wanted to switch to Arts, your comparison should be between the 2 years you have left in Science and the 4 years needed for Arts.  Once again, it is easy to bring back the past years and use them as a starting point to justify wasting more time in a failed path.

The same idea could apply with a career.  Your past experience isn’t a factor in staying or switching.  Instead you should pretend you were deciding today, would you pick your old job, benefits and salary or would you pick a different job, with it’s starting pay and benefits.

How to Remember Sunk Costs

I’m just like everyone else in forgetting about sunk costs.  I have irrational attachments to pursuits and projects.  I’m as biased as everyone else.  But I think being aware that you’re likely to make stupid errors means you’re more likely to catch them before they become life-changing decisions.

Obviously, sunk costs are just one tool for rational thinking.  They don’t automatically make the right decision.  For example, I stayed at the $12 social because my friends decided to stay.  Switching to a party by myself wasn’t worth $7.  You might also stay with projects for the psychological satisfaction of completion (which is a hard value to quantify) or you may stay in a path for reasons that can’t be measured.  But at least being aware of sunk costs gives you a bit more control.