Below is a brief excerpt of one chapter from Think Outside the Cubicle, my guide for how to get more work done, when working at home. 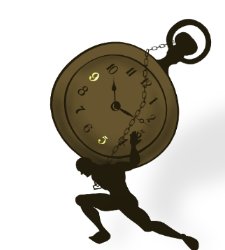 The Invention of the 8-Hour Workday

Humans didn’t evolve to work 9-5. Human beings evolved as hunter gatherers, which aside from starvation, inter-tribe wars and occasionally being eaten by a tiger, wasn’t a terrible lifestyle.

Hunting involved brief spurts of intense activity, followed by large amounts of leisure time. It was skilled work, as anyone who has ever tried to catch a moving animal with a sharp stick can attest to. It required focus, as all senses had to be carefully attuned to the movements of prey.

Hunting required knowledge. Jared Diamond noted in his Pulitzer Prize winning book, Guns, Germs and Steel, that he felt hunting and gathering required more intelligence than many of the occupations today. Hunters had to distinguish between hundreds of different sounds, tracks and fungi in a hostile world.

Most importantly, this lifestyle rewarded specific results, not time invested. Either you caught food for your tribe and family, or you starved. How’s that for a productivity incentive?

Suddenly with the invention of agriculture, this lifestyle that had been evolved for hundreds of thousands of years was gone. Agriculture didn’t reward the brief spurts of focused activity. It rewarded continuous effort and maintenance. The traditional workday was being invented here as farmers had to keep a constant eye on labor-intensive crops.

Agriculture also removed the egalitarianism of the hunter-gatherer lifestyle. Now that you could stockpile food, one person could be significantly wealthier than the rest. With differences in wealth comes differences in power. Instead of just having a tribal leader, large hierarchies could be created with a few people on top and many more people on the bottom.

Farming fundamentally changed how people worked. Despite it’s incredible advantages to the world, this revolution is still a recent one. Our genes are still expecting that we’ll be chasing antelope and collecting seeds, and human innovation has moved us away from our natural rhythms.

Anthropology buffs will have to excuse my gross simplification of all human history into a productivity analogy.

In a more recent revolution, human nature was broken into a new shape again. This time it was the creation of industry. Instead of working outside in a field, you could toil inside in a factory.

Furthering the departure from the hunter-gatherer lifestyle, factory work relied on incredible specialization, often at the price of skill and knowledge. Instead of being trained to hunt dozens of wild animals, in ever-changing terrain with thousands of cues from nature needed to guide you, you repeated one action, thousands of times per day. The logic of specialization won against our genetic heritage and humanity moved indoors.

Instead of being outside, people worked in large buildings, often tightly packed with other people and machines. Instead of being an tribal organism, chasing after your next meal alone or in small groups, humans became cells in a much larger organism. An organism which had little use for their creativity and individuality.

Our genes haven’t had time to evolve to an industrial lifestyle. While this paradigm fits the logic of capitalism and rational economics, it doesn’t fit the logic hardwired into our DNA. We traded brief spurts of intense focus and activity, for long days of continuous, monotonous work. We traded skilled, knowledgeable work for cog-like, highly specialized activity. We traded the sunny, grasslands of Africa for the belly of a concrete cube.

In this environment, even an 8-hour workday is transformed into 10, 12 or even 16 hours.

The Information Age and a More Natural Workday

Luckily, life is not all doom and gloom. From industrialization, humans are going through another shift. This time, however, it’s going in the right direction. The information revolution is replacing humans with robots, and allowing more and more people to survive on highly creative, knowledge-intensive fields.

Sure, there may not have been any computer programmers in the savannas of ancient Africa, but there are more similarities with information intensive work and our natural working rhythm than with factory life.

First, information work depends on highly skilled labor. You may not be able to distinguish bird calls and antelope tracks, but you do need to know the difference between PHP and MySQL. Knowledge work has come back and creative work is no longer just a luxury of a select few.

Second, brief spurts of activity become more logical than continuous workdays. A successful innovation, algorithm or design hack can be envisioned in seconds but be worth more than hundreds of hours of mediocre work. If I write a wildly successful article, I may generate thousands of new readers and increase my income by thousands of dollars over a few years. That kind of extreme-win situation is completely alien to a factory, or even an agricultural environment.

Third, while income disparities and hierarchies still exist, the world is becoming more egalitarian. Knowledge intensive work and quickly changing environments rewards faster, small organizations, so many people are becoming freelancers, entrepreneurs or joining small start-ups. The world is shifting from the multi-thousand person conglomerate, back to the small tribe.

Finally, results are rewarded over time spent. If you’re in a knowledge-intensive field, the amount of time you spend typing at your desk isn’t important. What matters is the number of solutions you can create. While a farmer or factory-worker must be rewarded for the hours invested into carefully growing her crops or repeatedly welding.

The problem is that, while the world is changing, many people are still stuck in the 8-hour workday paradigm. Admittedly, many people are still working in factories and farming is a profession that will continue on for centuries to come. But if you’re working at home, studying, freelancing or building a business, you aren’t in that paradigm anymore.

So while you’ve regained many of the lost attributes of your ancestors, many people are still coached into a factory mindset. They believe productivity means working non-stop from 9-5. That breaks should be no more than 15 minutes long. And repetition is work, while creativity is wasteful play.

The main argument of this book is that, while work has changed, we haven’t. Human nature has been the only unfortunate constant in our societal evolution. So, now that we’re starting to shift back (at least, in part) to our former working styles, we need to change some of the ideas we’ve been taught about work.

From Continuous Labor to Brief Spurts

Time management is the old philosophy, energy management is the new one. In a later chapter I’ll discuss the ideas in Tony Schwartz and Jim Loehr’s book, The Power of Full Engagement, which introduces this model of productivity.

Instead of viewing yourself as a machine that can produce output given time, see yourself as a workplace athlete. For every expense of energy, you must also refuel. Instead of running all day chasing antelope, you need to conserve your energy and plan a focused attack.

From Specialization to Craftsmanship

Instead of meticulously practicing a single skill, today’s information worker needs a complement of skills, knowledge and practice in order to produce results. More and more people are becoming digital artisans, creating entire units from a set of skills, rather than just contributing a single part.

This switch means focusing as much on training, learning and personal growth as on output. Jonathan Fields has a great article about why his clients pay not to be first. He can earn $10,000 for a few hours of work, not because his time is worth that much, but because he spent thousands of hours initially developing that talent.

The major change I’d like to argue from this book is that the concept of an 8-hour workday itself is broken. The problem isn’t in spending eight hours every day, but that we should be measuring our days by the time inputted at all. Later in this chapter I’ll introduce my system of weekly/daily goals that is completely task-based. That means that it doesn’t care whether you finish your day at 9pm or at noon, all that matters is what you accomplish.

Time has become a poor yardstick for performance when I can accomplish 10x the results in one hour than I can in one week. When that disparity of productivity occurs, a switch to a task-based approach is necessary.

This is a brief excerpt of Chapter 1, “Don’t Work 9-5”, from the book Think Outside the Cubicle.