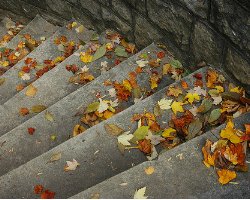 Recently, I managed to complete my first pistol squat.

A pistol squat is a one-legged squat where you hold the inactive leg straight out in front of you. It requires considerably more balance and strength to do than a regular one legged squat.

Finishing it got me thinking about a big problem that prevents many people from succeeding or even getting started: not knowing which stairs to climb.

The Biggest Psychological Obstacle to Accomplishment

I’m going to make a bold claim: that progression ignorance is the biggest psychological obstacle to accomplishment. At least in the majority of cases.

Most people accept that succeeding at something will take a lot of work. What trips most people up is not knowing the progression between getting started and finishing. As a result, they hit a quagmire of motivation in the middle and fail.

Friend and blogger, Cal Newport, gave me a similar example. He argued that if you make it your goal to get a book published, you might decide the first step is to write every day. You’ll have initial motivation, but after a few months, you might start to doubt yourself.

Is all this writing really going to lead to a book deal? Am I just deluding myself? These people didn’t know the progression, so when they couldn’t figure out which stairs to climb, they got completely stuck, disheartened and failed.

Contrast this, more typical approach, to the one Cal himself used in going from student to successful, published author:

Before he even sat down to write, Cal contacted a friend who referred him to a publisher. The publisher, who didn’t work in Cal’s prospective book market, nonetheless explained the entire process of getting a book published successfully. That person also helped Cal contact a more appropriate agent for his book. After, Cal did even more research on the progression from amateur writer to author.

Only coupled with all this intensive research into the progression of a successful author, did Cal write.

The Difference Between Amateurs and Professionals

Cal’s story brings up an important distinction in my mind: the difference between amateurs and professionals.

Contrast that to Cal’s approach, which I feel is a more professional strategy:

The key difference, in my mind is step #3 of Cal’s strategy. Investing a non-trivial amount of effort into researching the right progression.

Cal understood the obstacles facing prospective authors. So, instead of just writing and hoping for a book deal, he was smart. In addition to working hard, he used his network to find experienced people and asked them for advice. I’d guess he also did considerable online and paper research into the path to success in the book industry.

How I Trained for My First Pistol Squat

The problem is that, for most people, if they tried to hold one leg out in front and do a squat they would fail miserably. Some people might not even get the front leg out without toppling over.

The pistol squat is a great example of a somewhat mysterious progression. You can’t train for a pistol squat just by doing a pistol squat. It can be hard to figure out where are the stairs between your current level of fitness and completing one.

For me, I followed a path similar to Cal’s. It started with resesarch. Beast Skills is a great website for bodyweight fitness skills, and the author offers many tips for intermediate steps. I had also read other articles on variations of the pistol squat which were a bit easier.

After that, I started working on the progression. I worked on one-legged squats until I could do 10-15 in a row easily. Then I worked on leg raise exercises to strengthen the muscles involved in keeping the inactive leg straight, during the squat. Finally I completed the squat, with success, a few days ago.

You Can Never Research Perfectly

Obviously, a pistol squat is a simple example. If you’re starting a new business, for example, the progression is far less clear. Instead of one possible road for success, you may be faced with dozens or hundreds.

The point of research isn’t to remove the inherent ambiguity in a field. You’re never going to be able to make a business in a cookie-cutter process, no matter how much research you do.

The point of research is to keep you motivated during the progression. If you’ve done a non-trivial amount of research into what success requires, you’ll have 10x as many ideas when you get stuck. Instead of frustration and failure, your challenge will be to restrain yourself from trying to implement every possible idea you have for succeeding.

Research can start online, but it must come into contact with people.

The biggest mistake I made in running this business was to network poorly. When I started out, I contacted few people, and at times I was definitely using the amateur approach I described above. Only other people can really tell you which stairs you need to climb.

My point isn’t that you’ll never get lost. Just that you should bring a map.