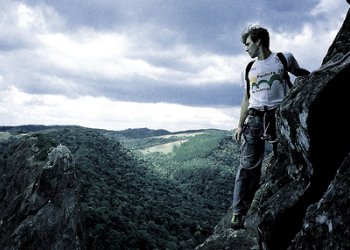 I’m a fan of meta-skills. These are the skills that allow you to learn faster and master new disciplines more quickly. I love meta-skills so much that a good portion of this blog writing, and my entire upcoming program are devoted to them.

One of the most important meta-skills for becoming good at anything is being able to push through the frustration barrier. This is the early phase of skill acquisition where you suck at it. The skill isn’t fun, because you haven’t reached the level of proficiency where you can actually enjoy it.

A perfect example is learning a foreign language. When I started learning French, the process was difficult. Speaking French wasn’t enjoyable. I had difficulty understanding simple things and the effort wasn’t rewarding.

Now, I’m still not fluent, but I actually enjoy French. I’m reading my first novel in the language (The Count of Monte Cristo) and I’m currently spending my winter holidays with a Belgian family, speaking French exclusively. These are experiences I wouldn’t have enjoyed if I had got stuck at square one.

How the Frustration Barrier Cuts You Off From New Experiences

The frustration barrier doesn’t just make learning more difficult, it also cuts you off from new life experiences. When you face the barrier repeatedly in one area of skill, you may confess to yourself that you are simply not born with the talents necessary to be successful in that area.

In my life, an interesting consequence of this was dancing. When I was younger, I was a bit clumsy and introverted. Therefore I never tried dancing, and when I did I was lousy at it. I had just accepted that I might not possess the gene for uninhibited party enjoyment.

But, being the optimist that I am, I signed up for dancing classes one day. After a brief introduction (note: overcoming the frustration barrier) I found out I actually liked to dance. To the point where I love going to nightclubs and dancing.

That’s a simple example, but I think many people get in there head a false belief that, “I’m not born with the talents to do ____” simply because they never invested the initial effort to overcome the frustration barrier in that area of their life.

The Meta-Skill of Rapid Learners: Dominating the Frustration Barrier

I later discovered that most people can become good at almost anything (not necessarily spectacular, but good). The key is mastering that meta-skill of overcoming the frustration barrier. Once you defeat the early part of skill acquisition where learning is painful, you can start reaching the part where mastery and hard focus feel good.

I don’t believe there is one grand key to overcoming the frustration barrier. But I do believe there are many heuristics you can use to help yourself push through this difficult phase.

As always, practice is important. If you practice running headlong into the frustration barrier, it is easier to do it again. This is why I believe people like Tim Ferriss, Benny Lewis or other seemingly statistical anomalies in learning exist. They have mastered the meta-skill of frustration barrier ascension, so that any new skill is comparatively easier to acquire.

Here are some of my favorite heuristics for overcoming this initial phase:

Let go of the ego. When you just flatly admit you aren’t very good, you stop trying to protect your self image and appear qualified.

This may go against the traditional confidence hypothesis, until you understand that the goal isn’t performance. It’s to embrace your awfulness and use that embrace to keep you going despite your missteps.

#2 – Surround Yourself with People Who’ve Done It

You need to believe it’s possible. The only way to do that is to be immersed in people who have succeeded in the path you are now going through.

Not only will their great ideas for success rub off on you, you will be able to face the frustration barrier knowing that, at one point, it will get easier.

Or, as Cal Newport would suggest, invest a non-trivial amount of time into understanding how to master your chosen skill. When you do research two things happen:

I’ll admit, it’s easier to enjoy things your good at. However, just like you can have fun on a cloudy day, you can have fun being lousy at a skill as well. Fun is mostly about creative perception, so if you learn to enjoy the intensity of the challenge you are under, you can surmount the frustration barrier.

Sometimes the best way to beat the frustration barrier is just through discipline. If you commit to practicing a certain amount, every day, you can eventually defeat the beast just by putting in enough time. I’ve done this for numerous fledgling skills where my internal resistance would otherwise defeat my desire to become good at it.

Of course, having a community of enthusiastic people and regular follow-up doesn’t hurt either. That’s the main reason I created Learning on Steroids, to create an environment to teach these sorts of meta-skills (while at the same time employing some of the tactics above to make it easier to overcome the frustration barrier).