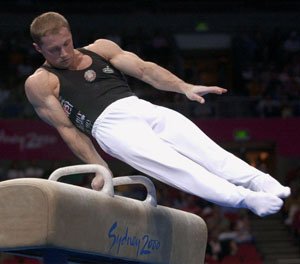 I’m taking a break from my normal rants on mastery, adventure and the pursuit of the ideal life to talk about a side-pursuit of mine for the last few years: bodyweight fitness.

What is Bodyweight Fitness?

If you’ve ever done a push-up or chin up you’ve already experienced a bodyweight exercise. Unlike strength training with weights, bodyweight exercises do exactly that–they use your body’s weight to create resistance and build strength.

I’ve had normal strength training exercises as part of my workout routine for awhile now. But while strength training tends to focus on increasing the weight used, bodyweight exercises tend to increase in difficulty by changing the form of the exercise.

So, as an example, a typical strength training exercise is the benchpress. The major way to increase challenge on this is to just add more weight. Such as, going from 100 lbs to 200 lbs.

Why Go With Bodyweight Training?

Because it’s fun. Honestly, that’s the major reason I’ve started integrating it into my workout routine. It offers an interesting challenge, particularly when my strength levels have reached a plateau after years of exercise.

Some side benefits I’ve noticed from the practice is an increase in functional strength. That is, I find the benefits of bodyweight exercise translate more easily outside of the gym. Functional strength itself is a popular fitness movement, with the main goal being optimizing strength for practical activities.

Another side effect has been improved flexibility and core strength. These are two areas I would often neglect when lifting weights which are important for overall fitness.

Although physical appearance isn’t my main reason for exercising, I like to joke that I spend time in the gym to look like I spent time playing sports. I think bodyweight fitness, employing more minor muscles in a variety of exercises, makes that easier.

Beast Skills – Or Cool Tricks to Impress Your Friends

A friend sent me a link to this website, which has a great summary of bodyweight fitness in general and gives detailed tutorials to perform some impressive physical feats.

Part of the reason I’ve enjoyed bodyweight fitness is that it is very satisfying to complete a particular exercise for the first time. Although reaching weight goals (bench pressing 200 lbs, deadlifting 300lbs, etc.) are satisfying, they are difficult to sustain and are approached by degrees.

Bodyweight skills, in contrast, often come all at once, after perfecting easier skills, and tend to stay with you after they are first achieved. I’ve reached my maximum benchpress of 175lbs several times, only to fall back after a training setback. However, after finally achieving a one-arm pushup once, I’m now able to do it easily and consistently.

What I’m Training, And Why I Don’t Care How Fast I Reach It

As with the title of this post, my main skill I’ve been working on is a handstand pushup. I can get over 5 in a row, provided I’m supported by a wall. The real difficulty with this skill hasn’t been the pushup part, but the handstand part, and I’ve had to do a lot of work on my balance and wrist strength.

Some of the skills I’ve completed in the past are wide leg one-arm pushups, elbow lever, L-seats, pistol squat and jumping one-leg squats. A few I’ve been training but haven’t reached are:

However all of these goals are just for fun. I’ve learned that having too many goals, too many commitments and priorities is just as bad (or even worse) as not having any. Putting pressure on myself to reach these targets wouldn’t only distract from my more important goals, but it might even take out some of the fun I have in pursuing them.

Mastery as a Side Dish

I’ve spent a lot of time writing in the last few weeks about mastery. Mastery of valuable skills is not only a key ingredient to a successful professional life, but also to a successful personal one. Being good at things matters.

Putting pressure on yourself in one or two areas of mastery also makes sense. Goals allow us to focus and work harder. Maybe more importantly, it allows us to work longer on a problem, not giving up when we stumble.

But just as the pursuit of skill is important as a main course, it can also be a side dish. You can work to become good at things without goal setting or added pressure. Striving without pressure may not yield the fastest improvements, but it can often be the most fun.