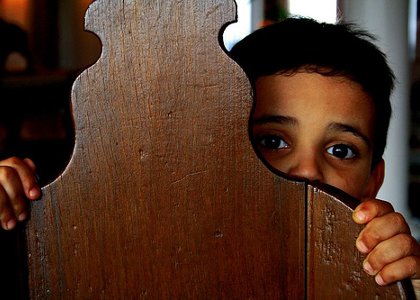 Fear is the enemy. At least, that’s what we’re told.

Pick up just about any book from starting a business to getting in shape, and fear is the villain. It’s the obstacle every success must overcome and the reason behind every failure.

But what if fear is good?

If you put your hand over fire, you feel pain. It’s the not-so-subtle way of your body protecting itself. We all understand this intuitively. Pain is part of nature’s design to keep your hand out of the fire.

Somehow, with the “psychological” emotions, most people take a different stance. They’re irrational, people proclaim, and we’d be better off without them (the science says otherwise

I remember reading a blog entry several years back where the writer talked about going through a major depression. She had taken medication, but her eventual solution was self-improvement. She felt, in some cases, you’re depressed because your life sucks, not because of a chemical imbalance.

I won’t comment on treating depression with medication. Some researchers believe depression is neurologically different than sadness, others feel it is simply a prolonged, intense version. Regardless of which is correct, medication can help people. I’ll leave that debate for the doctors and patients.

But what I did find interesting about the article was the writer’s comment on society as a whole. That many people view the negative emotions themselves as the enemy, be it depression or fear, and not what they signal. An attitude similar to unscrewing the fuel gauge on a car so it won’t read empty.

Can Fear Be Good?

The common attitude towards fear is much like the fuel gauge on the car. Instead of trying to make the gauge more accurate and useful, the answer is to pull it out from the dashboard.

No, I don’t think that every fear is rational and all fears are good. I feel fear is neutral—it’s how we channel it that makes it good or bad.

I believe fear can be a powerful ally, instead of just an obstacle to overcome. It has the power to focus you on what’s important, prepare for upcoming challenges and be cautious in unknown situations. Yes, it can be harmful, just as pain can be chronic, but that doesn’t mean I would like to eliminate pain while my hand is in the fire.

Fear can be helpful if: you fear the right things, you understand the fear, you control the fear and you use the fear.

Too much energy is wasted being afraid of the wrong things. Being afraid of airplanes even though driving a car is more dangerous. Fearing failure when it costs you nothing. Phobias and worries about the improbable while ignoring the substantial risks we take every day.

No, I’m not saying you have complete control over what scares you. But you use your imagination every day to highlight certain worries and ignore others. Even if you don’t have 100% control over this process, you can focus on some things over others.

A useful fear for me when I started this business was that I wouldn’t be able to make a full-time income by the time I needed to start looking for a job. By emphasizing that fear in my imagination, I was motivated to work much harder.

I still feel that fear lingering, even though I’ve earned nearly double my expenses for almost a year. Having it in the background sharpens my focus to make sure I don’t stop working hard and lose all the effort I’ve put in.

A common suggestion to overcome your fears is to write out the worst case scenario. After looking at it and realizing it’s not that bad, your fear will seem ridiculous. I feel the exercise also assumes, in some ways, that most our fears have no basis in reality.

I prefer to see it another way: all of our fears have both a degree of truth and a degree of ridiculousness.

My chosen fear of not being able to grow my business in time is ridiculous when applied to the worst-case scenario test. After all, having to work an ordinary job for a few years or more is hardly a significant problem. But there’s also a degree of useful truth. Reaching that first milestone would allow me to work full-time, increasing my odds of sustaining success.

The same is true of asking someone on a date. The fear has both a degree of truth and ridiculousness. In reality, the worst-case is fairly minimal—no one will probably notice if you fail. The degree of truth in the fear is that your timing and delivery may affect the answer you get, and you could have a relationship or end up alone.

I’m not saying that this degree of truth is motivation to concede to the fear, far from it. Recognizing this duality—that fears are both somewhat true and somewhat ridiculous—is how to use them to your advantage. So you can take action where it matters.

Fears can be good and they can be harmful. It depends on how you use them. Phobias, on the other hand, are almost always bad.

Similarly, sadness or anger can be useful. The former pushes you to solidify tight relationships and consolidate losses. The latter prevents you from being cheated or bullied. However depression and rage are almost never useful. Their intensity makes them impossible to channel effectively.

Controlling a fear means controlling the intensity. If you have a debilitating fear of something, you need to expose yourself in steps until that fear is manageable. Having some nerves before a speech is good—it forces you to prepare and concentrate. Being unable to ever speak in public because of fear is not.

In the end, fear is just another type of motivation. It’s not as pleasant as enthusiasm or mania, but it pushes you to take action on some things and avoid others, just as all motivations do. What matters with motivation is what you apply it towards.

In some ways, the world could use more fear in the right places. Fear of being mediocre, ignorant or wasting your life on pursuits that don’t matter.