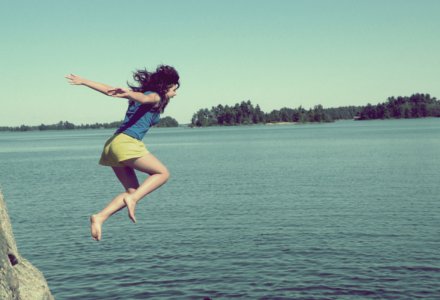 If not now, then when? Perhaps more importantly, why then and not now?

I’ve been thinking about those two questions a lot lately. I feel like most of the time answers to the second question are just a weak excuse. Someday isn’t better than today, often that someday is never.

The problem is worse for growth-minded people. When you see your life as successive waves of improvement, it’s easy to feel that tomorrow really will be a better time. You’ll have more money, freedom and wisdom. Why not wait until someday?

The Principle of Now

Given this problem, a good principle I’ve been suggested is to only expect the future to resemble the content of the present. If whatever you feel is important doesn’t exist in some form today, it won’t show up in the future.

Following this idea, the would-be entrepreneur should do something entrepreneurial—even if it’s impossible to start a full business yet. The future philanthropists should give a dollar or two to charity, even when they are broke. If you want to be passionately engaged in your work, you should find some element in your work that you can love today.

This rule of thumb won’t work in every case. Not all waiting is procrastination. Not all delays are delusions about future motivation. But it works enough of the time to combat the vice of “someday” that I think it’s a worthwhile principle.

The principle doesn’t mean every project, goal and lifestyle you want to pursue should begin today. Sometimes that’s impossible. Sometimes trying to do so would be foolish.

Rather, the principle is a litmus test. If you hope to have something in your life someday, you should be able to have some piece of it in your life today. If the content of today doesn’t resemble your hoped-for future, you’re probably fooling yourself.

The idea is to not just act on your goals, but to live them in some small way right now.

The Difficulty in Beginning Today

Following this principle isn’t easy. Sometimes I feel I’m getting it right, making those small adjustments to my current life to hopefully create the seeds for larger change in the future. Other times I fail miserably.

One of my “someday” dreams is to work on a humanitarian project. To donate money and time to a cause I care about that has no personal benefit. But this has always been a “someday” task—something I’d start when I had greater income, more time or the right idea.

Sometimes I feel I’ve held up to my principle in this regard. I’ve volunteered as a fundraiser in the past and I donated money to the Haiti relief effort.

Other times I feel I’m a long way from reaching my standard.

Several months ago, as I was preoccupied with growing my business and living in France, I was speaking with my friend Maneesh, who was also growing an online business. Except he was also in India, building an NGO teaching kids how to use computers. Wait, had I just fallen into the trap of “someday”?

I’ve also had an idea for a novel in my head for the last couple years. But I’ve yet to set hand to keyboard in writing anything for it. There’s always something more practical or expedient I should be working on. But if not now, then when? I don’t have an answer to that question.

Like most of life’s worthwhile principles, making the content of today reflect the ambitions of tomorrow is far from easy.

Although I’ve failed to meet my standards in some places, I’ve also had successes using the principle of now. This blog, business and what will soon be my full-time career all started after posing a similar question to myself.

I was interested in personal development and had an interest in sharing my ideas about it. At the time though, I was hesitant to write anything. After all, I was only 17, had little life experience, zero writing experience and anything I could say would probably seem naive sometime in the future.

However, I couldn’t answer the question of “when” the someday I’d be ready would come. So I stopped waiting.

Of course, it started with content before commitment. I wanted to share my ideas, but being hesitant, I started by making a game (something I had more experience with at the time). Only later did I transition to doing writing exclusively.

Time will tell whether my early ramblings were half as profound as I’d hoped they were. But the results in my life, offering me a career, interesting friends and incredibly opportunities were certainly worth it.

When is Your Someday?

The answer to all of life’s problems isn’t to just get started. I think most of us can appreciate that. But when is the “someday” you plan to pursue? And are those ambitions of tomorrow justified by today?