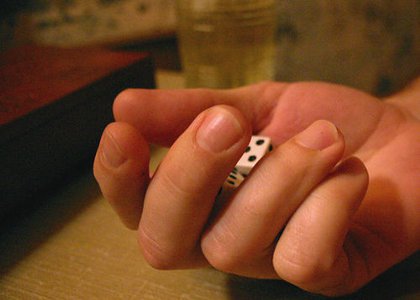 How would you live if success in anything were mostly luck, not effort? It’s an interesting question to ask, because I’m not sure it’s hypothetical.

Life being mostly about luck isn’t as fatalistic as it sounds. But, living would require a different perspective. This is article is a thought experiment on what that perspective would need to be.

I think if the statement, “success in life is almost entirely luck,” were proven true, it would depress most people. After all, it seemingly takes our self-determination out of the picture. A world where effort doesn’t help you win more than the slightest degree feels profoundly unfair.

But, in truth, I think how you feel about it would depend entirely on how you define luck.

Consider gambling on coin tosses. The specific outcome of any coin toss is entirely dependent on luck. However, assuming the coin is fair, the probability of it landing as heads or tails is fixed. If I offered you a bet which cost $1, but paid $10 if the coin landed on heads, you would happily accept.

I sometimes play poker, and it’s a perfect example of a situation which, at the level of individual outcomes is almost entirely based on luck—you either get good hands or bad ones. However, viewed from the level of probability, it becomes a game of mostly skill.

This kind of first-order luck is often called risk. It’s a situation dominated by randomness, but since the odds are known in advance, you can develop a strategy to take advantage of it.

But first-order luck is a rarity. How many people could possibly calculate the odds of success before starting a relationship or choosing a career?

Consider now a type of second-order luck. This is where there is not only randomness in the specific outcomes themselves, but also in your knowledge of the probabilities of those outcomes. This is often called uncertainty.

An example of this might be deciding your major in college. Within each major, there’s a probability of success. Joining the improv troupe may have a small, but unknown, chance of landing you a major television role. You don’t actually know the odds of landing that gig before your choice.

But even second-order luck isn’t a hopeless situation. Just as in the poker game, you can adopt a strategy which may lose on the individual outcomes, but tends to win eventually. Paul Graham writes an excellent article about being upwind, as a way of navigating these situations of uncertainty.

Thinking about this third-order luck, it doesn’t seem terribly far-fetched. How many of us make life decisions where we not only lack knowledge of the outcome and probabilities, but are also unaware of many of the options?

When I started my business, I had no idea that running a course online was a possible avenue of success. So, from the perspective of the original me, starting the business five years ago, I was making a bet on third-order luck. Not only did I not know whether I would succeed or my odds of success, but I wasn’t even aware of all the options that could result from my decision.

But, if you’ve read up to this point, I hope you see that even this situation isn’t hopeless. When the possibilities are unknown, it makes sense to adopt a strategy which seeks them out. Living in such a way as to expose yourself to the idea of as many possibilities that could exist.

To me, the situation in the poker room is the anomaly. Real life has more orders of luck. The last, third-order case, is probably closer to the situation most people find themselves in. After all, if you’re choosing a partner to marry, you definitely haven’t tried all the possible options, yet people still manage to make a decision.

Do We Unconsciously Ignore the Importance of Luck?

Whenever I listen to life advice from someone who has achieved great success, there is a certain flatness to it. Successful entrepreneurs tell people to go out and start businesses. Basketball legends tell people to practice incessantly. Movie stars tell people to not give up on their dreams.

The flatness of the advice, I feel is that, in hindsight, we strip away a couple orders of luck. Things that were originally uncertain and unknown feel like destiny. How much of their success was an excellent strategy and how much was just a dumb bet on an unusually good hand?

Even if this bias isn’t universal, and effort still matters a great deal, I think it probably makes sense to navigate the world as if there is more luck than less of it. Again, this doesn’t need to be fatalistic. Knowing the world has a couple orders of uncertainty, calls for a different strategy of living, not nihilism.

How to Navigate a Mostly-Luck World

This section could fill a book (and already has

), but here are a few of my thoughts on how your life strategy changes when you live in a mostly-luck world:

I enjoy poker because it trains you to emotionally divorce yourself from the outcomes of a particular hand, and commit to a strategy. Winning a pot doesn’t mean you played well. This is a life lesson about ignoring the randomness of outcomes and focusing on the strategy of the game.

I’m sure there are similar lessons to learn once you start examining life from the perspective of multiple layers of luck. Strategies develop which only make sense if you assume a few orders of uncertainty. The implications I’ve written above are just a handful.

Are Our Lives Dominated by Luck or Effort?

My feeling is that real life is a hybrid of the extreme picture I painted earlier and our more common intuitions. Some decisions we make are clearly buried within several layers of luck. Who to marry, which career to pick, where to live, what to do with your life are all tangled in a web of uncertainty.

However, there are others which are more straightforward. I’m currently working on a fitness goal which is almost entirely effort. It’s not nuanced strategy, it’s showing up, every day. Some goals are also more luck or effort depending on the scale you examine them. Choosing a major may be luck but succeeding within the major is mostly effort—the two aspects are inseparable.

Which do you feel dominates life? If luck does dominate, then how do you adapt to it? Please share your thoughts in the comments!