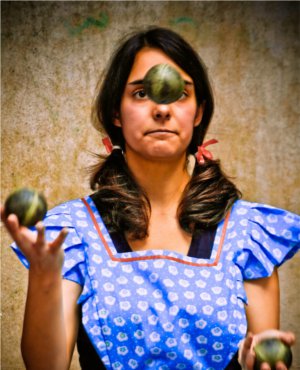 I like variety. I run a business full-time, but I’m also a full-time student. Over the last several years I’ve taken on: weigh-lifting, charity fundraising, web programming, public speaking, game design, speed reading, cooking and French, at some time or another. I don’t claim expertise in any of them, but I dabble.

On the surface, juggling so many different pursuits seems to be a recipe for failure. How can you get anything done, when you want to do everything?

Is Variety a Vice?

People who study high performance all seem to argue the same thing: lack of focus is bad. Malcolm Gladwell argues that ten thousand hours of practice are necessary to become world-class

. That means decades-long focuses, to the exclusion of other activities.

Cal Newport also demonstrates that the secret to impressive achievements is focus:

But here’s what’s interesting: when you spend time around Rhodes Scholars, … [you reach] a surprising conclusion: the proper reaction to an elite student such as Nicholas is not “I should be doing more,” but instead: “I should be doing less.”

Both of these authors paint a particular picture of success: the minimalist who focuses hard on a specific obsession to become successful.

Can You Juggle Pursuits and Still Become Great?

I actually agree with Cal. The minimalist obsession is very likely a great strategy for success. But it misses part of the story.

That story is there are plenty of counterexamples of pursuit jugglers who have achieved great successes. People like Richard Branson or Tim Ferriss, who have shunned the call for focus and excel in varied interests.

Tim Ferriss justifies his rationale for having multiple obsessions as being akin to holding a diversified portfolio of stocks. If one of your pursuits isn’t going well, you have the others to provide psychological stability.

Even Cal himself, I would argue is less minimalist than his philosophy suggests. While obtaining his PhD in computer science, Cal also wrote three books and runs one of the largest student advice blogs on the web.

Life advice isn’t a formula, ultimately, but a strategy. For every “answer” to a problem, there is someone who will suggest the exact opposite. The interesting thing is that they may both be right.

The minimalist obsession is an excellent strategy. But that doesn’t mean it’s the only one.

How to Live a Varied Life and Still Get Stuff Done

The reason I’ve taken on so many pursuits isn’t because I believe it will make me more impressive. I do it because it’s fun. Sometimes adventure matters more than efficiency.

The suggestion, therefore, isn’t to go out and start a dozen different activities. Instead, it is: assuming you already have varied interests, how do you manage that so you can still get meaningful work done?

I can’t say I’ve found the perfect answer, but the strategy I’ve used so far breaks into three parts: not juggling pursuits in parallel, separating interests from commitments and emphasizing recurring themes in my goals.

I’ve taken on a lot of different pursuits over the last several years. But I rarely have more than two or three at the same time. That makes a huge difference.

I’ve taken on the practice of forcing myself to take a sabbatical from one pursuit before starting the next one. This allows me to avoid the problem of chronic distractions—I can try many things without ever feeling overwhelmed.

When I’m taking on a challenging project, I often try to have only one focus for a period of time. In January and February of this year, I was focused on bringing in new students to my rapid learning course. After a successful opening, my focus right now is my fitness for the next two months.

By taking on varied interests serially, you can give the retrospective sense of an incredibly varied life, while retaining focus each step of the way. (As an aside, a perfect example of such serial obsessions is the novel Forrest Gump)

Much of Cal’s philosophy, I feel, targets not people who have varied interests and pursuits, but people who have too many commitments. Students who believe they need to join every club to make their resume sound impressive. Entrepreneurs who can’t turn down a single opportunity, splitting each day between a dozen projects.

There’s a subtle difference between pursuing an interest and making a commitment. On the surface, both seem to be an investment of time. But excessive pursuits can easily be scaled back in a crunch; excessive commitments cannot.

Trying out a new pursuit has no cost. Two months ago, I started teaching myself a bit of Python. But other commitments took up my time and I stopped working on it. Maybe I’ll pick it up again, maybe I won’t, but in either case, I don’t feel guilty or pressured.

Taking on a new commitment has a definite obligation. Some of these commitments are to other people. For this reason I rarely say “yes” to requests on my time. For each yes, I have to implicitly say “no” to dozens of other people.

Sometimes these commitments are to yourself. If I set a business or fitness goal, I create an obligation to myself. Goals are only useful when you use them sparingly, aware of their power to commit a large chunk of your resources to a particular end. If you set goals for dozens of different things at a time, they are just whims.

With my interests, I don’t let my past skills dictate my pursuits. Four-and-a-half years ago, I was a lousy, self-conscious dancer. But I decided to take a Latin dancing class just for fun. I can barely remember how to salsa, but it was the push I needed to build my confidence. Now I love dancing.

I actively try pursuits that I know I will be terrible at. Turns out, with a little practice, I’m often wrong.

While my pursuits rarely follow sequential logic, my goals usually do. Furthering the distinction between interests and commitments, I try to use commitments to build on past skills. There are two reasons for that:

First, when you are starting out with a new skill, it’s hard to know what to expect. A month or two of dabbling is probably necessary just to get an idea of where you are with the skill and whether you enjoy it enough to continue with it.

Second, by putting commitments into recurring themes, you can make progress. This blog and business started as a side project, like any other. But after I saw successes, I emphasized it again in further projects. If a life of solitary obsession is boring, a life without any overarching theme never goes anywhere.

The truth is, a varied life, juggling dozens of different pursuits over years, isn’t too different from a more austere, minimalist obsession. The real counterexample is the majority, who struggle to do the same as everyone else, only slightly better, never leaving the comfort of familiarity.

Image thanks to garryknight