One of the most vexing philosophical questions is whether or not human beings have free will.

On the one hand, we certainly seem to have the ability to make choices. While what I decide to do with my life feels influenced by outside factors, it does feel like I am the one ultimately making the decision.

On the other hand, huge swaths of scientific evidence seem to undermine the idea of free choices.

Behavioral genetics says that much of our behavior is influenced by our genes. I don’t choose my genes, so if my genes explain my choices, what role is there for me? Even if it isn’t your genes, your culture determines much of what you think and believe. You don’t pick your culture, upbringing or any of those other factors, so if those things choose for you, what role do you play?

Some scientists have argued that free will is an elaborate illusion perpetrated by the brain. That the conscious mind isn’t the CEO of the brain—making and executing choices. But the PR department. Confabulating reasons to explain that behavior, once it is made by unconscious processes.

Psychologist Jonathan Haidt uses the metaphor of the elephant and the rider, arguing that we are not the stampeding elephant, but the rider, vainly assuming he has control over the much larger animal beneath him. 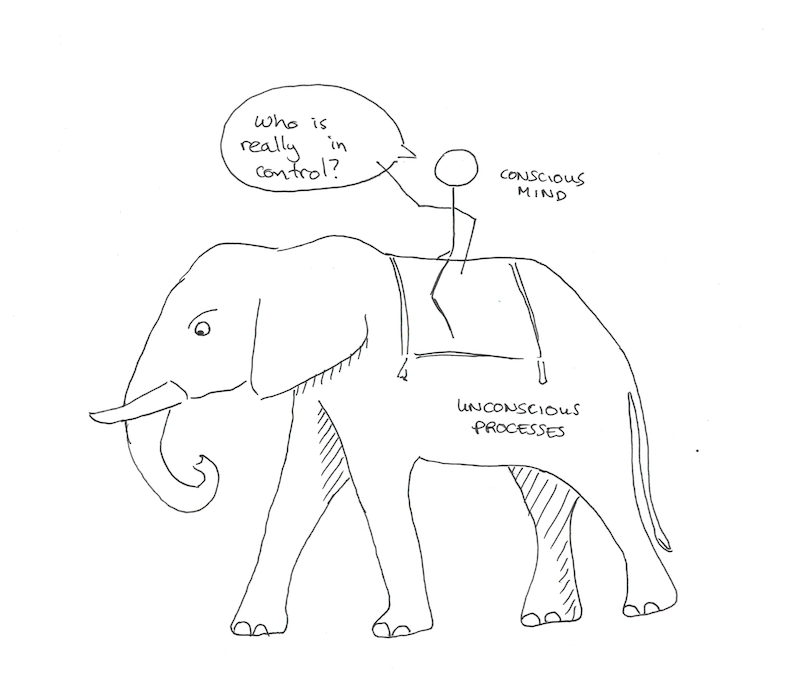 Can Choice Exist in a Scientific World?

My own belief is one of compatibilism. This view argues that, even if we do end up living in a completely materialistic and deterministic universe, something like free will does exist.

While I don’t like the term “free will” for the baggage it represents, I do believe it is a folk psychological concept that none the less has enormous utility. Believing that something like choices exist in the world is enormously useful, and that as a model for human behavior they work extraordinarily well.

In my view, there are two different views of the world you could attack when attacking free will. One is a metaphysical critique of the concept of human agency and choice. This is attacking the idea that human choices and decisions are somehow separate from the world, yet influence it causally. Such a view is common in many religions, and yet contradicts a lot of what we know about physics and brain science.

The second is to go further than this, and not merely attack the metaphysical idea, but also the practical idea of choice. This is the idea that suggests that people can’t really be held responsible for their own actions or that, “it doesn’t really matter what you do, because you don’t have control over you own life.”

I sympathize with the first argument, but I soundly reject the second one.

To me, the people who are making the second argument are simply making a category error when talking about hierarchical systems. They are pointing to a low-level phenomenon, and using it to negate the existence of a higher-level one.

What do I mean?

A good way to understand this problem is by way of computers. Note, even if the mind ends up being nothing like a digital computer, at the really abstract level, this isn’t important. Computers simply happen to be the most complicated things in the universe that we actually fully understand from top to bottom.

In a computer, there is a lot of complex stuff going on. Because of this, we often choose different levels of description, from a hierarchy of concepts, to specify patterns of what a computer is doing.

Consider the idea of “clicking on a link.” What does that mean? Well, I move the mouse cursor over to a piece of underlined text and press the left mouse button, loading a page on the other side.

Now ask, do “links” exist inside the computer program? Clearly they do. And it’s the most useful way of talking about the behavior of users on a website. Worrying about what’s happening at lower levels of abstraction isn’t “more accurate” it’s wrong. It’s the wrong layer of the hierarchy to meaningfully understand what’s going on.

Imagine, however, that some computer scientist were to tear apart the computer and see that, unfortunately, there were no links to be found. Instead, there were merely registers and logic units built on transistors. By carefully damaging certain transistors, or disabling certain registers, we could create links that don’t go anywhere when you click them.

Would such a computer scientist shout “Aha! I’ve proven that links are an illusion,” or suggest that, “this is further evidence that links do not exist and computers really are engaging in a process of shuffling bytes, rather than ‘clicking’ on any ‘links.’”?

That would be silly. A computer scientist knows that beneath the concept of a link, there is enormous amount of lower-level programming and hardware processes. That those processes are themselves not “links” and can be engineered to break down in certain situations doesn’t undermine the fact that “links” are still the correct concept to use when describing the higher-level behavior in most situations.

Choice as a Higher-Level Phenomenon

Choices, I would like to argue, are like links, and the act of choosing is like clicking a link. It is a complex process that contains many other processes, which themselves are not choices!

This is why I take issue with many working in neuroscience claiming that detailed examinations of the brain, and unusual experimental setups somehow are evidence that people don’t routinely make choices in their everyday lives.

Again, if the argument is simply being made against the metaphysical idea that free will somehow comes in from outside the material universe and causally influences things, then I have no issue with it. But if it is extended to argue that, practically speaking, we should stop talking about “choices” since they don’t exist, then I think this is as mistaken as a computer scientist denying the existence of hyperlinks and clicking behavior based on evidence involving registers and logic units.

The Anatomy of a Choice

The challenge right now is that with our incomplete understanding of psychology and neuroscience we are not in the position of the computer scientist when understanding linking behavior. We can’t go from the atom up and figure out exactly what constitutes a choice, versus an unconscious action.

It may also turn out that our folk psychological concept of a choice is perhaps too fuzzy. Maybe there are different kinds of choices, that have completely different properties, and it would be better to speak about them more precisely than we do right now.

Despite the revisions that may come from increasing science, I’m highly skeptical that science will judge that choosing, or anything like it, as an obsolete description of human nature. Rather, what we will do is figure out what are the underlying mechanisms that facilitate choices, and those will almost certainly be made of things that themselves are not choices.

If we are made of biological components, which are themselves made of atoms, there can be no other option. Since atoms, and the behavior of atoms, almost certainly don’t have choices, then the sub-component of human choices will be choiceless as well.

The Implications of Choice

All this is to say is that dismissing the practical relevance of choosing, or its moral implications, as our knowledge of lower-level brain mechanisms, is profoundly misguided. Like the computer scientist who discovers that the complex user interface she sees on the screen is actually caused by transistors, doesn’t undermine the concept of “links” or “clicking”, neither should the discovery of unconscious brain processes which underlie decision-making, negate the concepts of “choice” or “agency.”

We are a part of the universe, not separate from it. The thing which separates us from the simple quantum fluctuations of atoms, or chemical shuffling of microbiology, is huge orders of complexity built on complexity, rather than a difference in kind. Choices, and the implications of being something which possesses the ability to choose, is something which fits into that picture, rather than stands apart from it.