Win or lose, it’s mostly luck. Whether you get the date, close the sale or get your article digged and tagged throughout the net, most of it was just a roll of the dice. But just because simply living makes you a gambler, doesn’t mean it is time to despair. It just means you have to know how to play the odds.

Luck is everything you don’t understand and don’t account for when you make an attempt. If you could accurately account for all the physics that go into a spin of the roulette, it wouldn’t be random. But because you can’t or don’t, it’s only chance whether you hit Red 32 or the casino takes your chips.

Success is easy to explain but hard to predict, especially in the short-term. Most market predictions, including some made by popular pundits, wouldn’t score better at predicting the next best investment than a monkey throwing darts at a blackboard. It’s easy to look back and say it was your discipline, strategy or full head of hair that helped you win, but most predictions are guesswork.

As a blogger, I know that some articles I write will just take off. A couple posts here including Habitual Mastery, Double Your Reading Rate and How to Ace Your Finals Without Studying, became huge hits. When Habitual Mastery got picked up across the blogosphere my daily traffic graph took a ninety degree bend upwards.

Looking back at these wildly popular posts and similarly popular ones I’ve written it was easy to start picking out distinctions that made them popular. All three of those pieces are fairly long, over 2000 words (Habitual Mastery was in five parts). Popular articles tend to make a point that isn’t just rehashed common sense, but new ideas. Most of my popular articles were ideas I had sat on for a few weeks before finally writing about them.

But all this analysis of individual outcomes turned out to be nothing more than a wasted exercise. I wrote several series after Habitual Mastery hoping that the in-depth coverage would create a similar effect, but most never took off. I have made frequent lists of tips like Double Your Reading Rate, but most were relatively quiet. I can usually get a link or two per article I write, but a good post can get dozens. Trying to analyze why these pieces were smash hits didn’t help me one iota in replicating those results.

Malcolm Gladwell’s, The Tipping Point is a fascinating book documenting why some ideas seem to spread like wildfire. Although the book is a great read, it misses one point. A tipping point is a great way to explain, but horrible when predicting. There are just too many variables to take into account in order to easily predict individual successes.

When it comes to a single roll of the dice, don’t blame yourself when you roll low and don’t give yourself too much credit when you win big. It’s mostly chance.

I believe that all truths are more useful than a deception, even if they are more difficult to apply. Luck is one of those truths that is hard to accept, but if you are smart you can use it to your advantage. I’ll detail a couple of the methods I use to help manage the influence of chance.

1) Know What You Control 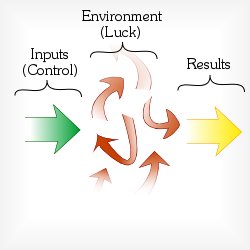 The first method I use to manage chance is to focus on what I can control and ignore what I can’t. This may sound obvious, but in practice it is more subtle. The real skill here isn’t to be able to distinguish between the things you have 100% control over and the things you have no control at all, but in emphasizing the areas where you have a larger degree of control.

It may not be profound that you don’t have a big influence on the weather. But it took me a fair bit of thinking before realizing that I didn’t have much control over which of my posts got popularized. With a lot of variables outside of my awareness, focusing on my input made more sense. Focusing not on the big wins but the general quality of every post was more important in the long term.

Your input is where you have the most control. Since the world is large and complex and your time is limited, focusing more on your input minimizes luck. Trying to understand things you can’t control is useful, but nearly as useful as understanding the things you can control. What is your input towards your aims? Are you focusing on that or are you focusing on the parts of the environment that are difficult to understand and hard to account for? 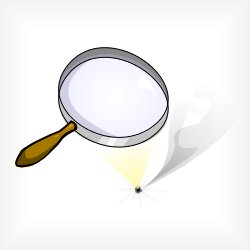 No self-respecting researcher would create a conclusion based on a sample size that was too small. But too often people draw huge conclusions from a sample of one. If an event is big enough, it is easy to analyze and draw plenty of false conclusions and superstitions. Until your sample size is large enough, trying to draw too many conclusions is foolish.

Randomness is too large when you are dealing with an isolated case. If you can get several or even a few dozen successes in an area, then you have a reasonable base to draw conclusions. You can analyze one event to get a few ideas, but it is dangerous to put a lot of weight on a single success or failure.

When I make improvements on this blog I usually try incorporating a new strategy for a few weeks before weighing whether it is an improvement. This is hard to do because the tendency is to immediately abandon what fails once or twice. But only in creating a large enough sample can you draw reasonable conclusions. 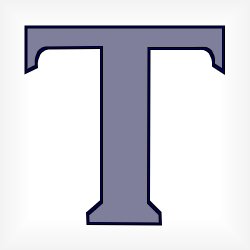 I like using the T-Model for how I read books. Books have an element of chance. Reading a book can take hours of investment and they may not pay off in a lot of new ideas and novel thought. The natural tendency then is to get a really tall T and focus only on reading books within your narrow interests.

Reading dozens of books a year, however, I find the best way to manage the risk of a bad book isn’t just to read in my narrow interests but read a certain amount of books completely outside my current interests. Sometimes this results in a bad read but other times it opens up completely new channels for ideas.

Spreading your attempts applies to more than just reading. If you allocate resources with the T-Model then you are better covered against chance. One of your efforts may fail, but it is compensated by all the other areas of investment.

Don’t ignore luck, use it. Know what you control and what your input is so you can allocate your focus towards it. Don’t waste time drawing conclusions from individual events and conduct personal experiments where the sample size is large enough. Finally spread your attempts enough so that you are better covered for big wins and losses.