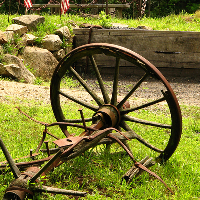 Recently, one of my friends commented that he was a regular gym-goer. Except he hadn’t been to the gym in three months. Before that point, he had been exercising regularly. A few days off turns into a few weeks and soon enough, it’s been three months. Once you’ve fallen off the wagon, it isn’t always easy to get back on.

I’m sure most of us have had a similar experience to my friend. I know I have had many times where I’ve set a habit in place and later slipped. A few years ago, I used to have a highly efficient system for handling all my web-usage. Over time, however, it started to degrade until I was checking my e-mail and stats a few times each day. Several months ago I took the effort to restart that habit and restore my e-mail productivity.

Why Do Your Habits Slip?

Maintaining habits is like maintaining a car. You might get a chip in your car’s paint. Initially, you might be too busy to worry about a small chip. But over time the environment erodes that paint surface, until it rusts and spreads. Given enough time, what started as a small chip might eat away the underlying metal.

Keeping your exercising, studying or work habits sharp also requires maintenance. The first chip in your habits might be a small setback. An injury forces you to rest from the gym for a week. A few late nights disrupt your sleep schedule. A vacation stops your productivity habits.

If you notice this chips early, fixing them is relatively simple. After regularly going to the gym for a few years, if I take a week off, I don’t need too much encouragement to head back. The longer you’ve conditioned a habit, the easier it is to restart after minor glitches.

But if small lapses turn into weeks and months, you might require more work to restart. If you get enough rust in your car, you may need to replace the metal foundation entirely.

How to Stay on That Wagon

If a habit is important to you, such as exercising, waking up early, daily studying, reading or productivity, monitor it. The goal isn’t to be completely perfect. 100% adherence to a schedule costs far too much to be worth maintaining. However, if you see yourself slipping, you can inject the habit into the next few days to stay on track.

A few ways to consider monitoring your habits:

If your habits are rusting constantly, you’ve probably bought a lemon. If you haven’t properly conditioned the habit and integrated it into your life, maintenance will be an uphill battle. Occasionally I do a bit of tweaking to make sure my morning ritual, exercise or reading stays focused. But if that took a great deal of energy, I’d have to consider starting from scratch.

How to Get Back on the Wagon

Even with a monitoring system like I’ve described, I still make slips. Nobody is perfect and the fact that one habit fails doesn’t mean your character is flawed and you’re undisciplined. Restarting a habit can require a bit more work than simple maintenance, but it is usually easier than starting from scratch.

If I’ve left a habit for more than a month, this is usually the process I go through to restore it:

If you let rust continue long enough, it can eat away the metal foundation. Similarly, if you let your habits degrade far enough, there might not be much left to salvage. If you’ve spent six months off your diet or have had a year of sloppy productivity habits, it’s probably better to start from scratch.

Complete restarting requires more than just a simple tune-up. Here’s what I suggest:

Needing to restart a habit isn’t a sign you’re lazy or that it’s impossible to change habits. Instead, work on building a monitoring system to keep your habits from slipping. If they do slip, try to correct the problem before it spreads. And if they keep slipping, consider restarting from scratch to debug major problems.