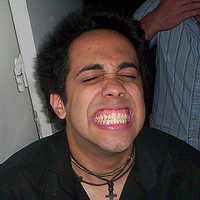 Someone once told me that, “Integrity is being the same person in your house that you are on the street.” More than just integrity, I think that consistency has a huge effect on your self-image. How can you be comfortable with yourself if you feel the need to impress other people?

The people I have the most respect for aren’t trying to get my respect. They are just living their lives. Any respect I have is a side-effect, not the purpose of what they do. Despite this, society is fueled by marketing. Having the right image, resume or introduction can mean better friends, relationships or million dollar business deals.

For a long time I’ve had trouble reconciling this problem. On one side, not trying to impress other people leaves your self-image independent and it is the only route to get genuine respect from other people. However, in a world driven by first impressions, people see the clothes you wear first, and not your integrity.

A friend of mine once told me that he dresses to look good for himself. He doesn’t put the effort in order to impress other people. But even if he dresses for himself, it still impresses other people. Although this was just an offhand comment from a friend, I feel it hints at the solution to the paradox I mentioned at the start of the article.

Although some people who don’t try to impress are cool and non-chalant, most aren’t. Instead, these are the people with unpolished social skills, makeshift appearances and bad resumes. Life isn’t going to reward them, in spite of their integrity.

I think a better approach is the one my friend spoke of. Dress to impress, but to impress yourself. I think that philosophy applies to a lot more than fashion. Any time you’re doing things with the goal of boosting a resume, being popular or marketing to others, you should internalize it. Make your goal to impress yourself, not just the other people around you.

Impressing other people should always be a side-effect of the way you live life, not the main goal. Aside from losing integrity, putting impressiveness first has other dangers. One is that it is harder to stay motivated if the reasons are only superficial.

I certainly don’t want to sound self-important, but the few things I have accomplished in my personal life weren’t done for other people. I didn’t become a vegetarian, start waking up early or read seventy books in a year so I would have blog posts to write about.

A year ago, when I was starting the website, a reader had a recommendation for promoting the website. He suggested I try a crazy stunt like Steve Pavlina’s polyphasic sleep experiment in order to get more attention. While that might have brought in a few visitors, I told him that I never wanted my self-improvement efforts to become a marketing tactic. I’m not saying that was Steve’s motivation for trying out crazy sleeping habits, just that it couldn’t be mine.

How to Impress Yourself

I strive to impress myself. This means setting my appearance, communication style and goals towards what I see as being ideal. This doesn’t mean I ignore all the first impressions and marketing advice. It just means that my main goal is to impress myself and let other people think what they want.

Although this is a freeing mindset, it isn’t easy to accomplish. I’m certainly not perfect and it takes a lot of discipline to keep yourself focused on your ideal self-image, not the immediate reactions of other people. It’s often easier to take a short cut and just follow the opinions of other people than it is to have integrity.

Whenever I see myself focusing too much on impressiveness, I try to turn that focus inwards. Instead of going to the gym to look better for other people, I go to be strong, healthy and look good for myself. Turning those motivations inwards helps you ignore the shallow feedback from other people and focus on your deeper drives.