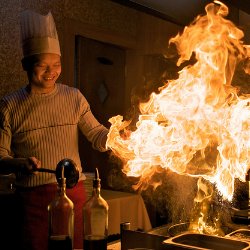 I’m definitely not a chef.

In fact, only six months ago, I would probably have been the last person to write an article like this. I prided myself on my ability to warm canned food. Pasta or the occasional stir-fry were the peak of my cooking ability.

Yet, in the last few months, I’ve made a complete shift in my cooking habits. More precisely, my habits now involve actual cooking.

In just the last week I’ve made gnocchi from scratch, pasta sauces using fresh tomatoes, homemade soup and even hummus without a blender. Considering my former resistance to cooking, I thought I’d share how this transformation happened. And, potentially, how you might be able to discover the joy of cooking too.

Why Cook from Scratch?

For many of you, this article may seem to be a bizarre non-sequitur. What does cooking your own food have to do with getting more from life? Isn’t cooking a backwards, medieval practice that should have been outlawed after the 1950s?

First, as with all my articles, I’m here to show not to preach. If, after reading, you decide to warm up a bowl of macaroni and cheese, be my guest. I simply want to show how I feel this change has had a positive impact on my life.

Second, cooking from scratch has had a positive impact on my life. Here are just a few of the benefits I think go along with the decidedly un-modern practice of cooking:

Beyond just the obvious benefits, I found that once I actually gained a minimum level of cooking skill, cooking actually became fun. Instead of being an agonizing delay in consumption, it was an enjoyable practice of skill.

I had always liked the idea of cooking meals. But the time never seemed to justify it. All that effort, just to have something to eat? Those from my parents’ generation cooked because they had to, I thought. People in the 21st century have better uses of their time.

This turned out to be a complete myth.

Yes, homemade meals take more time. But, not too much more time. Instead of spending 5 minutes to heat up a bowl of soup, I could spend 20 minutes to make one from scratch. The added time in my life spent cooking is probably less than an hour each day, including clean-up.

That’s also an hour per day, total. For some reason, tasks that append an extra fifteen minutes here and there are much easier to fit into your schedule than an uninterrupted hour chunk. Lunches and dinners just get a bit longer, so I’ve hardly noticed the time loss.

The Reason People Don’t Cook: They Don’t Know How

No, it turns out the time myth was just covering up the real reason I didn’t cook: I didn’t know how.

In the past, we were taught how to cook by our mothers and fathers. Many of us still are, but those lessons take a backseat when modern society offers us prepackaged delicacies.

Just as you would never learn to speak a foreign language if you always had a translator, most people of my generation didn’t learn to cook because they never needed to. The path of least resistance wins once again.

The reason I didn’t cook was because my early attempts at self-cooked meals were typically worse than premade food. My first batch of soup made from scratch tasted worse, not better, than canned soup. My first attempt at hummus was watery and far below the standards provided in the supermarket.

I hadn’t realized it yet, but my self-cooking efforts were still below the frustration barrier. I was still at the “I Suck” stage and hadn’t moved into the period of skill acquisition where practice actually becomes enjoyable.

Learning How to Cook

I’m no Emeril. Or even a Julia Child, for that matter. Considering my shift towards cooking was so recent, I’m not going to give you recipe tips or tell you how to flambé a crépe.

But, I’d like to share my thoughts on how I started to cook more, and what triggered that change in me, so hopefully a few people here can benefit.

1. Get the Right Tools

One of the tipping points for me was getting the right tools. Having a proper stove, utensils, bowls and cooking space made it far easier for me to get started. Normally I don’t advocate tool-getting as a first step in any new pursuit, but at least in this case, it reduced the barriers for me to get started.

Most of my first attempts making any food item were sub-par. The gnocchi was gooey, the hummus had too much water, and veggie burgers were a disaster. But that’s okay, because after a few early failures, I started to become decent and could actually enjoy the food.

My rule of thumb is to follow any recipe for a new food item to the letter. Sometimes I’ll still screw it up, even with that rule. But, if you follow a recipe exactly, its way easier to diagnose what went wrong, and avoid making mistakes.

The following times I’ve attempted cooking something, I usually ignore the recipes directly and improvise a little. This speeds up the time it takes to cook, ensures I take advantage of available ingredients and makes the practice a lot more fun.

I don’t say it enough here, but my main reason for pursuing an eclectic mix of knowledge and skills is because I enjoy learning. After early failures, cooking has actually become an enjoyable past-time of mine. Far from being menial labor, its an exercise of a skill I’m becoming better at.

Will I continue cooking my meals from scratch? I certainly hope so. Even if my initial zeal wears off, I expect that some ability to cook will now always be with me and I can enjoy it in the future. That’s the great thing about learning new skills, you never know when you’ll be able to take advantage of them in the future.

A few days ago I made a plate of gnocchi that I made from scratch with potatoes and flour, along with a homemade olive and tomato sauce. I enjoyed it with a fresh baguette, a glass of red wine and the view from my balcony in France.

It was definitely worth the extra twenty minutes.