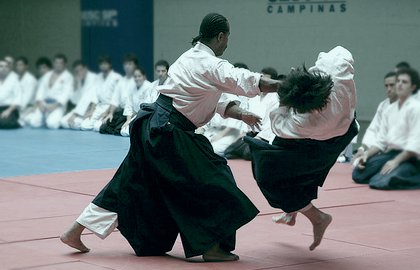 I believe happiness is important, and all else being equal, the happy life is better than the unhappy one.

But this doesn’t mean I believe the ideal life is free from unhappy moments. I have plenty of unhappy moments, and I think that’s okay, perhaps even necessary, to live well.

Some Unhappiness is a Necessary to Live Well

I see a few powerful arguments for claiming occasional unhappiness is essential for the ideal life:

First, there’s the argument that perfectly sustained bliss is impossible. There is strong evidence that genes play a role in determining happiness. That is, we might all have a particular set-point of internal happiness and the goal of self-improvement can only be to shift this set-point–not to disregard it.

Some people will live happier lives simply by being born with a different personality. It’s unfair, but complaining about it is like whining about not being taller. It won’t help and it ignores all the things you can do to live better.

Even if a genetic set-point didn’t exist, uninterrupted happiness is unlikely. I know of no person who has ever lived this way. Ironically, expecting zero unhappiness will probably make you stressed and miserable in the attempt.

Second, there’s the argument that unhappiness fosters happiness. Our most challenging and difficult moments that define us. Pain and sadness carve the space needed to experience real joys.

I wouldn’t go so far as to say all happiness is derived from past pains. Otherwise, what would the point be in striving to live better if happiness can only be gained through misery? However, some unhappiness is often the down payment for future joys.

Third, there’s the argument that happiness versus unhappiness isn’t even the right ruler to be measuring the ideal life. Without a purpose, life is meaningless, happy or unhappy. The question isn’t to live well but to live good.

This argument resonates strongly with me. Going to hypothetical extremes, I’d say a wretched life devoted to a purpose would be closer to ideal than a blissful life without one.

Living good also tends to result in living well. Having a meaning for your life fosters the kind of happiness that normally can’t be attained just by consuming pleasurable things. Whole books have been written on this argument, so I won’t develop it much here, but that doesn’t mean it isn’t a powerful one.

A final argument is that the amount of unhappy moments isn’t what counts. Rather, it’s the direction these thoughts are aimed at that should matter. If pain or depressing moments are channeled properly they become tools for the ideal life instead of a detraction.

Many so-called negative emotions serve important purposes. Fear keeps you from taking stupid risks. Anger ensures you assert yourself against an aggressor. Pain keeps you from putting your hand in an open fire.

Sure, there are times when these emotions backfire. When you’re afraid of risks that don’t have much downside, angry when you need diplomacy or feel pain when you’re objectively fine. But just because you can cut yourself with a saw doesn’t mean saws aren’t useful.

Ben Casnocha cites Jonah Lehrer in writing about the potential function of unhappiness:

“Joe Forgas, a social psychologist at the University of New South Wales in Australia, has repeatedly demonstrated in experiments that negative moods lead to better decisions in complex situations. The reason, Forgas suggests, is rooted in the intertwined nature of mood and cognition: sadness promotes ‘information-processing strategies best suited to dealing with more-demanding situations.’”

Adding, from his personal experience:

“I have long noticed that when I am most joyous and happy I tend to get little real work done.”

Channeling, not Choosing, Your Mental State

Even though you can’t always choose to feel in the short-term, it’s a lot easier to choose what you’re going to do with those emotions, once you have them.

If I get rejected, I usually don’t have the opportunity to choose to react with this the same way I might react to winning a million dollars. I can rationalize, cope or distract myself to lessen the intensity, but getting rejected will still suck.

Aikido is a Japanese martial art that emphasizes “redirecting the force of the attack rather than opposing it head-on.” From this perspective, the attacker’s own aggression can be turned against him.

Similarly, if you’re stuck with a negative emotion, you can redirect that energy back towards something useful. This kind of mental aikido certainly isn’t something I practice perfectly, but I think it’s a better way to look at the problem of unhappy moments.

Two things have happened since I started taking this approach. First, the intensity of negative emotions goes down. Unhappiness doesn’t get a chance to fester when it is properly redirected. Second, the feeling of control increases. Yes, you still feel lousy, but knowing you have some control as to where that energy is going gives a bit of calm in the center of the storm.

For the first step, I’ve started to pay attention to what I’m good at when I’m facing a particular mental state. If I’m angry about something, I’m often better at exercising. When I’ve been rejected, that energy often helps in working harder. Stress allows me to do better on routine, non-mental tasks.

Your deflection strategies will differ from mine, but if you try out many things you may be surprised to find you’re actually stronger, more creative or diligent when caught up in some bout of unhappiness than when you’re joyful.

The second step is perhaps more difficult. Mental states have an addicting quality to them. Good or bad, we want to feed our emotions, not cancel them. Sad people listen to depressing music, not cheerful songs. Even if they don’t like feeling sad, they take steps to intensify that feeling.

This is one reason I’ve found mental aikido more successful than trying to change my emotional state. Since we’re irrationally addicted to the emotions we experience, it’s often easier to convince yourself to take steps to channel that experience rather than change it.

I can recall a time a few years ago after being rejected by some girl I had liked. It was a successful moment of deflection for me because I used a lot of the energy to brainstorm for my own self-improvement. I remember spending more time than usual defining what I wanted from life and re-dedicating myself to putting in the energy to reach that.

During the time I felt lousy. Redirection didn’t change the fact that I had been struck. But it did mean I was able to keep myself from feeling worse, and to channel that remaining energy into something constructive.

My brainstorming session probably wasn’t as successful as if I had been filled with confidence. However, channeling that energy meant that I could accomplish something constructive instead of simply wallowing in the blip of unhappiness.

What are your thoughts? Are there any activities you do better when experiencing an unhappy mental state? Do you practice your own form of mental aikido? Please share your thoughts in the comments!