When I started working on my upcoming book, Ultralearning, I wanted to document people who took on intense and ambitious learning projects, like the MIT Challenge or Year Without English.

I found many examples, but a little voice always nagged in my head–maybe these people were just naturally good at learning!

Tristan de Montebello was one of these volunteers. When I started working with Tristan, he wasn’t even sure what he wanted to learn. He was a guitarist, so for awhile, he was thinking maybe another musical instrument, like piano.

After a few weeks of thinking, however, he decided on public speaking. He had almost no experience giving speeches, and it was a skill he thought might be useful. After all, everyone could benefit from being a better speaker, no?

What followed, however, exceeded both our wildest expectations. In less than seven months, Tristan went from near-zero experience to competing in the finalists for the World Championship of Public Speaking.

This is his story. Enter Tristan…

From Zero to World Championship in Seven Months

I’m on a giant stage in front of 3000 people, broadcasted live, at the finals of the World Championship of Public Speaking.

The crazy thing is that seven months earlier, I knew nothing about public speaking.

Here is what I learned.

Lesson One: People Ignore Advice But Listen To Stories

I signed up for the World Championships with zero public speaking experience. I only had two weeks to write a speech that would win me the first round of competition. The only problem was that I had no idea what a winning speech even looked like.

So I began my research. First, I watched every world championship speech dating back to 1995. Then I rewatched all of my favorite speeches on YouTube. I watched the top ten TED talks of all time. I asked people what their favorite talks were, and I watched all of those too.

I discovered that the best speakers all did one thing remarkably well: tell stories.

So I began crafting an epic story based on a time in my childhood when I was forced to face my fears. I hoped it would be inspiring but when I shared it with my coach, Michael, he was not at all impressed.

In fact, he pointed out that I made a fundamental mistake. One that many novice speakers make.

The insight Michael shared that day changed everything for me:

“If you want to inspire, don’t be the hero of your own story.”

He explained that people don’t want to learn from you, they want to learn with you. For the audience to really connect with me, I needed to take them on a journey where I wasn’t the teacher but the student. The words of wisdom couldn’t come from me; they had to come from other characters in my story.

In my speech, I wanted to inspire people to face their fears. Instead of just telling the audience to go face their fears, I added in a grandmother character to do it for me. She became the mentor, a common figure in all great stories (think Yoda and Dumbledore).

It turns out this was the edge I needed.

On competition day, I was stunned to see that most of my competitors fell into that exact trap. They had inadvertently made themselves the mentors. I believe this is a big part of why I placed first that day. I didn’t win the judges over. My grandmother did.

Takeaway: If you want to inspire, don’t be the hero of your own story.

Lesson Two: You Don’t Need To Be Prepared In Order To Feel Prepared

In two hours, I had to go on stage to give a speech I’d just finished writing.

He answered:  “You don’t need to feel ready.”

At the start of the competition, I learned that most seasoned contestants were speaking only once a week. They could afford it, they were already great speakers. But I wasn’t. For me to have a fighting chance, I would have to speak daily.

So early on, I booked as many speaking engagements as I could.

The only problem was that I wasn’t always ready. There wasn’t enough time in between speaking engagements to write, edit, and memorize new content. I’d often show up in front of audiences with only a few half-baked ideas in my mind. And I would have to improvise the rest.

It was uncomfortable as hell. I often lost my train of thought. I blanked on stage a lot. And I was on the receiving end of many disappointed sighs. But every time I walked on stage, I felt a little more familiar with the uncomfortable feeling of being unprepared

The peak of adrenaline became less and less surprising. I grew more and more confident in my improvisation skills. And I began to deliberately leave empty spaces in my scripts to see what my brain would come up with under pressure.

Soon I had built a deep trust in my brain’s ability to come up with great content on the spot.

I no longer needed to be prepared in order to feel prepared.

Takeaway: To feel more prepared, build the skill of speaking on the spot.

Lesson Three: No One Gets Better Without People’s Opinions

I was 12 years old and I’d just moved to France.

On my first Halloween, I walked into my classroom wearing a full-length wedding dress.

Do you know what I learned that day?

The French do NOT celebrate Halloween.

I delivered this anecdote as my opening line in front of 3000 people in the finals of the World Championships. The response was roaring laughter. It was thrilling, but not surprising. I was certain this joke would hit.

It was guaranteed thanks to the comedian’s approach.

When Chris Rock builds a new special, he doesn’t isolate himself for weeks on end to build an hour of content. He goes to small comedy clubs and tests his material day in and day out. Through this process, he discovers that certain jokes hit and certain jokes miss. Sometimes, people will even laugh at parts that weren’t intended to be funny.

Regardless, he goes home each night and reworks his material based on the audience’s reactions. Then he tries it all over again the next night.

Going into the competition, I knew that the comedian’s approach would be my secret weapon against even the most seasoned speakers. As I was building my speech, I followed the same pattern:

The process made my ideas better, my jokes funnier, and my delivery stronger.

Takeaway: Get feedback before you’re ready to hear it.

7 quick facts about my 7-month project:

What Can You Learn From My Ultralearning Project?

I studied the art of giving a world-class speech for seven intense months. I anticipated that this experience would make me a better speaker. But what I didn’t expect were the side-effects of my training.

After the World Championships, I started to feel more spontaneous in conversations, more relaxed in social gatherings, and more confident in my everyday life. Learning public speaking didn’t just change the way I felt on a stage. It changed the way I felt as a person.

But too many people think that public speaking isn’t something they can learn. They think that you’re either born with it or you aren’t.

If I can leave you with one final thought, it would be this:

Public speaking is a skill. Learning it will change your life. 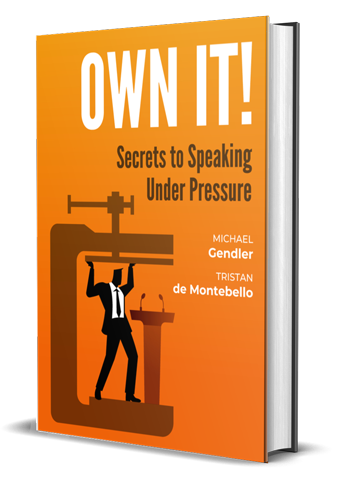 To learn more about conquering your fear of speaking and making pressure an asset, join Tristan & Michael’s newsletter and get a free copy of their eBook: “OWN IT! Secrets to Speaking Under Pressure” (Unexpectedly powerful insights such as using your brain’s autocomplete function, how bowling can help you with on-the-spot speaking, the power of speaking before you think, and more.)

Join and get the ebook